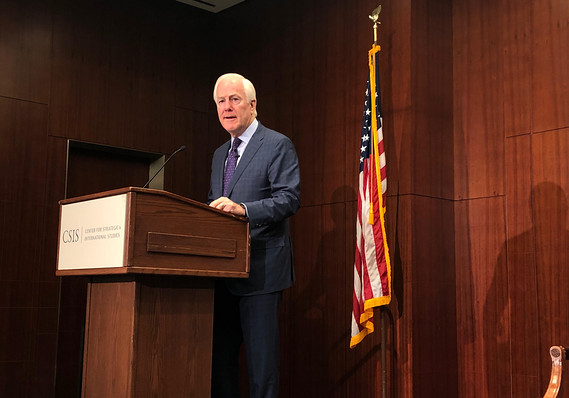 Sen. John Cornyn, a Texas Republican, speaks on Nov. 7, 2019, at the Center for Strategic & International Studies in Washington.

Sen. John Cornyn is seeking to ramp up U.S. oil exports and energy innovation, amplifying his message to voters as Democrats aim to unseat him in 2020.

Speaking Thursday in Washington, the Texan touted a pair of bills he’s sponsoring, in the wake of Democrats’ attacking him after Tuesday’s elections — calling him the next “Trump Republican” in line for defeat.

Cornyn discussed the Launching Energy Advancement and Development through Innovations for Natural Gas Act, which has bipartisan support. The bill would require the Department of Energy to develop carbon capture technology for natural gas production.

The senator is also sponsoring what’s known as the ESCAPE Act, which is aimed at reducing European Union members’ dependence on Russian energy resources by exporting more oil CLZ19, +0.52%  from the U.S.

As Cornyn and Democrats set their sights on 2020, the senator said congressional Democrats’ impeachment inquiry into President Donald Trump could handicap his agenda.

“We’re still at the very early stages of this,” he said at the Center for Strategic & International Studies. “It’s uncertain what we’re going to be able to get done legislatively between now and November. This little thing called impeachment sort of is sucking a lot of the oxygen out of the air.”

He called his bills “certainly high priorities for me, and I think something we need to talk about during the presidential campaign and during these races in November.”

Texas Democrats sense an opportunity as they seek to deny Cornyn a fourth term. The historically red state nearly elected former Rep. Beto O’Rourke last year to the Senate over incumbent Sen. Ted Cruz. Democrat O’Rourke, who recently dropped out of the 2020 presidential race, lost to Cruz by less than three points. O’Rourke has chosen not to run for Senate in 2020.

Cornyn has $10.8 million for his re-election bid on hand.

“His approval ratings are dismal for a guy who has been here for 25 years,” Abhi Rahman, communications director at the Texas Democratic Party, told MarketWatch. A University of Texas/Texas Tribune poll released this week showed 35% of voters approving of the senator’s work, and 34% disapproving.

That same poll showed that his potential challengers are largely unknown, even to their own Democratic primary voters. Nine Democrats are vying to take on Cornyn. MJ Hegar, who unsuccessfully ran for Congress in 2018, is leading the field, the poll showed.

Cornyn highlighted that as of last December for the first time on record, the U.S. exported more crude oil than it imported, and defended fracking against attacks from high-profile Democrats including Sen. Elizabeth Warren.

“If we ban fracking and we swear off all hydrocarbons, how are you going to get from here to pick up your kids at school? You can’t. And so I think that’s the kind of conversation we really need to start focusing on,” he said.

Critics of fracking assert that it has polluted groundwater, increased risks of oil spillages and earthquakes. These environmental concerns have prompted three Democratic presidential candidates — Sens. Kamala Harris, Bernie Sanders and Warren — to campaign on issuing an outright fracking ban.

About 59% of the crude oil the U.S. produces is extracted through fracking, according to the U.S. Energy Information Administration.