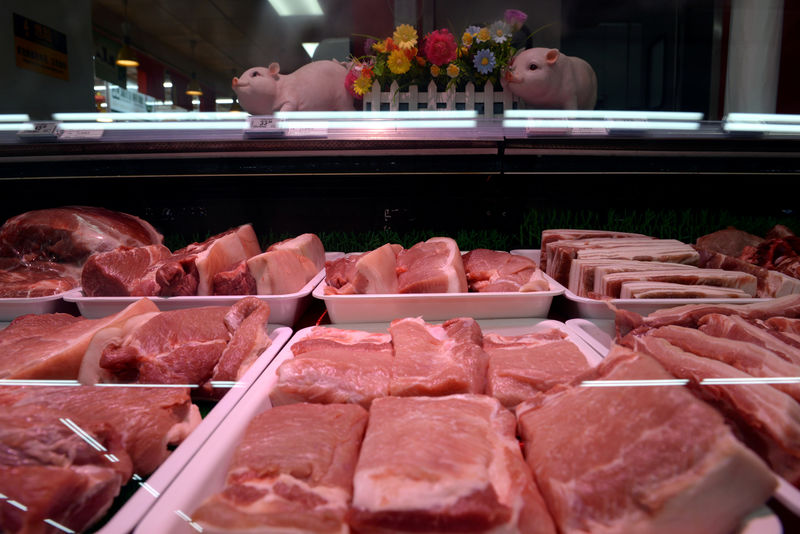 LONDON/BEIJING (Reuters) – China is scouring the world for meat to replace the millions of pigs killed by African swine fever (ASF), boosting prices, business and profits for European and South American meatpackers as it re-shapes global markets for pork, beef and chicken.

The European Union, the world’s second largest pork producer after China, has ramped up sales to the Asian giant although it can only fill part of the shortfall caused by ASF. Argentina and Brazil have approved new export plants to meet demand and are selling beef and chickens, as well as pork, to fill the gap. U.S. producers, however, have been hampered due to tariffs imposed by Beijing.

Other Asian countries are also ready to step up imports as they, too, deal with outbreaks of ASF. Vietnam, the Philippines, North and South Korea, Laos, Myanmar and Cambodia are all struggling to contain outbreaks of the disease, which is deadly to pigs although not harmful to humans.

“It is very good news for those involved in processing and have licenses for exports to China,” said Justin Sherrard, global strategist, animal protein at Rabobank.

Major EU pork processors include Danish Crown, Tonnies Group and Vion Food Group although the market is fragmented with many small- and medium-size players.

Shortages in the world’s top pork consumer have been exacerbated by the upcoming Lunar New Year celebrations in late January, when pork, and pork dumplings in particular, play a central role in the food on offer.

One of the biggest European players Danish Crown said there had been a very clear jump in demand from China in the run-up to the Lunar New Year and it was bullish on the outlook for 2020.

China’s state-owned agriculture conglomerate COFCO said this week it had agreed to buy $100 million of pork from Danish Crown in 2020 to help ease the domestic shortage.

Rabobank estimates that China’s hog herd, the world’s largest, fell by half in the first eight months of 2019 and will likely shrink by 55 percent by the end of the year.

Many more meat plants in Argentina and Brazil have recently been approved to export to China including beef and chicken as well as pork.

Nicholas Lafontaine, a cattle rancher from the town of Azul, 300 kilometers (186 miles) southwest of Buenos Aires, said China had traditionally taken cheap cuts with premium steaks destined for the EU.

China is now taking the whole carcass, reducing the amount of meat sold on the local market for Argentina peso, a currency which has lost around a third of its value this year.

As processing margins have improved, plants have reopened.

“The other benefit that comes from growing Chinese demand is the reopening of beef plants, he said, adding that when a factory opens its doors it is thinking about China.

According to Brazilian meat trade groups, in one go Beijing authorized Brazil to more than double the number of beef plants with permits to sell directly to mainland China — to 33.

Brazil exported 1.64 million tonnes of beef in 2018 with China buying 19.3% of the volume, trailing only Hong Kong. The South American country’s exports have been forecast to rise to 1.8 million tonnes this year.

Hefty tariffs on American pork imposed by China as part of the ongoing trade conflict are likely to mean that the U.S. industry will benefit less than its rivals.

U.S.-based meat packers such as Smithfield Foods have, however, been able to secure some direct sales. Tyson Foods (NYSE:) expects to benefit from African swine fever by increasing sales to China or other countries as the outbreak redirects global meat trading.

Tyson Foods share price has risen about 50 percent so far this year.

Trent Thiele, a farmer who raises about 60,000 hogs a year in Elma, Iowa, said, however, the trade war is hurting American hog producers. Thiele said he would prefer selling U.S. pork to Chinese buyers than picking up residual business elsewhere in the world because China is a main buyer of products such as pigs’ feet and organ meat that other countries have little appetite for. “A lot of our other competitor countries are obtaining the market share that naturally would have been ours if we didn’t have the retaliatory tariffs,” said Thiele, president of the Iowa Pork Producers Association.

Imported pork ribs currently cost around 40,000 yuan ($5,680) per tonne, compared with 17,600 yuan in spring 2019, traders said, while prices for other cuts such as pig front leg and rib meat have roughly doubled in that period.

“Right now, prices are astronomical, and the risk is very high,” said a Beijing-based beef importer, who was struggling to gauge the right volumes to meet demand and avoid being left with expensive stock at the end of the holiday period.

The United Nations Food and Agriculture Organization’s Meat Price Index is up 12.5% so far this year and is at the highest level since January 2015.

The pork component has risen by more than 20%.

The high global pork prices are even sparking interest in pig farming in predominately Muslim Kazahkstan.

“Not a week goes by without someone visiting us who wants to get into pig farming,” said Maksut Baktibayev, chairman of Kazakhstan’s Meat Union, an industry lobby group.