J.P. Morgan has been one of the more aggressive Wall Street shops on stocks for some time, and it is reiterating its overweight call on equities and commodities and underweight on bonds. What’s new is that it’s reversing an overweight in gold to a small underweight, as well as shifting part of its underweight from credit to government bonds.

“We maintain a significant and incrementally larger tilt in our model portfolio towards risky assets, based on signs of a cyclical recovery, easing geopolitical tensions, synchronized monetary easing, and defensive investor positioning across asset classes,” said its strategy team, led by Marko Kolanovic. 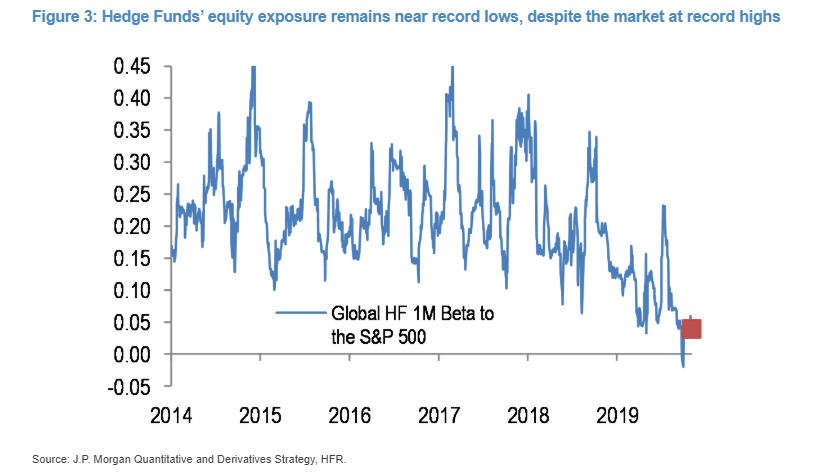 Dumb money? Hedge funds haven’t been buying into the rally.

“Equities tend to price in forward-looking fundamentals, and we believe are therefore likely to look through the current soft patch and increasingly price in the growth rebound expected next year.”

Meanwhile, another bull — Tom Lee of Fundstrat Global Advisors — lifted his year-end S&P 500 SPX, +0.27%  target to 3,185, an increase of 60 points. He cited the increase in the Institute for Supply Management manufacturing export index, that two-year earnings per share growth has been stronger than S&P 500 growth, and the likely Santa Claus rally, referring to typical late-year gains in the stock market around the holiday period.

The state of U.S.-China trade relations has been, and is likely to continue to be, the driver of market direction until a deal is reached. White House officials gave mixed accounts as to its progress on Thursday.

Entertainment company Walt Disney DIS, +1.29%  will be in the spotlight after beating expectations with a $1.05 billion profit as it gears up for the launch of its Disney+ streaming television service. Retailer Gap GPS, +1.86%  may fall after its Chief Executive Art Peck stepped down and the company lowered its profit forecast. The University of Michigan’s consumer sentiment report highlights the day’s economic releases.

Gold is suffering its worst week in more than three years, though futures GC00, -0.33%   were steady on Friday.

If you didn’t catch the Thursday night NFL game, the Oakland Raiders beat the Los Angeles Chargers after yet another soul-crushing Philip Rivers interception.

A bunch of text messages, originally sent on Valentine’s Day, arrived to mobile phone users across America on Thursday.

Popular on Reddit — a chart showing how many houses can be earned per year at the federal minimum wage. It’s not a lot.

No, President Kennedy did not say in West Berlin in 1963 that he was a jelly doughnut.