Home
Stocks
TaxWatch: Elizabeth Warren’s wealth tax would raise money for health care and education — but how much is Bill Gates willing to help out?
Prev Article Next Article 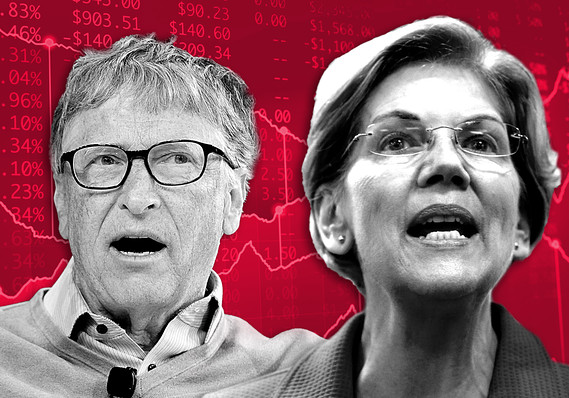 Bill Gates’s fortune would take a tax hit under Sen. Elizabeth Warren’s tax plan — what would that mean for his philanthropic goals?

Bill Gates, co-founder of Microsoft MSFT, +0.14%  and a philanthropist behind the world’s largest charitable foundation, said Wednesday he would mull over how much he would have to pay for Democratic presidential hopeful Sen. Elizabeth Warren’s proposed wealth tax.

Gates made the point to laughter at Wednesday’s New York Times DealBook Conference. “But, you know, when you say I should pay $100 billion, O.K., then I’m starting to do a little math about what I have left over,” he said. “Sorry, I’m just kidding. So you really want the incentive system to be there and you can go a long ways without threatening that.”

However, the debate that’s unfolded since is dead serious: If the feds took a deep cut of the fortunes of the 1% to fund efforts like affordable health care and free college, what would that mean for the philanthropies and charitable causes that benefit from the uber-rich’s largesse?

Under Warren’s “ultra-millionaire tax,” households making at least $50 million would pay a 2% tax on every dollar above that amount and then a 3% tax for every dollar of net worth above $1 billion.

Gates — worth an estimated $106 billion, according to Forbes — would have to pay almost $6 billion annually in addition to his other taxes, according to Andrew Ross Sorkin, the journalist and DealBook Conference host.

Gates is also the co-chair of the Bill and Melinda Gates Foundation, which has given away $50.1 billion for global health and other causes since it was founded in 2000. “To date, we have committed more than $2.9 billion in grants to combat malaria. In addition, we have committed $2 billion to the Global Fund to Fight AIDS, tuberculosis and malaria,” according to the foundation’s website.

Bill and Melinda Gates and Warren Buffett, CEO of Berkshire Hathaway BRK.B, +0.33%, are also the creators of the Giving Pledge, whose wealthy signatories promise to donate more than half their fortunes to philanthropy, either during their lifetime or in their will.

Gates has personally given away $35.8 billion during his lifetime, one quarter of his net worth, while Buffett has donated $38.78 billion, which is almost one-third of his net worth, according to Forbes.”I’ve paid over $10 billion in taxes. I’ve paid more than anyone in taxes,” Gates told the conference. He said he was happy to do so. “If I had to pay $20 billion, it’s fine.”

He added, “You really want the incentive system to be there, and you can go a long ways without threatening that.”

Warren, in response, tweeted: ““I’m always happy to meet with people, even if we have different views. If we get the chance, I’d love to explain exactly how much you’d pay under my wealth tax. (I promise it’s not $100 billion.)”

In the wake of Gates’ comments, University of California, Berkeley professor Gabriel Zucman, one of Warren’s advisers on her tax proposal, said Gates would still fare quite well under Warren’s proposed tax.

Here’s a little math for you, @BillGates: If the Warren wealth tax had been in place since 1982, you would have $13.9 billion left over today

People should be worried about the potential impact on philanthropy of Warren’s wealth tax, among other possible consequences, said Nicole Kaeding, vice president of policy promotion at the National Taxpayers Union Foundation, a right-leaning think tank.

Foundation endowments are tied to a wealthy person’s assets, Kaeding noted. And if assets are heavily taxed, it’s that much less to go toward philanthropy. A foundation either has “to reduce giving, or the endowment is going to shrink,” she said. All of Warren’s tax proposals would generate an estimated $26.3 trillion over a decade, Kaeding said.

Gates has previously said he supports higher taxes on the wealthy, including increasing the estate tax. “I’m all for super-progressive tax systems,” Gates said at the Wednesday event.

Don’t miss: Fewer Americans are giving money to charity and it could be because they’re spending less time with God

Another member of the National Taxpayers Union Foundation recently analyzed the impact of Democratic presidential candidate Sen. Bernie Sanders’ even more expansive wealth tax. Sanders’ combined tax bill for the Gateses and their foundation would be $11 billion in the first year alone, according to the estimate. That’s more than double the $5 billion the Gates Foundation handed out to grantees last year.

Even if Warren’s wealth tax left him with a comparatively smaller fortune of $13.9 billion, Gates would still have enough to make a lasting mark on the greater good, said Benjamin Soskis, a research associate at the Urban Institute, a left-leaning think tank.

The thought that almost $14 billion “would leave you philanthropically impoverished, I think, is problematic. Especially since we know a lot of very, very wealthy people are sitting on their assets and not channeling them to foundations,” he said.

See also: Wealthy taxpayers have one big advantage with the IRS (that has nothing to do with Trump’s tax reform)

Soskis supports the idea of a wealth tax and acknowledged Gates wasn’t taking a hard-line stance against any tax increase for the wealthy. Instead, Gates was bringing up a valid question about how much tax revenue is needed for the government and how much money philanthropy needs to thrive, Soskis added. “That’s a conversation that seems to me worth having,” he said.