Home
Stocks
In One Chart: What’s your ‘wealth number’? Find out how rich you are on a scale from minus-2 to 11
Prev Article Next Article

Ever wonder where you fit in, in terms of personal wealth, on a scale from “subsistence farmer” to Jeff Bezos?

If so, Bloomberg Businessweek is here to help.

“Millionaire” doesn’t cut it anymore, according to economics editor Peter Coy, who says it’s too broad, as it covers “everyone from random pikers with a scant $1 million in net worth all the way up to people just shy of billionaire status.”

So Bloomberg developed a wonky scale based on scientific notation, or powers of 10. One million is 10 to the sixth power, so a basic millionaire is a 6. Someone with $1 is a zero and someone with a dime (or one-tenth of a dollar) comes in at minus-1. Less than that — negative net worth — and it’s minus-2. 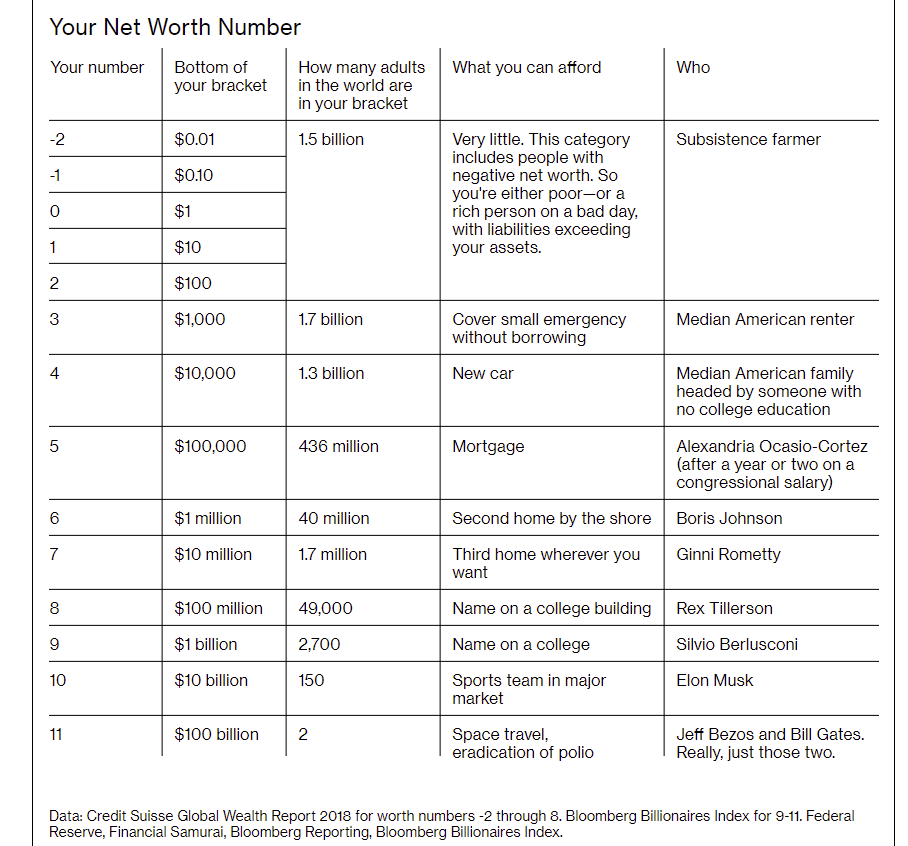 As you can see, the biggest cohort comes in at the 3 level, and that includes the median American renter with a net worth of $1,000, which covers a small emergency without borrowing. Only two people, Microsoft MSFT, +1.18% founder Bill Gates and the aforementioned Amazon AMZN, -0.13% founder, get the 11 designation.

Tesla’s TSLA, +0.48% Elon Musk is stuck at 10, while Democratic congresswoman Alexandria Ocasio-Cortez is midpack at 5.

“It’s a bit appalling that disparities in wealth have gotten so big that we need logarithms to describe them,” Coy wrote. “But that’s the world we live in.”