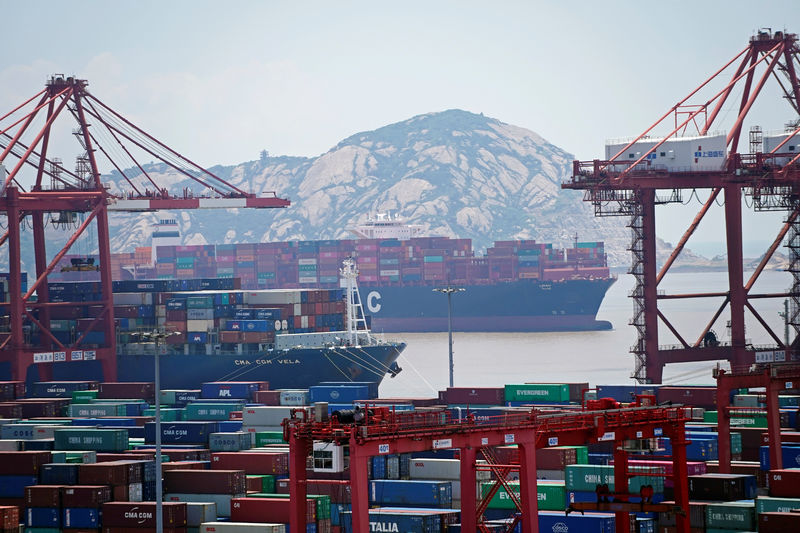 © Reuters. Containers are seen at the Yangshan Deep Water Port in Shanghai

WASHINGTON (Reuters) – U.S. President Donald Trump said on Saturday that trade talks with China were moving along “very nicely,” but the United States would only make a deal with Beijing if it was the right deal for America.

Trump told reporters at Joint Base Andrews before leaving for a visit to Tuscaloosa, Alabama, that the talks had moved more slowly than he would have liked, but China wanted a deal more than he did.

“The trade talks with China are moving along, I think, very nicely and if we make the deal that we want it will be a great deal and if it’s not a great deal, I won’t make it,” he said.

“China very much wants to make a deal,” Trump added. “They’re having the worst year they’ve had in 57 years. Their supply chain is all broken, like an egg, they want to make a deal, perhaps they have to make a deal, I don’t know, I don’t care, that’s up to them.”

“There was a lot of incorrect reporting, but you will see what I’m going to be doing,” he said.

“There’s a difference on tariffs, but we can always get tariffs,” he said.

“The level of tariff lift is incorrect,” Trump said in reference to news reports. He did not elaborate.

Officials from both countries said on Thursday that China and the United States had agreed to roll back tariffs already in place on each others’ goods in a “phase one” trade deal to end a damaging trade war, but the idea has been met with stiff opposition within some quarters of the Trump administration.

On Friday, Trump, in comments that hit stock prices and the dollar, said he had not agreed to a tariff rollback. “I haven’t agreed to anything,” he told reporters then.