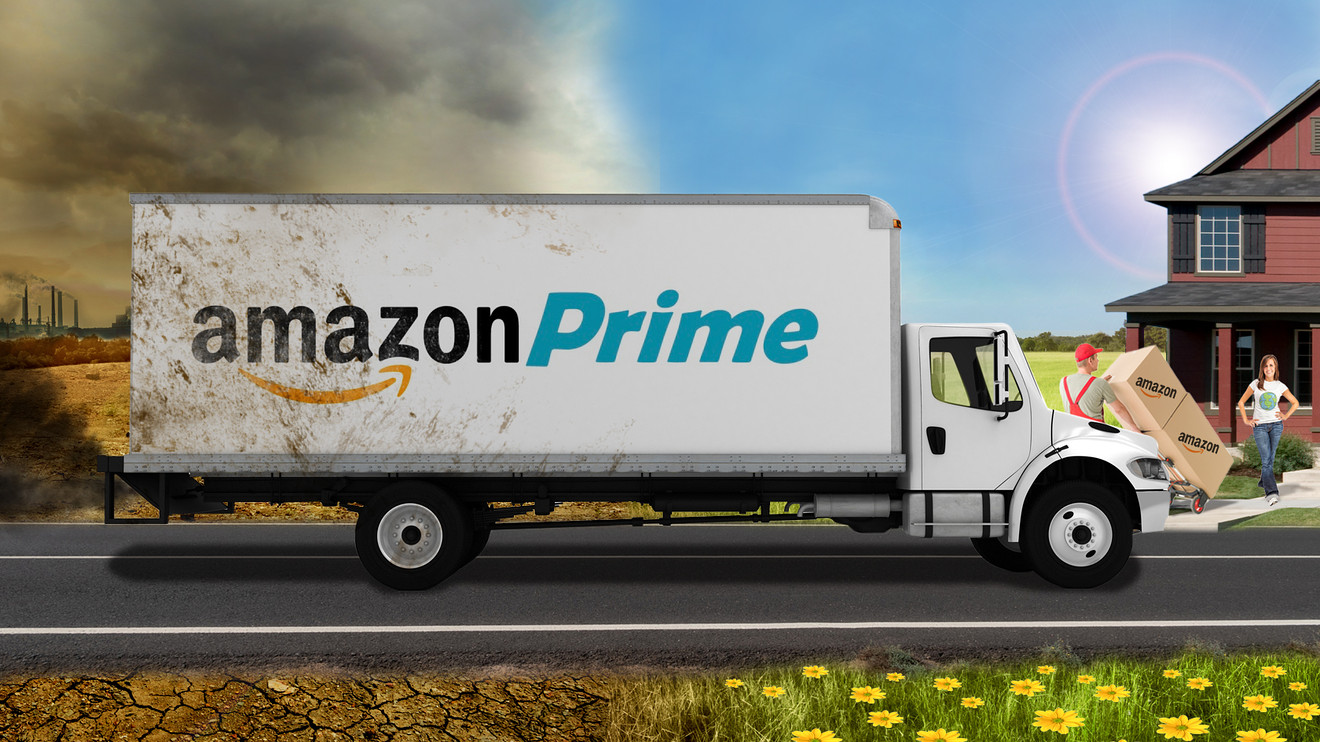 Amazon has streamlined online shopping so much that most of us think nothing of clicking “buy now” and finding a package on our doorstep before we’ve eaten the next day’s dinner.

The mega-retailer has roughly 100 million subscribers to its $119-a-year Prime program, all of whom can get free one-day shipping on 10 million products. It recently expanded same-day delivery for Prime members for the holiday shopping season, and just rolled out free grocery delivery with a one-hour delivery window in most cities.

That convenience packs an environmental punch. Packages usually arrive in fossil-fuel-burning trucks, after having traveled sometimes thousands of miles from wherever the products were made by cargo plane or other freight transport. Those deliveries — which studies have shown create a ripple effect of traffic congestion — produce greenhouse gases that contribute to climate change, which 11,000 scientists recently described as an “emergency.”

E-commerce could be an ‘environmental asset’

It doesn’t have to be this way.

“There’s definitely the potential for delivery services to be an environmental asset,” said Anne Goodchild, director of the University of Washington’s Supply Chain Transportation and Logistics Center. Just as mass transit moves lots of people efficiently, there are better ways to move goods. The postal service accomplishes that fairly well, with a consolidated system where one postal worker comes to a neighborhood to deliver all the mail in one trip, she noted.

‘It actually turns out that as you increase the speed of delivery, you have less carbon. That is counter intuitive.’

Online shopping can be less damaging to the environment than brick-and-mortar retail when, for example, it replaces instances where people drive 15 miles alone in their SUV to and from a store to buy a few groceries, said Miguel Jaller, co-director of the Sustainable Freight Research Center at the University of California, Davis. “E-commerce has the potential to be better for the environment,” he said. “However, for that to happen all the logistics have to be efficient and clean.”

What Amazon is doing to make deliveries easier on Earth

Amazon AMZN, -0.83%   is moving in that direction. It now moves most of its inventory without air transport, a spokesman said, and it pledged this year to make 50% of its deliveries “net zero carbon” — meaning they won’t create any harmful emissions — by the year 2030. In 2021, it will start making some deliveries with a fleet of electric vehicles, and says it aims to put 100,000 electric vehicles on the road by 2030.

What Amazon customers can do

There are also steps Amazon customers themselves can take to lessen the environmental impact of all that free next-day shipping. Here are some, based on interviews with sustainable shipping researchers and other experts.

Patience pays off for the planet. Delaying a delivery’s arrival means fewer trucks are on the road, and cuts down on the number of trucks that aren’t fully packed with deliveries. Customers who wait up to five days for home delivery could help decrease carbon dioxide emissions by about 30% in the last mile of a delivery, according to research by Josue Velazquez, a research Scientist at the MIT Center for Transportation and Logistics.

Amazon gives Prime members either instant discounts or “rewards on future purchases” when they opt for free “no-rush” shipping (six business days) on some items. (Some consumer advocates have questioned the value of those discounts.)

But rewarding people for delaying delivery with incentives to shop more may not do much for planet Earth in the long run, Jaller noted. “Because they are incentivizing people in a way that makes more sales for them, I don’t know if the benefit washes out, because it means more shopping and more delivery for them,” he said.

Introduced in 2008 to soothe customers who were fed up with extricating products from plastic clamshells, Amazon’s “frustration-free packaging” is easy to open and uses less paper and plastic. It’s also 100% recyclable. The packaging isn’t available on all items. To get it, add “frustration-free packaging” into the search field when looking for products on Amazon, said Shannon Kenny, author of the sustainable living blog Mama Eco. It’s one of the tips in a guide she wrote on how to make Amazon orders more eco-friendly.

Group items into one shipment

Prime Members can do this by choosing Amazon Day, which allows them to get all of their Amazon deliveries on a day of the week of their choosing. Non-Prime members can choose “fewest possible packages” to consolidate their orders.

‘E-commerce has the potential to be better for the environment. However, for that to happen all the logistics have to be efficient and clean.’

“The best way to reduce our individual carbon footprint is to group orders into a single order rather than spread them out over multiple days,” said Jim Hull, senior director of industry strategy, retail for JDA Software, a supply chain management platform.

“Vehicles are least efficient when stopped, so by consolidating to a single order day, they are theoretically eliminating multiple other stops at their address that week. This benefit starts to wane in really dense markets (the argument being the truck was going to your address today anyway), but my sense is this would only apply to the most dense and Amazon-penetrated markets.”

Use the Amazon Second Chance program

“It’s common knowledge that air pollution is harmful to human health, but new research is multiplying our understanding of its impacts on worker productivity, recruiting top talent, and the economy,” said Aileen Nowlan, senior manager of EDF+Business. “The ability of Amazon and other last-mile companies to meet growing customer demands depends on their ability to not only reduce emissions but also to improve air quality.”

Kenny advises Amazon regulars to go the company’s Contact Us page, open a chat window and send a note explaining that they’d like Amazon to cut down on pollution and plastic as much as possible. Feedback could go both ways: MIT’s Velazquez says he’d like to see Amazon add a button that warns consumers with messages like, “This shipping option is the equivalent of killing 300 trees.”

Don’t buy as much stuff

We’ve all heard the phrase “reduce, reuse, recycle.” There’s a reason “reduce” is first on the list, Goodchild said. “We can’t solve the climate problem only by modifying the way things get to us,” she told MarketWatch. “When we buy things we want to do our best to have a lower environmental impact. But the act of buying things in and of itself is very impactful.”

One possible strategy: Try giving yourself a waiting period. Kenny has heard of people who put something in their Amazon cart but wait 30 days before clicking buy. At the end of the month, there’s a chance you may not need that product as much as you thought you did.

“It actually turns out that as you increase the speed of delivery, you have less carbon. That is counter intuitive,” Amazon founder and CEO Jeff Bezos said when he announced the company’s environmental goals. That’s because one-day and same-day deliveries can’t be made with air transportation, Bezos explained, so the inventory comes from warehouses that are “very close” to customers. “A result of building those fulfillment centers very close to the customer, you’re actually transporting the products in a very efficient way, a very short distance,” he said.

A company spokesman told MarketWatch that the fastest delivery options, such as one-day and same-day shipping, come from local inventory storage, “traveling shorter distances that are less carbon-intensive.” Spokesman Sam Kennedy added, “We’ve strategically grown our network in the U.S. to include 110 fulfillment centers, 40 package sortation centers, 100 delivery stations, all to be closer to our customers. This allows Amazon to work smarter based on decades of process improvement and innovation, and to deliver orders faster and more efficiently.”

‘We can’t solve the climate problem only by modifying the way things get to us… The act of buying things in and of itself is very impactful.’

But three shipping experts questioned that assertion. While Amazon’s fastest shipping options have certainly become more efficient and less environmentally damaging than they were a few years ago, Jaller’s research has shown that one and two-hour deliveries “will never be better than longer timelines,” he said. When the delivery window is shortened to two hours, it’s impossible to consolidate many packages into one vehicle making one trip. There’s more back and forth to the warehouse, creating more emissions per package than a larger van would, Jaller said.

“It sounds to me that they’re comparing something from say Asia to sourcing it from a warehouse,” Goodchild said of Amazon’s assertion that faster shipping is better for the environment. “But the goods don’t begin their life at the warehouse. They came from somewhere. They’re leaving out a piece of that system that needs to be included. It’s an incomplete statement.”