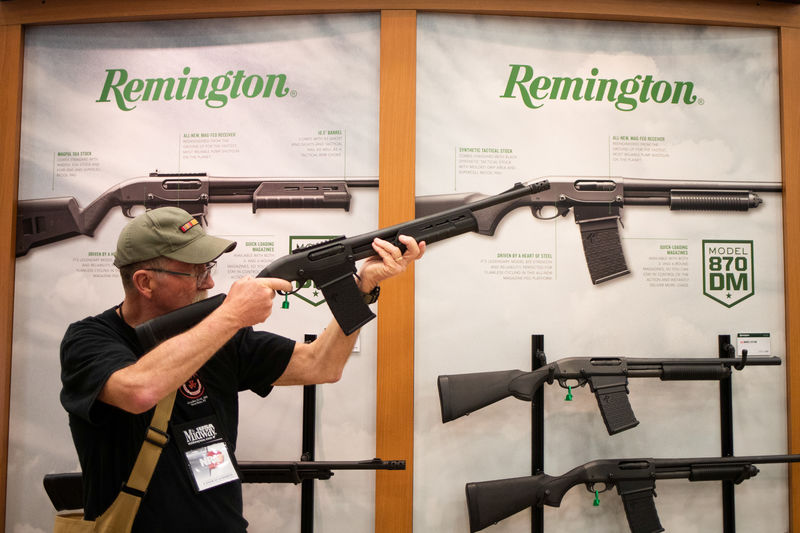 © Reuters. A man aims a Remington firearm at the annual NRA meeting in Dallas, Texas

(Reuters) – Whitebox Advisors LLC, a credit-focused hedge fund, has been quietly capitalizing on Wall Street’s ambivalence toward gun manufacturers by replacing some banks as a lender to Remington Outdoor Company.

Whitebox, whose assets under management have grown from $2 billion to $6 billion in the last six years, became a major lender to Remington this year, according to people familiar with the transactions that allowed it to build its position.

Minneapolis-based Whitebox refinanced a $193 million loan to Remington that had been provided by seven banks, according to the sources. Many of the banks have been under pressure from their customers and some politicians to sever ties with the gun industry.

Remington, the maker of an AR-15-style semi-automatic rifle used in the Sandy Hook Elementary School shooting of six adults and 20 children in 2012, filed for bankruptcy in 2017 amid declining gun sales. It exited bankruptcy last year, but still faces a lawsuit from the families of the Sandy Hook victims in the U.S. Supreme Court over its role as a gun manufacturer.

Whitebox’s investment in Remington illustrates how some hedge funds, whose investors include pension funds, financial institutions and high-net-worth individuals, do not share the same reputational concerns as many banks. It also underscores the emergence of hedge funds as “shadow banks,” replacing traditional lenders to companies.

“Given the baggage of these particular loans for banks that are public companies, it is an invitation to hedge funds to get in and relieve the bank of an asset they don’t really want to hold,” said Campbell Harvey, a professor finance at Duke University. “A hedge fund is a private entity, it doesn’t need to answer to public shareholders.”

Whitebox, which was a creditor of Remington before it filed for bankruptcy, first stepped in to replace Bank of America Corp (NYSE:) as a lender last year, according to the sources.

The bank had vowed it would stop financing “military-style” weapons during Remington’s bankruptcy, after a former student of a Parkland, Florida, high school massacred 17 people with an assault rifle in February 2018.

Whitebox bought Bank of America’s $43.2 million portion of a $193 million asset-backed loan to Remington at a discount to its face value, one of the sources said. That left six other banks still participating in the loan.

Whitebox doubled down on its investment this spring, helping Remington refinance the asset-backed loan, the sources said. The loan, which Remington arranged as part of its bankruptcy last year, had a three-year maturity, and it is not clear why Remington pursued the refinancing.

The loan that WhiteBox extended has dibs on Remington’s assets, protecting Whitebox in any future debt restructuring, one of the sources said.

Whitebox is now the only holder of that loan, that source added.

A Wells Fargo spokesman declined to comment specifically on Remington, but said “the bank has not picked a side in the gun violence prevention debate like some of its big bank peers.”

“We do not believe that the American public wants banks to decide which legal products consumers can and cannot buy,” the Wells Fargo spokesman said.

Deutsche Bank, Bank of America, Regions Financial, Synovus Financial, Fifth Third and BB&T all declined to comment. Remington did not respond to a request for comment.

Some 30 potential lenders turned down Remington for bankruptcy financing in 2017, many citing public backlash against firearms as the reason, according to a bankruptcy court document at the time.

Private equity firm Cerberus Capital Management LP, which lost control of Remington in the bankruptcy, had promised to divest the company following the Sandy Hook shooting, but ended up only allowing some of its buyout fund investors to exit their position.

Whitebox has not financed a gunmaker other than Remington, one of the sources said. The hedge fund has been stepping up its bets on distressed debt, and has been involved in the restructuring of Puerto Rico’s debt, department store Sears’ bankruptcy and gaming company Caesars Entertainment Corp.

Whitebox’s longest-standing fund has seen annualized returns of more than 16% since inception, according to one of the sources. Its founder, Andy Redleaf, stepped down this year, passing the baton to senior portfolio managers Rob Vogel and Paul Twitchell.

Remington still makes AR-15-style weapons that are lightweight and known for their “hair-splitting” accuracy, according to its website. Some of the guns are marketed for hunters of coyotes, foxes and bobcats.

The gun company continues to face a challenging retail environment, with one of its biggest outlets for sales, Walmart (NYSE:) Inc, saying this year it would stop selling ammunition for handguns and some assault-style rifles in its stores.