After Wall Street stocks closed out last week at record highs, a breather seems to be in store.

Investors appear cautious on Monday after violence ramped up in Hong Kong (see below) and President Donald Trump spoke of slow trade-talk progress over the weekend. Of course, it would only take a positive trade-related comment or two to jump-start equities again.

Meanwhile, talk is starting to make the rounds of a so-called Santa rally that has typically—but not last year—powered gains at the end of December. Our call of the day from Miller Tabak + Co.’s lead strategist Matt Maley, says if you want to know if equities have some juice left this year, look to one bullish sector for clues. 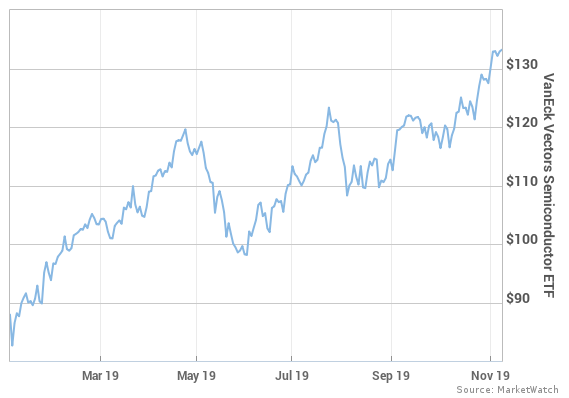 “At its highs from last week, the SMH semiconductor ETF SMH, +0.21%  [VanEck Vectors Semiconductor ETF] closed 7.8% above its old record highs, so that definitely qualifies as a ‘meaningful’ breakout,” said Maley, in a note to clients. That last bit refers to when a stock moves up—in this case, as it can also be down—after a period of moving sideways.

Maley said chip stocks are starting to look a bit overbought, meaning a decline may be on the horizon, though that would have to be severe before it becomes a problem.

And if those stocks follow that with yet another higher-low/higher-high sequence—technical moves that indicate a stock or group of stocks are headed up—it “will be very bullish for the entire stock market,” says Maley.

Read: Deutsche Bank says this is the biggest risk to stocks in 2020

Asia stocks fell across the board, led by the Hang Seng Index HSI, -2.62%, shown in our chart of the day, after Hong Kong police shot an antigovernment protester amid escalating violence. 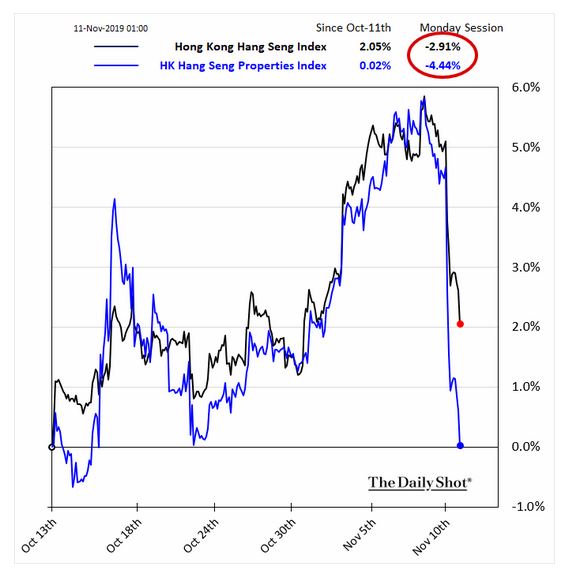 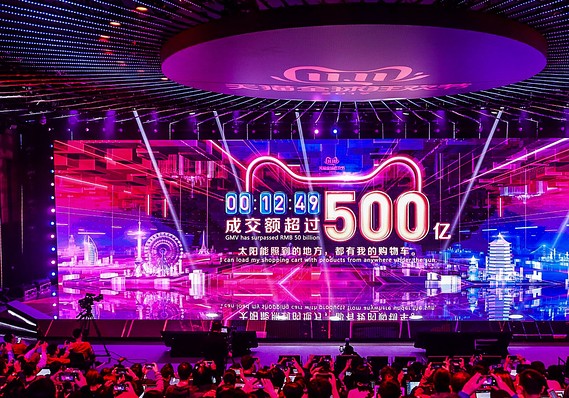 Racking up those Single Day sales on Monday

Nearly $60 billion—that is the amount Chinese e-commerce giants Alibaba BABA, +0.27%  and JD.com JD, -0.15% have raked so far for Monday’s Singles Day, the world’s busiest online shopping day. It started as a protest against Valentine’s Day, for people to celebrate their single status.

New York regulators are probing the new Apple Card algorithms for gender bias after a series of viral tweets. The credit card is a joint venture between tech group Apple AAPL, +0.27%  and Goldman Sachs GS, -0.17%, the bank, which rejected the idea of any discrimination regarding credit limits. Apple did not respond to a request for comment.

In its preliminary IPO prospectus, Saudi Arabia’s state-owned oil group says it will sell up to 0.5% of shares to individual investors.

After Monday’s holiday, the rest of the week’s highlights include consumer and producer prices, along with retail sales. Check out a preview here.

“Is that gonna solve any of those problems?”—That was JPMorgan Chase JPM, +0.29% Chairman and Chief Executive James Dimon, who said in an interview that wealth inequality is a big issue, but cutting his salary won’t help.

Check how rich you are with this wealth scale.

Man bets everything on a cryptocurrency, ends up with $10 million.