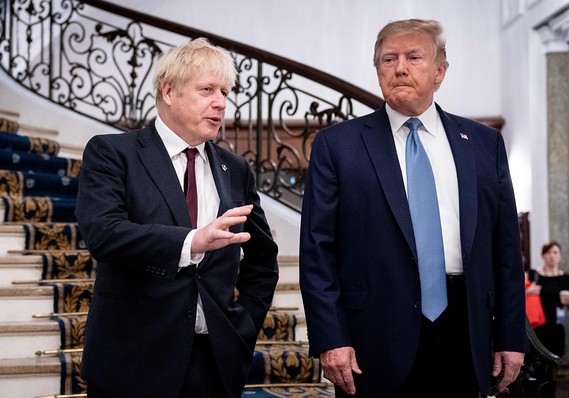 Boris and Donald may be on to something.

The global economy is in a funk and Western policy makers are at sixes and sevens about what to do. Analysts blame President Donald Trump’s tariffs and the U.K.’s Brexit for creating uncertainty among businesses and slowing investment, but other forces are more important.

Once better clarity emerges, however, these policies could well set the global economy on a new, more productive path.

For decades, economic growth slowed in the West—and more recently in China—owing to technological and demographic trends and bad economic policies.

However, China’s protectionism inspired much wasteful investment and exports to the West exceeding those justified by its legitimate comparative advantages. Consequently, lost earnings from intellectual property and overly rapid displacement of manufacturing jobs slowed growth in North America and Europe and disrupted rust-belt communities.

The euro EURUSD, +0.1271%   is chronically undervalued for Germany and overvalued for Italy and other Mediterranean economies. Along with eurozone limits on how much the governments in the South may borrow, those imposed additional unemployment in the South and poorly allocated capital most everywhere in Europe.

And now Germany’s industrial sector is struggling to catch up with the shift to electric vehicles.

Consumers are reaching satiation on stuff. Just about everyone who wants a car, smartphone, laptop or widescreen TV in the West has one, and car sales have declined 15 of the last 16 months in China.

In recent years, services, software and social media held up demand in the West, but those businesses take a lot less capital to expand than heavy industry. Globally, aging populations are driving up savings as a share of GDP — folks are visiting Vanguard’s website for retirement investments more and GM’s websites with an interest to buy less.

Artificial intelligence, robots and the like are hollowing out good paying jobs in the middle and boosting demand and pay for high-paying technicians and professionals. Coupled with trends toward more two-earner families and few children, those are creating more low-paying jobs to clean homes and deliver meals.

A carbon-free economy will have similar consequences. Electric cars have fewer components, are easier to assemble, and require less maintenance than gas-powered vehicles. Solar farms don’t require rail tracks, locomotives and pipelines or armies of miners and roughnecks to keep steam turbines supplied with fossil fuels.

Those forces combine to create less demand for traditional drivers of growth—investment in structures and durable goods for manufacturing and the housing sector to accommodate more children—and worsen income inequality.

The latter are why we have Trump and Prime Minister Boris Johnson—they are creatures of slow growth and inequality, not its creators.

China for too long has relied on state-boosted lending for manufacturing and infrastructure—resulting in much wasteful investment. Now it is enduring record defaults—particularly menacing to the global economy given how much of that debt is denominated in dollars.

America perhaps wastes more capital than China with excessively expensive health care and higher education. The $1.6 trillion student debt is a terrible drag on new home construction and the birth rate and much student debt may never be repaid.

German and Italian banks have not adequately restructured in the wake of the financial crisis. The Bank of Italy can’t print currency as the Fed did to shore up balance sheets and enable reforms without sinking banks.

Trump’s tariffs won’t result in a trade agreement that genuinely reform China. President Xi Jinping is digging in on autocracy and state-directed capitalism.

Once it sinks into business expectations that most or all of Trump’s tariffs are permanent, investment in factories and supporting services outside China, such as in Vietnam, will accelerate.

If Boris can pry Britain loose from the EU, then it will prosper and offer Italy and Spain a stark example of what breaking away from Brussels can provide. It’s the first nail in the coffin for the failed European project — something essential to resurrecting the continental economy and breaking the grip of Germany’s currency advantage.