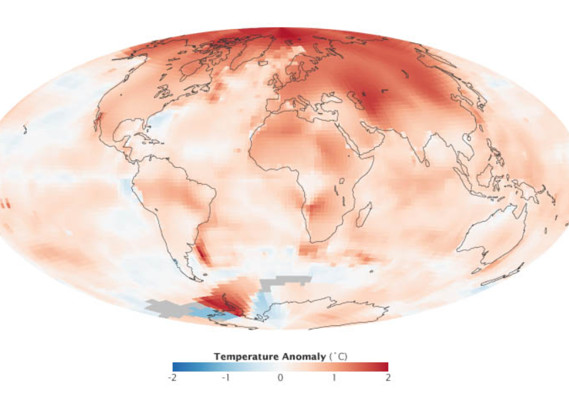 LISBON, Portugal (Project Syndicate) — Because it poses an existential threat to humanity, climate change represents the bad kind of disruption. But it can — and must — be fought with the good kind of disruption: innovation. Since the Industrial Revolution, disruptive innovation has generated growth, created jobs, and opened new avenues for investment.

And in the case of climate change, it could save humanity, by accelerating global efforts to reduce greenhouse-gas (GHG) emissions. In fact, innovation will be absolutely necessary for a successful transition to a green economy that leaves no one behind. Without it, we have less chance of achieving genuine sustainability.

The only way to get ahead of a crisis as large as climate change is through groundbreaking technological innovation in clean energy and low-carbon technologies. And that, in turn, will require efforts to mitigate investment risks for private-sector actors, who cannot be expected to ignore their own bottom lines.

The alternative, of course, is unthinkable. To understand the extent of the threat posed by climate change in the event that we do nothing, consider where we are today. Average global temperatures have already risen by almost 1°C above pre-industrial levels, owing to the accumulation of GHGs in the atmosphere; and two-thirds of that increase has occurred since 1975.

If the trend continues, global average temperatures could rise by 4°C by the end of this century.

If that doesn’t sound like much, remember that our climate is fragile. Small changes in surface temperatures will cause big problems. When average temperatures were 4°C below pre-industrial levels, much of Europe was buried beneath several kilometers of ice. Just imagine what a world that is 4°C warmer than today might look like.

Nonetheless, I am confident that effective, disruptive ideas are out there.

Floating windfarms, for example, can unlock clean wind power for the dozens of countries whose coastal waters are too deep for traditional offshore facilities. And advances in technologies based on waste-eating bioluminescent bacteria promise to illuminate our streets and factories.

Now read this: Climate change will break the housing market

To bring these solutions to scale, we need to put more financing into the right hands. We also need to encourage industries to be more creative, and to pursue more breakthrough technologies.

Innovative disruption needs to happen fast. According to the International Energy Agency, only seven of the 45 energy technologies and sectors assessed in its most recent Tracking Clean Energy Progress report are on target to meet its Sustainable Development Scenario, which is aligned with the global commitments enshrined in the 2015 Paris climate agreement.

Hence, for the policy makers, technologists, executives, and entrepreneurs, the question is: Where do we go from here?

Citizens across the European Union and around the world are demanding action to tackle climate change. This growing awareness of climate risks is filtering into the public debate.

Moreover, under its new president, Ursula von der Leyen, the European Commission has proposed a European Green Deal to enshrine 2050 carbon-neutrality targets in law, with the goal of positioning Europe as a leader in the circular economy and clean technologies of the future. Europe could reap significant economic benefits as a first mover on climate action.

But European industries first must show that they want to be part of the effort. They need to innovate, create new solutions, bring new products to market, and get to work on breakthrough technologies. Investments are urgently needed to drive down the cost of new technologies, increase efficiencies, support first movers, and create new markets.

Of course, even if the private sector is committed fully to climate action, business leaders cannot ignore the bottom line. Putting money into new technologies and business models is risky, and the outcomes are never guaranteed.

This is where public investment banks have a key role to play. As Europe’s climate bank and a global leader in green finance, the EIB intends to expand its support for Europe’s transition to a sustainable, zero-carbon economy.

When it comes to innovation, institutions like the EIB can adopt a long-term view that isn’t always feasible for private-sector actors. By reducing risks and enabling multiple technological pathways, we can create new, greener opportunities for all sectors.

Identifying promising green projects and directing capital toward them is a major challenge.

Yet, acting as incubators, development banks like the EIB can mobilize the private sector behind such investments. By offering innovative financial instruments, experience, and expertise to investment partners around the world, public institutions can empower inventors, entrepreneurs, and large companies to take on the climate challenge.

At the same time, we must not forget those who stand to be harmed the most by climate change, or those who could be left behind in the shift to a low-carbon economy.

To ensure a just transition, we must increase support for vulnerable regions and communities. Support for innovation must also include backing for education and training, so that the next generation will have the skills needed to contribute to a low-carbon economy. We should be cultivating the talents and intelligence of our youth, because it is they who will be developing the technologies and creating the jobs needed for the future.

The EIB will be working closely with European firms and other partners around the world to spur disruptive innovations. The green economy offers many pathways for investors and companies, and the world’s international financial institutions should be paving the way toward even more opportunities.

Ambroise Fayolle is Vice President of the European Investment Bank.

This article was published with permission of Project Syndicate — Disrupting Climate Change Through Innovation.