It’s as bad a time for the global economy as any since the end of the last recession, according to two separate surveys released on Monday.

The IHS Markit global business outlook—which surveys 12,000 companies three times a year—fell to the worst level since 2009, when data was first collected.

The Ifo world economic outlook, which surveys 1,230 people in 117 countries, fell in the fourth quarter to the worst level since the second quarter of 2009.

Markit’s poll found optimism for activity, employment and profits in the year ahead were all at the lowest level since the financial crisis. Markit also reported a decline in planned investment spending, with inflation expectations at a three-year low. 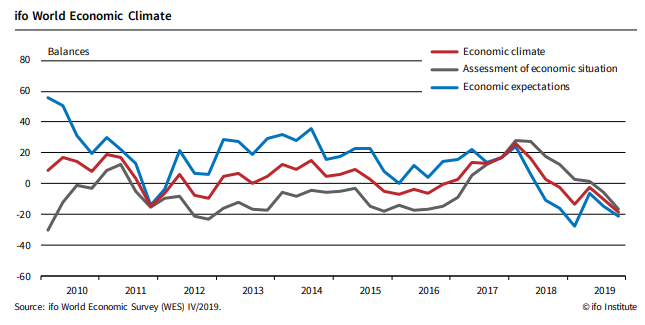 The weakness in business surveys contrasts with newfound financial-market optimism. Though down on Monday, U.S. stocks have rallied over the last month, with the S&P 500 SPX, -0.36%   rising nearly 4%.

Financial markets have been buoyed by hope for progress on halting the trade war between the U.S. and China, as well as an agreed but not implemented pact for the U.K. to leave the European Union.