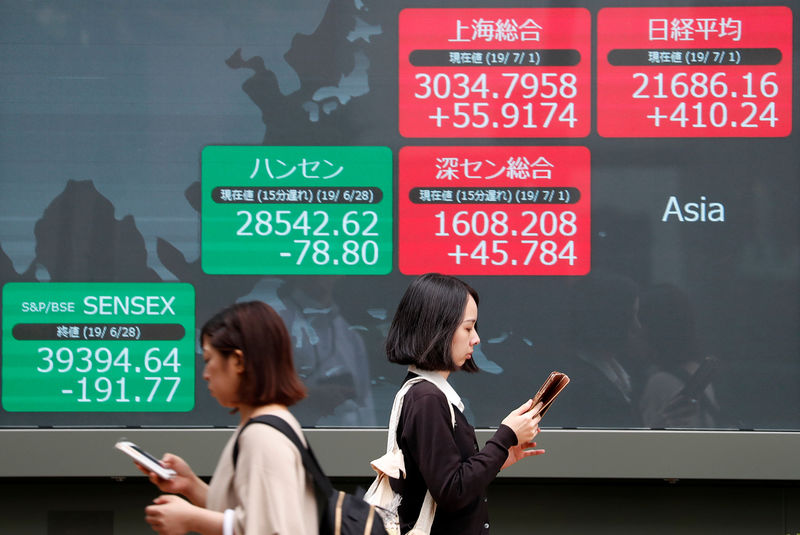 MSCI’s broadest index of Asia-Pacific shares outside Japan edged up a slight 0.04%, following a sharp 1.2% pullback on Monday.

Japan’s dithered either side of flat, while Shanghai blue chips eased 0.1%. E-Mini futures for the S&P 500 also dipped 0.1%, as did EUROSTOXX 50 futures.

Caution ruled ahead of a speech by U.S. President Donald Trump to the Economic Club of New York later in the day in case there was any new word on the Sino-U.S. Phase one trade deal.

Trump wrongfooted markets over the weekend when he said there had been incorrect reporting about U.S. willingness to lift tariffs on China.

On a more positive note, Politico reported Trump would announce this week that he is delaying a decision on whether to slap tariffs on imported European Union autos for another six months.

Investors were anxious about the situation in Hong Kong after a violent escalation of protests knocked nearly 2% off Asia-exposed banks HSBC and StanChart.

Riot police were deployed at metro stations across the territory and large queues were forming at railway platforms as commuters struggled to get to work.

A partial holiday in the United States closed the Treasury market on Monday and made for a quiet session on Wall Street. The ended up 0.04%, while the S&P 500 lost 0.20% and the Nasdaq 0.13%.

Treasuries were in demand when trading resumed in Asia, with yields on 10-year notes dropping to 1.918% and away from last week’s three-month top of 1.97%.

In currency markets, the main action was in sterling which hit a six-month high on the euro after the Brexit Party said it would not contest previously Conservative held seats in the UK election.

In a significant boost for Prime Minister Boris Johnson ahead of the Dec. 12 election, Brexit Party leader Nigel Farage said he did not want anti-Brexit parties to win, so was standing down candidates in seats won by the Conservatives in 2017.