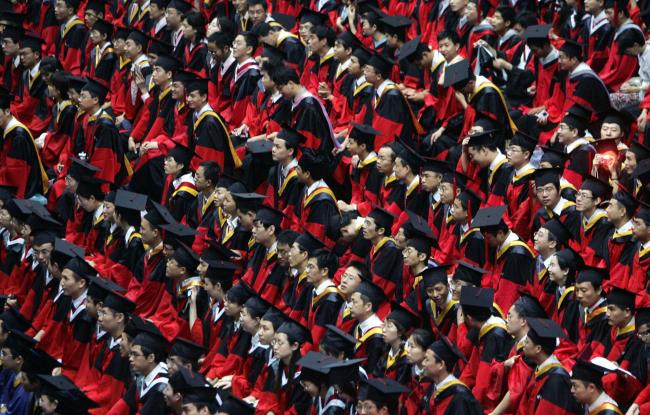 (Bloomberg Opinion) — A crown jewel of President Xi Jinping’s Made in China 2025 plan is faltering.

Tsinghua Unigroup Co. is the business arm of the prestigious Tsinghua University, Xi’s alma mater. The company has been trying to establish itself as a leader in China’s nascent memory-chip industry since 2015, when it famously tried to acquire stakes in U.S. rivals Micron Technology Inc (NASDAQ:). and Western Digital Corp (NASDAQ:). Both advances were rejected amid concerns that U.S. regulators wouldn’t approve the deals on national-security grounds.

Rebuffed abroad, Unigroup resolved to become a domestic champion and poured its resources into developing flash-memory technology. One of its subsidiaries, three-year-old Yangtze Memory Technologies Co., is already bringing its know-how to production. It’s impressive how fast the unit has developed despite lagging behind rivals in efficiency, Bernstein Research notes.

Yet credit investors are getting nervous: Unigroup’s dollar bond due in 2023 has tumbled in recent days, and is now yielding more than 10%. Last week, the chipmaker hurriedly arranged a conference call to reassure investors that its finances were in good order. Surely an asset of such national strategic importance shouldn’t be trading like a junk-rated firm bordering on bankruptcy, management reasoned.

A big question hanging over Unigroup is: Who’s its real daddy? As part of China’s university reform, which aims to separate academic institutions from business endeavors, Unigroup’s controlling shareholder Tsinghua Holdings Corp. has attempted to disentangle itself from the company multiple times. The latest rout comes amid a protracted custody battle.

Naturally, debtholders shudder every time speculation swirls about Unigroup’s ownership. Last year, its bonds tanked after Tsinghua agreed to sell its shares to an obscure state-owned entity in the second-tier city of Suzhou, only to recover a month later when the university opted for the cash-rich Shenzhen government instead. The bonds plummeted yet again in recent months when Tsinghua abandoned the Shenzhen deal. Then in a conference call last week, Zhao Weiguo, the holding company’s chairman, said Unigroup should remain under the Tsinghua University umbrella, making multiple references to the wishes of the “paramount leader.” For anyone in doubt, that’s Xi.

Figuring out who’s holding the purse strings is particularly important for Unigroup, because like all chipmakers it needs billions of dollars in capital outlays. Industry leader Samsung Electronics (KS:) Co., for example, splashed out about $25 billion annually in capital expenditure over the past five years. Yangtze Memory, Unigroup’s flash-memory business, has already spent more than 20 billion yuan ($2.86 billion) on a new plant in Wuhan and earmarked $30 billion in total spending there. The key difference is that, unlike Samsung, the Yangtze subsidiary is behind on technology and unlikely to break even until 2022 at the earliest, estimates Barclays (LON:) Plc. Money has to come from the outside. Sure, Unigroup is getting financial support from China’s various venture-capital-like guidance funds and has a big credit line from China Development Bank. But investors worry that’s not enough. Obscure state-owned entities, and even Tsinghua University itself, don’t have pockets deep enough to bankroll Unigroup as it ramps up production, they wager. Revenue at Unigroup rose 7.5% from a year earlier in the first half, but its Ebitda earnings tumbled 27% to a peanut-sized 1.5 billion yuan, driven by a sharp increase in research expenses. As of June, the company sat on 39 billion yuan of cash but had 58 billion yuan of interest-bearing debt due in the year ahead.

By now, conspiracy theories abound explaining Tsinghua’s decision to scrap its deal with Shenzhen, often considered China’s Silicon Valley. One explanation could be ego: Why would Xi allow his alma mater’s prized asset to be controlled by a mere local state-owned entity?

Investors also question whether geopolitics is at play. If Tsinghua offloaded its stake to Shenzhen, Unigroup would become a bona fide state owned enterprise, making it vulnerable to operations restrictions — from intellectual property transfer to preferential taxation — if China strikes a broader trade deal with the U.S. If Unigroup remains under the umbrella of a non-profit university, on the other hand, it could still develop its chip capacity within a gray zone.

The naive might argue that Beijing can’t possibly let Unigroup go under. That may well be the case; but as I’ve written, an unhealthy undercurrent is forming in China’s bond market. Increasingly, distressed companies are pushing for quiet deals with institutional investors to delay repayment dates. This is perhaps why investors got even more nervous when news surfaced that Unigroup had asked Credit Suisse (SIX:) Group AG for its help to amend and extend some bank loans.

Pinched by the trade war, China is now eager to become self-sufficient, and semiconductors are certainly a good place to start. Last year, China’s trade deficit in chips continued to widen to $228 billion, more than double levels from a decade earlier. But if you think Tsinghua Unigroup will emerge a clear winner from this, think again. As we’ve seen in the past, national service doesn’t necessarily get you a glittering credit score, with local government financing vehicles and regional banks alike now languishing with junk ratings. Unigroup investors would do well to remember that they can’t take Xi’s school spirit to the bank.