Home
Stocks
Gifts That Pay Off: These are the world’s best gifts to give, according to science
Prev Article Next Article 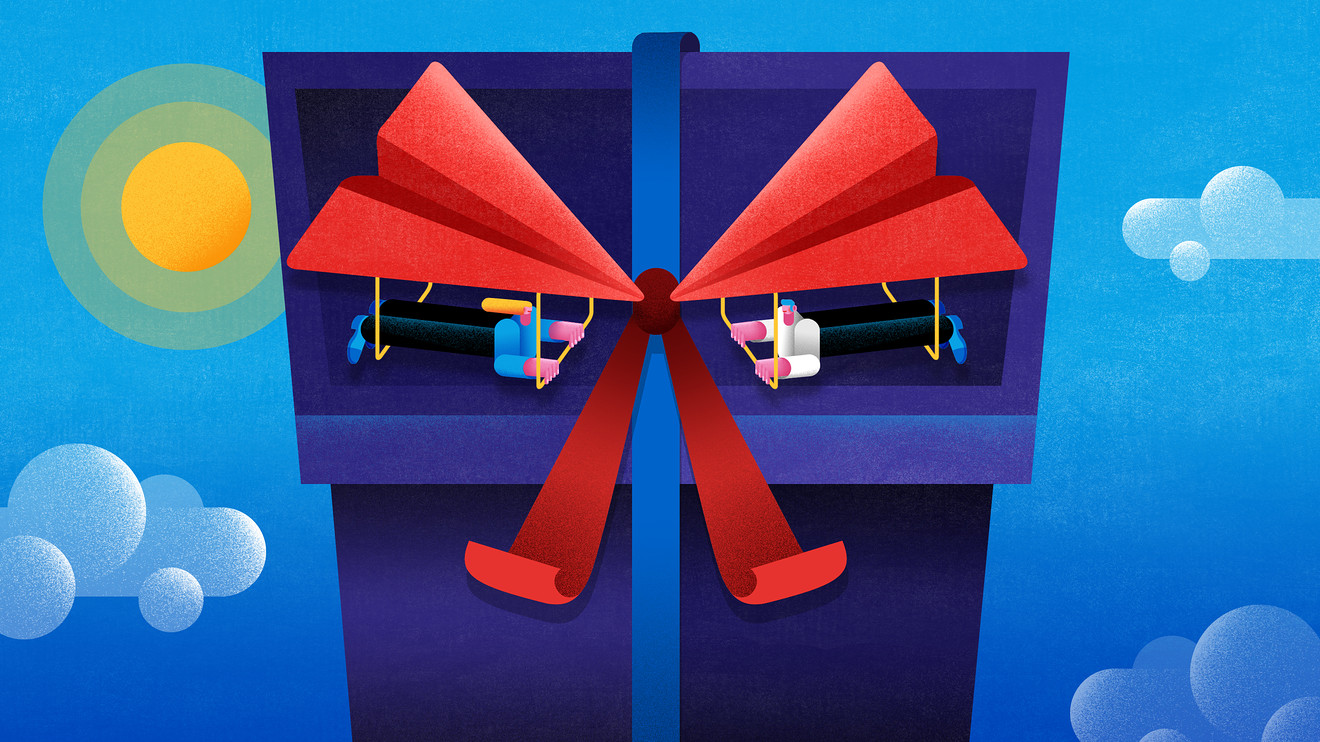 We’ve had thousands of years of practice, but humans still have a lot to learn about the art and science of gift giving.

In fact, we often fail at it, given the significant chunk of presents — $70 billion worth, by one count — that get returned after the holiday season. Nearly half — 46% — of consumers return one to three gifts over the holidays, according to research by Optoro, a returns management platform that retailers use.

With that in mind, MarketWatch brings you our latest Best New Ideas in Money series, Gifts That Pay Off. We won’t profile the latest hot gadgets to put on your holiday shopping list. Instead we’ll spotlight presents that can “pay off” in the sense that they could potentially help enrich recipients, literally and figuratively. For example, gifts that could go up in value, or boost someone’s career. We’ll also explore gifts that could pay off by improving someone’s well-being, productivity or happiness over the long run. When done right, gift giving can help us build better relationships and provide our loved ones with lasting happiness.

Our gift-giving fumbles can have real consequences: billions of wasted dollars, stress and anxiety experienced by both the giver and receiver, and, in the worst-case scenario, ruined relationships. Is it any wonder that December is one of the most popular times for romantic relationships to end?

Luckily, there’s a burgeoning field of research on the rights and wrongs of gift giving.

“People are spending billions of dollars in the wrong way,” said Julian Givi, an assistant professor of marketing at West Virginia University who has published several papers on gift giving. “It’s important to study gift giving because by pointing people in the right direction, we can help them improve their relationships with their friends and family.”

Here are some of the most common mistakes, and how to avoid them:

We focus too much on the ‘wow factor’

Gift givers are sometimes motivated by how they think a recipient will react in the moment they unwrap the present. So they seek out gifts that they know will probably elicit a delighted smile, multiple studies have concluded.

Meanwhile, we underestimate how much recipients value practical and useful gifts. Gifters should “think about what they want from the receivers — an instant smile and a happy squeal, or something of greater long-term value?” said Adelle Yang, an assistant professor at National University of Singapore and co-author of a study on “smile-seeking” in gift giving.

“People are spending billions of dollars in the wrong way.”

Elanor Williams, associate professor of marketing at Washington University in St. Louis, was inspired to study this phenomenon after one particularly disappointing gift exchange with her parents. She had given her mom and dad a gift wish list of mundane items she wanted, like a carrot peeler, non-slip yoga mat and electric tea kettle. They gave her a block of pink Himalayan sea salt from the high-end cooking store Sur La Table. The roughly $50 gift was on-trend and a surprise, but she returned it immediately and used the money to buy the tea kettle. She later co-authored a paper called “Why Certain Gifts Are Great to Give but Not to Get.”

“Recipients appreciate fun gifts but they also have a variety of needs and interests,” Williams said. “They also have lives and offices and kitchens and they need things like carrot peelers and flash drives.”

“Wow” gifts can often be expensive, but recipients can be just as satisfied by a cheaper, more mundane present. One possible solution to this common gift-giving error could be to combine a more practical gift with a “fun” one — say a kitchen blender with margarita mix, Williams and her fellow researchers have suggested Williams’s advice is to ask people what they want — a step she says people often forget — and then actually get them that item, another step people forget. If you’re at a loss when selecting a gift, go for something that can be consumed, like a bottle of wine or movie tickets, she said. That way there’s less of a chance the gift will end up crammed in a closet for eternity.

Be a sentimental Santa

People worry a sentimental gift will either be a smash hit or a total flop, and they assume a more “superficial” gift (a less-thoughtful present, but one that has attributes the recipient is known to like) will get a favorable, albeit lukewarm reception. So they take the safe route and go with the superficial gift, a 2017 study published in the Journal of Consumer Psychology found.

One of the examples in the study had gift givers choosing between giving a friend a large framed high-quality photo of their favorite musician, versus giving them a smaller, lower-quality framed snapshot of the two friends together on a day they had a lot of fun together. The two choices were equally priced. Though recipients generally preferred the more sentimental snapshot, most givers chose to give the superficial gift of the musician photo. In other words, “givers’ fears of getting it wrong prevents them from getting it right,” the researchers wrote.

Sentimental gifts that reference a shared memory or a personal story give us more lasting pleasure. And like the experiential gifts, they deepen our bond with the giver, professor Givi found in a study he’s currently working on.

There are economic benefits to better job gift giving, because we waste time and money when we shop for presents that end up returned or stuffed in a closet. But it’s the relationship-enhancing benefits of better gift giving that may be most important, Williams said. “When recipients feel well thought of, that’s a bonus of a good gift,” she said. “When it really matches what they’re looking for, it makes them feel seen in a way.”

We let our own desires guide us

Gift giving is supposed to be a chance for us to be selfless, but it doesn’t always work out that way. In fact, we sometimes intentionally give “bad gifts” out of self-interest, according to two studies carried out by Givi.

Someone who owns an older Apple AAPL, -0.09%  iPhone, for example, might not want to give their brother the newer model because it would make them feel less pleased with their own phone and be envious, Givi said. Likewise, we sometimes don’t like to give gifts that are identical to items we already own, because the gift giver may feel less unique, his research suggests.

We give material goods when we should give experiences

Several studies suggest experiences provide more lasting happiness than material possessions. But people give things as gifts in part because they don’t want to be empty-handed at a gift exchange, which can feel awkward, said Cassie Mogilner Holmes, an associate professor of marketing at UCLA’s Anderson School of Management. People also think of things as lasting longer than experiences. That’s not actually correct. “Experiences are far more emotionally engaging, and surprisingly, are more memorable,” Mogilner Holmes said. “Even though it’s not sitting on your shelf, we remember experiences. And we adapt more slowly to those memories so they continue to have the emotional effect, whereas things, we get used to.”

Giving friends and family experiences like tickets to a Broadway show instead of tangible items such as a wireless Sonos speaker also has the added benefit of deepening relationships. Recipients felt closer to givers after receiving experiences as presents, Cindy Chan, an assistant professor at the University of Toronto, found in a 2017 study. That’s likely because of the strong emotions we feel during experiences, versus how we feel about material objects, Chan said.

The world’s greatest gift may be time

Spending money — as little as $40 — to buy our way out of tasks we don’t like to do, such as cleaning, cooking or lawn maintenance, can also boost our happiness, a 2017 study of more than 6,000 people in four countries concluded. And that investment can literally buy us time to spend on an activity we truly enjoy, like reading a book, napping or strolling in the park.

One big tip about gifting experiences: take the recipient’s age into consideration.

Younger people tend to get more happiness from “extraordinary” experiences — think going to a Beyoncé concert or taking a hang gliding lesson — while older people often derive more happiness from calm and peaceful “ordinary” events like going out to lunch with a friend, being in nature, and simple “treats” like a yummy glass of wine, 2014 research by Mogilner Holmes suggested.

Some may take issue with characterizing certain preferences as being for “old” people, said Mogilner Holmes, because “sadly in our culture ‘old’ has a negative connotation.” She prefers to see her research as demonstrating the wisdom people gain through experience. “Older people tend to realize that their time is precious and therefore savor more,” Mogilner Holmes said. “A lot of my efforts are to help young people realize their time is precious so they become equally wise and savor more.”