It is no surprise to see stock markets sitting on the fence on Tuesday, as a 12 p.m. Eastern address by President Donald Trump to the Economic Club of New York looms.

Investors will be listening for clues regarding the progress of Sino-American trade talks, a topic that tends to get markets excited. Any move could be short-lived, but Federal Reserve Chairman Jerome Powell is speaking on Wednesday, so market nerves may be tested. Trump has been tweeting too:

Economy is BOOMING. Seems set to have yet another record day!

Don’t get too tangled up in headlines, advises Sherry Paul, private wealth adviser and senior portfolio manager at UBS Global Wealth Management, in our call of the day. She tells MarketWatch that her advice to clients these days is to be “politically aware, but invested in the data” when making portfolio decisions.

“What I mean by that is there’s a difference between what we refer to as policy driven and politically driven disruptions in a market that are caused by the fear of something happening,” such as on/off trade tariffs or whether the Fed will make a policy move, Paul said.

Those worries cause friction in the stock market and anxiety for investors, who may freeze and go to cash “typically at the wrong time, and then stress out about how they get back into the market,” she said.

Her list of advantages for investing in stocks? Earnings have been positive, companies are flush with cash, unemployment is at a 50-year low, wages are rising, the consumer looks to be in pretty good shape and the stock market is trading at 17 times earnings, as opposed to 27.2 times at the top of a market bubble that burst in 2001 and 2002, she says.

As for sectors, Paul likes consumer staples and consumer discretionary, the latter of which is more sensitive to the economic cycle as those companies produce things that aren’t essential for living. And “if you’re looking for an area of the market that’s been undervalued all year and that is coming out with earnings surprises, look at the health sector,” she said.

Bank of America Merrill Lynch provides this chart that highlights big themes for the next decade, and what ruled in the last: 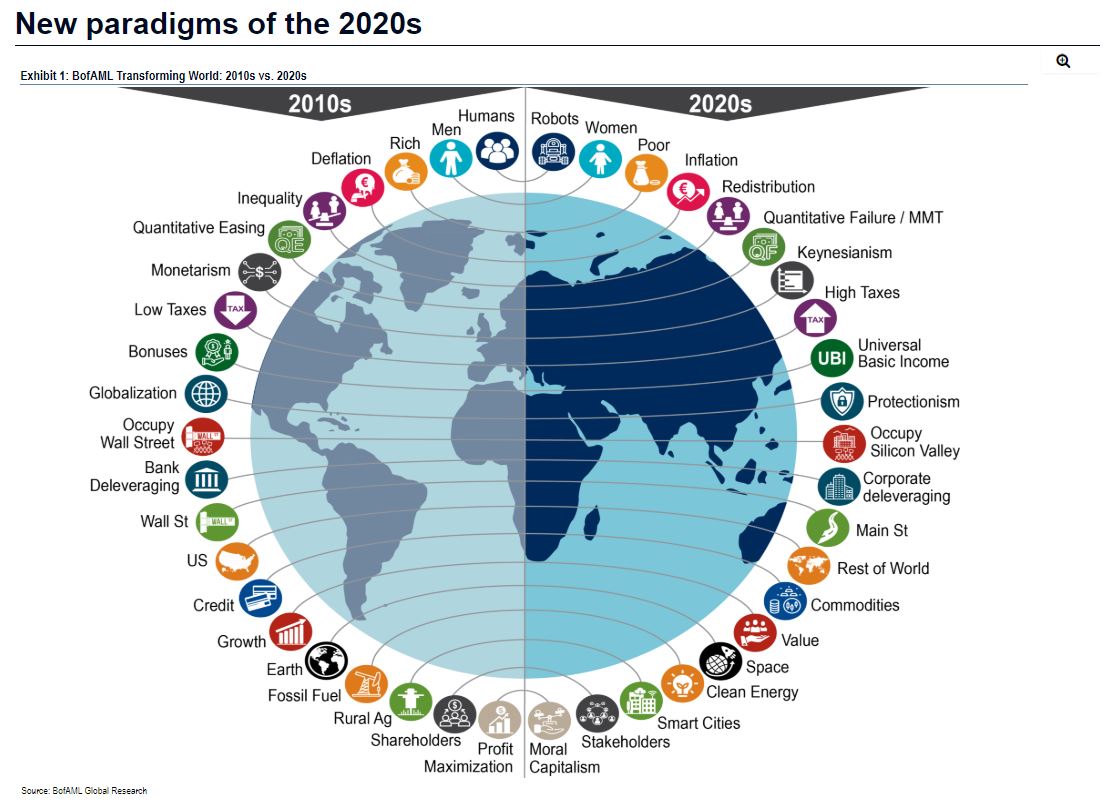 Read: Bank of America says “fear of missing out,” pushes fund managers from cash to stocks

This is how some people are gonna look a week into #DisneyPlus trying to binge watch everything pic.twitter.com/u2tqKFcG5t

Speaking of trade, Trump may delay a decision on European auto imports.

“But the idea that America is just waiting for a billionaire businessman to save the day by riding in on a white horse—or, actually, being driven over in a black limo—is just silly.”—That was New York Times columnist and Nobel Prize winner Paul Krugman on the debate about what billionaires contribute to society.

An Arctic blast will hit much of the U.S. this week, maybe breaking 300 records.

Former U.S. President Jimmy Carter had surgery to relieve pressure on his brain.

The U.S. Supreme Court will hear arguments over safeguards for immigrants who arrived as children.

Fires rage on in Australia, and it may be too late for some to evacuate.

Former White House spokesman Sean Spicer’s ‘Dancing with the Stars’ days are over.