Home
Stocks
Rex Nutting: Trump didn’t transform the economy — it’s mostly the same as it was under Obama
Prev Article Next Article 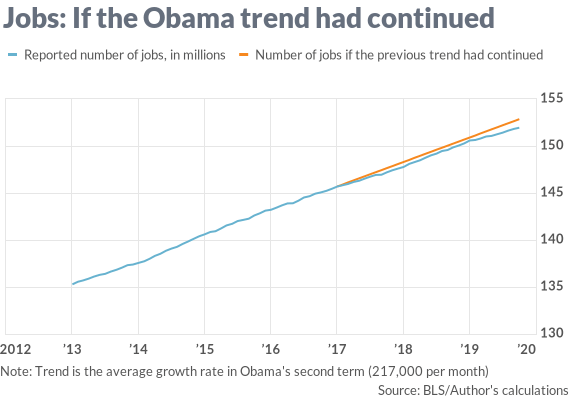 Job growth since January 2017 has been just a bit slower than it was in the previous four years.

President Trump has not transformed the U.S. economy for the better, as he promised he would. It has not “exceeded expectations,” as he claimed in a speech Tuesday in New York.

Over the past four years since he began his political career, Trump has promised much faster growth and much higher stock markets. He’s promised that all the manufacturing and mining jobs would come back, and he told us that the tax cuts would put more than $4,000 in the pocket of every working family. On Tuesday he said that America was back on its way to dominating the global economy, because his policies had made America competitive again.

None of that has happened.

There is no shame in keeping the economy on gradual, upward glide path. It’s nearly impossible for a president’s policies to radically improve the U.S. economy, but there are many ways for a president to mess it up.

And that’s really good news for Trump. There is no shame in keeping the economy on a gradual, upward glide path. It’s nearly impossible for a president’s policies to radically improve the U.S. economy, but there are many ways for a president to mess it up.

Despite Trump’s desperation to juice the economy with tax cuts, spending increases and interest-rate cuts from the Federal Reserve, there’s been only a modest and temporary uptick in the growth rate.

The potential growth rate of the economy, which he promised to transform with smart pro-business polices such tax cuts and deregulation, hasn’t budged an inch. 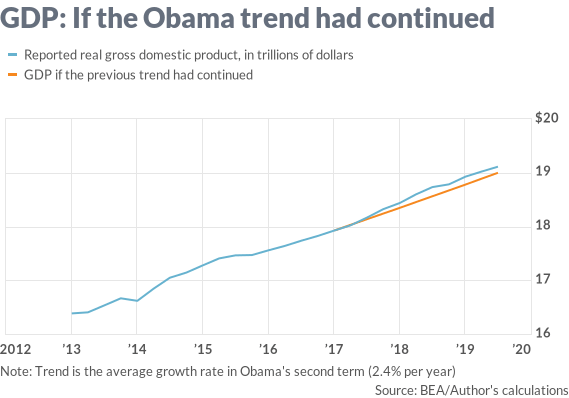 Boosted by fiscal stimulus, U.S. GDP has averaged 2.6% under Donald Trump vs. 2.4% in Barack Obama’s last four years in office.

Over the 11 quarters since he was elected, U.S. real GDP has averaged 2.6% per year, not the 4%, 5% or even 6% that Trump vowed. By way of comparison, GDP averaged 2.4% over the final 16 quarters of Barack Obama’s presidency. All of the extra growth (and more) since 2017 was provided by a fiscal boost from tax cuts and spending increases as Republican lawmakers turned from austerity budgets under Obama to stimulus under Trump.

In Obama’s final four years, government austerity subtracted an average of 0.5 percentage point from GDP each year, according to calculations by the Brookings Institution’s Hutchins Center.

Throw money at the economy

In other words, there’s nothing special about the acceleration in growth. It’s simply a matter of throwing a lot of money at the economy.

Trump managed to squeeze a little more growth out of the economy, but at the cost of hundreds of billions of dollars from the Treasury. That cost might be worth it if the tax cut had laid the groundwork for higher economic growth later due to large investments in private businesses and public works. It didn’t.

Job growth, which is probably the single most important indicator of the economy’s strength, has slipped slightly, from about 217,000 per month to 189,000. That’s still a respectable number, and there’s no reason for Trump’s economic advisers to lie and make up statistics to try to make it seem bigger.

Also read: How the Republicans moved the goal posts on GDP

Unfortunately for Trump, the Bureau of Labor Statistics is likely to revise that job growth down to around 175,000 as part of its annual benchmarking. That’s still a good number, one to be proud of. 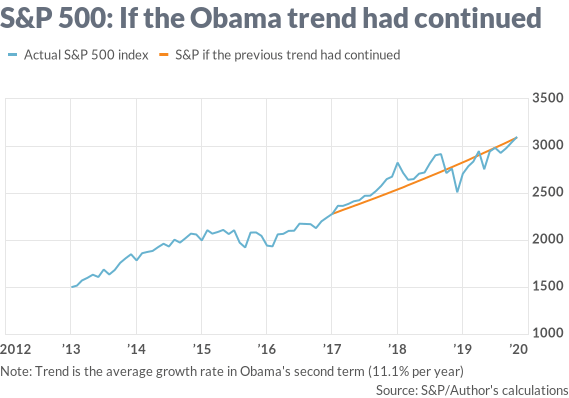 President Trump loves to brag about the stock market, but it hasn’t been any better than it was in the previous four years.

Trump has often boasted of the big gains in the stock market under his watch, but, as of midday, the S&P 500 Index SPX, +0.16%  had almost exactly matched the trend growth rate from 2013 to 2017. And Trump has put investors through an emotional ringer with his on-again, off-again trade negotiations and surprising tweets.

Meanwhile, the nagging, structural problems of America’s economy have not been addressed.

What he hasn’t fixed

His environmental, labor and immigration problems are a slow-rolling disaster that will reverberate in our economy for decades. His deregulation policies are heavy-handed and counter-productive. His corruption of American standards of ethical conduct could be long-lasting. The dogmatic judges he’s packed the courts with will be a negative for the economy and our democracy.

Trump hasn’t done anything to address inequality of opportunity, wealth or income. Nor has he done anything to promote growth and opportunity in left-behind regions, such as the abandoned factory towns of the Midwest, the South and the Great Plains. His idea of farm policy is to put every farmer on the dole.

Let’s give Trump the credit he deserves. He hasn’t made America’s economy any greater than it was before, and, by many real-time measures, it’s no worse. And 10 years into an economic expansion, that’s no small feat.

The festering problems in the economy, however, must be dealt with quickly by the next president and Congress, who will have a short window of opportunity to address climate change, inequality, and the lack of trust between the governed and the government.