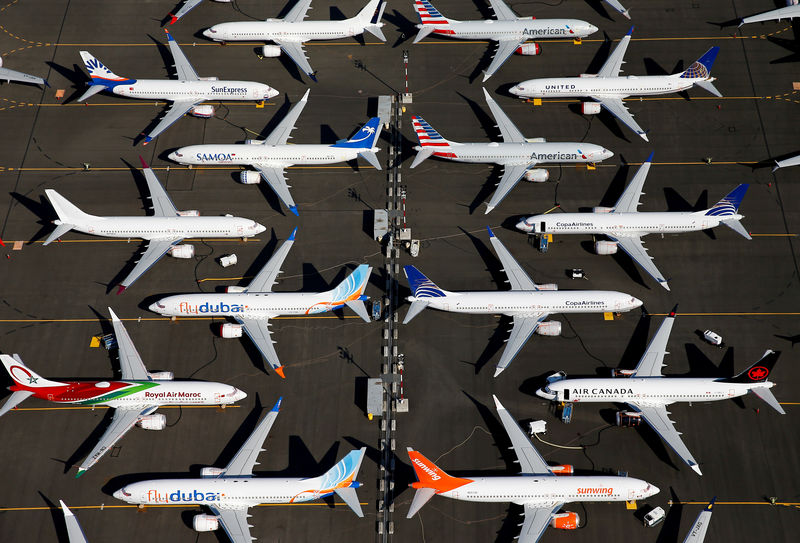 CHICAGO (Reuters) – Some U.S. airlines are willing to pick up their 737 MAX jets from Boeing Co (N:) as soon as December if the Federal Aviation Administration (FAA) approves delivery of the grounded planes before new pilot training is agreed, three people with knowledge of the matter said.

Hundreds of 737 MAX jets have rolled off Boeing’s Seattle production line in the months since two fatal crashes on the aircraft led to a global safety ban, forcing the planemaker to park un-flown jets at facilities across Washington state until regulators approve software and training updates.

Boeing on Monday said the FAA could issue an order approving the plane’s return to service in December, even though approval for training changes would take more time.

The FAA has repeatedly said that it has set no time frame for the process. FAA Administrator Steve Dickson said on Tuesday that a decision for the MAX “will be made solely on our assessment of the sufficiency of Boeing’s proposed software updates and pilot training.”

By starting to hand over 737 MAX jets, Boeing would get a head start on what airlines predict will be the biggest delivery logjam in civil aviation history, while also protecting output. The longer the 737 MAX grounding lasts, the longer it will take Boeing to work through deliveries and the higher the risk it will have to halt production of the money-spinning MAX.

The people with knowledge of the situation spoke on condition of anonymity due to continued uncertainty surrounding a definitive return-to-service date.

Southwest Airlines (N:), American Airlines Group Inc (O:) and United Airlines (O:), which had MAX aircraft in their fleets at the time of the March grounding and more on order, have had to repeatedly extend daily flight cancellations as they await regulatory approval.

The conditions for 737 MAX delivery or contract terms were not disclosed, raising questions on whether any movements would be more of a pre-positioning rather than an actual delivery. Aircraft deliveries entail extensive paperwork, lawyers, and crucially, payment.

One benefit is that aircraft do not depreciate until they start flying, so while an aircraft may be sitting, it still retains the same value until it begins to fly, one person said.

Some 737 MAX jets are in long-term storage with their engines sealed to prevent invasion from birds and wildlife, while others are receiving nearly daily checks that would enable a quicker return to flight. Either way, there is an expense.

Boeing has already set aside billions to compensate airlines for the cost of the grounding.

Still, Southwest, American and United have all said that they want their MAX orders as soon as possible.

“Not being at the front of the line may impact each airline’s delivery plans,” said Greg Bowen, committee chairman for training and standards at the Southwest Airlines Pilots Association.