Home
Stocks
The Tell: About 55% of wealthy investors are bracing for a ‘significant drop’ before the end of 2020, UBS survey shows
Prev Article Next Article

Even as the market ascends to new heights, wealthy investors are bracing for a turbulent period that could produce a “significant drop” in equity benchmarks in the near term.

That is according to a recent survey produced by UBS Wealth Management that finds that some 55% of deep-pocketed investors are preparing for a drop in the market before the end of the 2020. That is not to say that this cohort, consisting of 3,400 high-net-worth investors with at least $1 million in assets, doesn’t hold a mostly upbeat view of the economy and stock market over a longer period, the survey finds.

Against a backdrop where worries about a China-U. S. trade war and concerns about an economic slowdown dominate here and abroad, cash is expected to be king and will also rule a healthy portion of investors’ portfolios.

Indeed, wealthy investors hold 25% of their portfolios in cash, far higher than the roughly 5% that UBS recommends on average.

In fact, holdings of cash since the financial crisis have been particularly elevated, with the past two quarters reflected cash holdings that were three times the recommended average (see chart below). 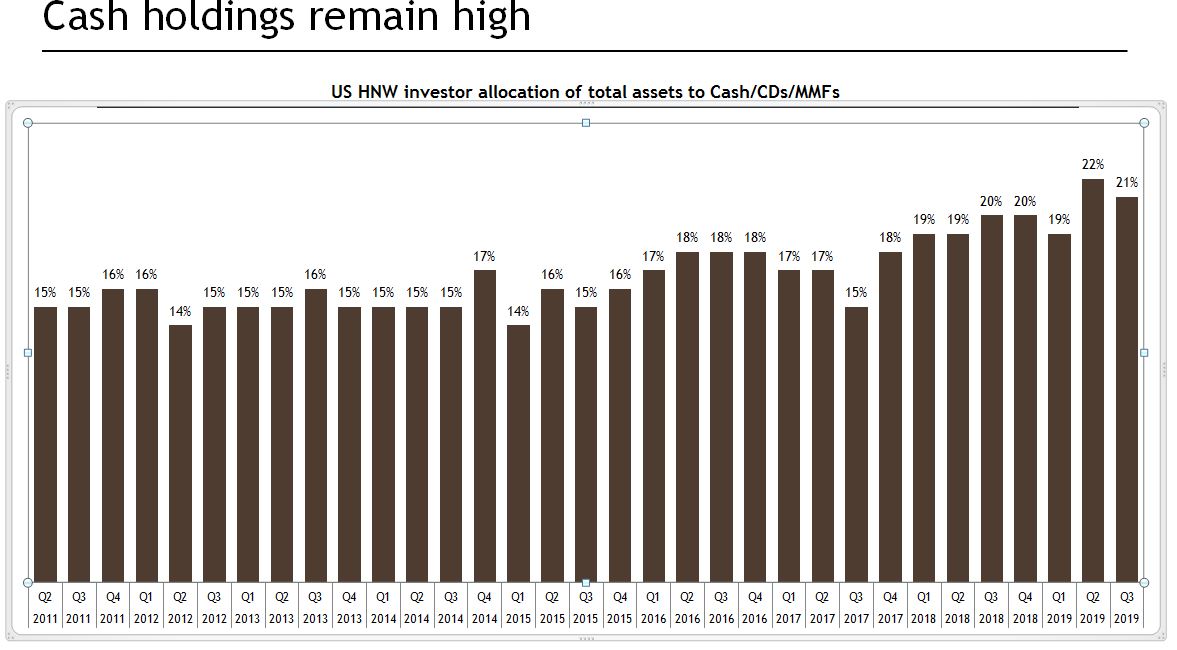 The report from UBS comes as the Wall Street Journal and Axios recently reported that corporations are also holding on to a large chunk of cash, partly so they can opportunistically invest in businesses and because C-suiters are worried that the trade fracas between Beijing and Washington may yet escalate.

The WSJ said assets in money-market funds have grown by $1 trillion over the last three years to their highest level in around a decade, citing Lipper data. Axios last week reported that firms are trying to protect themselves from a recession, noting that the recent pullback in spending by major companies could in fact help to cause a recession or exacerbate any downturn in the economy.

Having cash on hand as so-called dry powder is arguably a sensible notion. That is because the Dow Jones Industrial Average DJIA, +0.00%, the S&P 500 index SPX, +0.16% and the Nasdaq Composite Index COMP, +0.26% have all managed fresh records, even though corporate earnings and economic indicators remain weak.

On top of that, a Wall Street gauge of volatility, the Cboe Volatility Index VIX, +0.55%, is hovering well below its historic norm at around 19, suggesting that investors may be complacent about the possibilities of shocks to the market that could knock equity benchmarks decidedly lower.

All that said, as far as investors go, a separate UBS note from back in September cautions that stockpiling cash may not be the best strategy for investors. “But cash is an inefficient way of managing portfolio downside risk over the long term,” wrote UBS analysts including Mark Haefele. “Cash reduces the portfolio’s return during bull markets, while also providing very little ’crisis alpha’ during market drawdowns,” the strategists wrote.