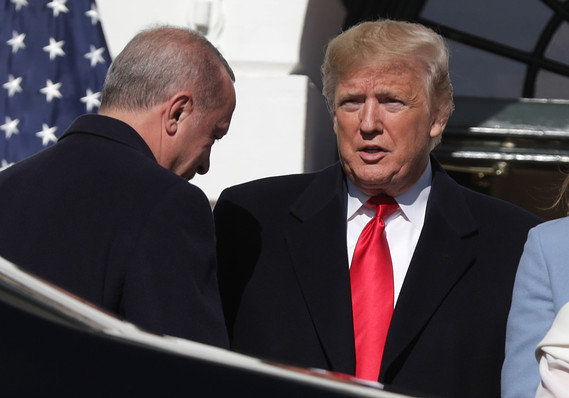 President Donald Trump greets Turkish President Recep Tayyip Erdogan upon his arrival at the South Portico of the White House on Wednesday.

President Donald Trump on Wednesday got an invitation to testify in the House’s impeachment proceedings, as a Democrat pushed back at a Republican who called for a whistleblower to appear:

‘I’d be glad to have the person who started it all come in and testify. President Trump is welcome to take a seat right there.’

Vermont Democrat Peter Welch said he’d be happy to have Trump appear before lawmakers at the impeachment hearings, saying the president had “started it all.”

Welch was responding to Ohio Republican Jim Jordan’s demand for testimony by the unnamed whistleblower whose complaint led Democrats to launch their inquiry.

Trump has claimed that the whistleblower’s understanding of a conversation between him and Ukraine’s leader was wrong. House Intelligence Committee Chairman Adam Schiff, who led Wednesday’s open hearings, has said testimony from the whistleblower is “redundant” because the committee has collected sufficient information.

Testifying to the panel, the acting U.S. ambassador to Ukraine, William Taylor, revealed a new call between Trump and Ambassador to the European Union Gordon Sondland about investigations Trump wanted Ukraine to pursue. (Ukraine is not an EU member state.)