Should retirees and soon-to-be-retirees invest in SRI and ESG mutual funds?

These acronyms, of course, refer to Socially Responsible Investing (SRI) and Environmental, Social and Corporate Governance (ESG). The investment approaches they represent have very much been in the news lately, especially in the wake of the Business Roundtable statement this summer that maximizing shareholder value can no longer be a company’s main purpose.

The ensuing debate over SRI and ESG investing is potentially an existential one for retirees and soon-to-be retirees, however. It would be particularly bad news if these approaches led to a diminution in returns, since most of us have underfunded retirements already and need to squeeze every drop of return out of our assets. Others, in contrast, argue that such approaches lead to superior returns. Still others believe that, since retirement is often viewed as a time of giving back, you might be willing to give up some returns to invest in causes in which you believe.

If this seems hopelessly confusing, welcome to the club.

Here’s the clarity I have been able to glean from the growing body of research into SRI/ESG investing.

Be careful not to compare apples to oranges

The first conclusion I draw is not to place too much importance on various performance comparisons involving ESG/ SRI funds. That’s because we do not have long-enough track records to support statistically significant conclusions. Even though we have two or three decades of returns for some of these funds, the intervening period has experienced several idiosyncratic developments that make it hard to extrapolate the past into the future.

For example, many ESG/SRI funds are overweight in technology companies. That provided a big boost to their returns during the go-go years of the 1990s, and a big drag on their returns after the internet bubble burst in the early 2000s. So any performance comparison that focuses on the 1990s will make such funds look artificially good, while any focus on the early 2000s will make them look unjustifiably bad.

Another sector that plays an outsize role in the performance of ESG/SRI funds is energy, since most such funds avoid the largest energy companies because of their reliance on fossil fuels. This has helped these funds in recent years, since the price of oil is today less than half where it stood in 2008. However, in the early 2000s, when oil’s price skyrocketed from a low below $20 a barrel to around $160, the average performance of ESG/SRI funds was hurt by avoiding oil companies.

Needless to say, there are lots of countervailing factors at work. The under- or overweighting of different sectors doesn’t always work in favor or against SRI/ESG funds. Consider the three major ESG indexes that index provider MSCI maintains for the U.S. market: The MSCI USA ESG Select Index SUSA, -0.26%, the MSCI USA ESG Leaders Index USSG, +0.11%, and the MSCI USA ESG Universal Index. All three indexes have beaten the S&P 500 SPX, -0.14%  over the last year, but lagged over the last five years (as you can see from the accompanying chart). 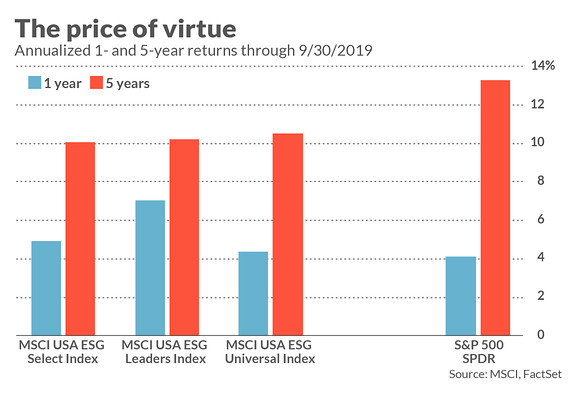 To summarize: We don’t have enough data to draw meaningful conclusions about the future, so be skeptical of claims that SRI/ESG funds have outperformed the market. It’s not that those claims are necessarily false, but extrapolating their outperformance into the future is problematic at best.

Above and beyond these statistical considerations, there is a theoretical argument for why it may be unrealistic to expect SRI/ESG funds to outperform the market over the long term: Lagging behind the market is an inevitable consequence of having any chance of changing the world.

This little-understood argument comes from Cliff Asness, the founder of AQR Capital Management. Asness argues that, in order to have any realistic hope of changing the world, ESG/SRI funds need to raise the cost of capital of companies deemed to be sinful. As you may remember from Finance 101, however, whenever a company’s cost capital goes up its stock’s expected return must go up too.

Asness concludes: “Frankly, it sucks that the virtuous have to accept a lower expected return to do good, and perhaps sucks even more that they have to accept the sinful getting a higher one. Well, embrace the suck as without it there is no effect on the world, no good deed done at all. Perhaps this necessary sacrifice is why it’s called ‘virtue’.”

Does this mean you should avoid ESG/SRI funds? Not at all. Asness, for example, is not an opponent of ESG investing, and insists that in fact he “believe[s] in its virtues.” He says he is making this argument to correct financial planners who have oversold the approach as a free lunch.

In any case, there are many believers in ESG/SRI investing who find it insulting that investors would only be interested in the approach so long as it leads to superior performance. That would in effect mean that they would be interested in doing the right or just thing only so long as they get paid for doing so.

The bottom line? By all means consider investing in SRI/ESG funds. Just do so with your eyes wide open.