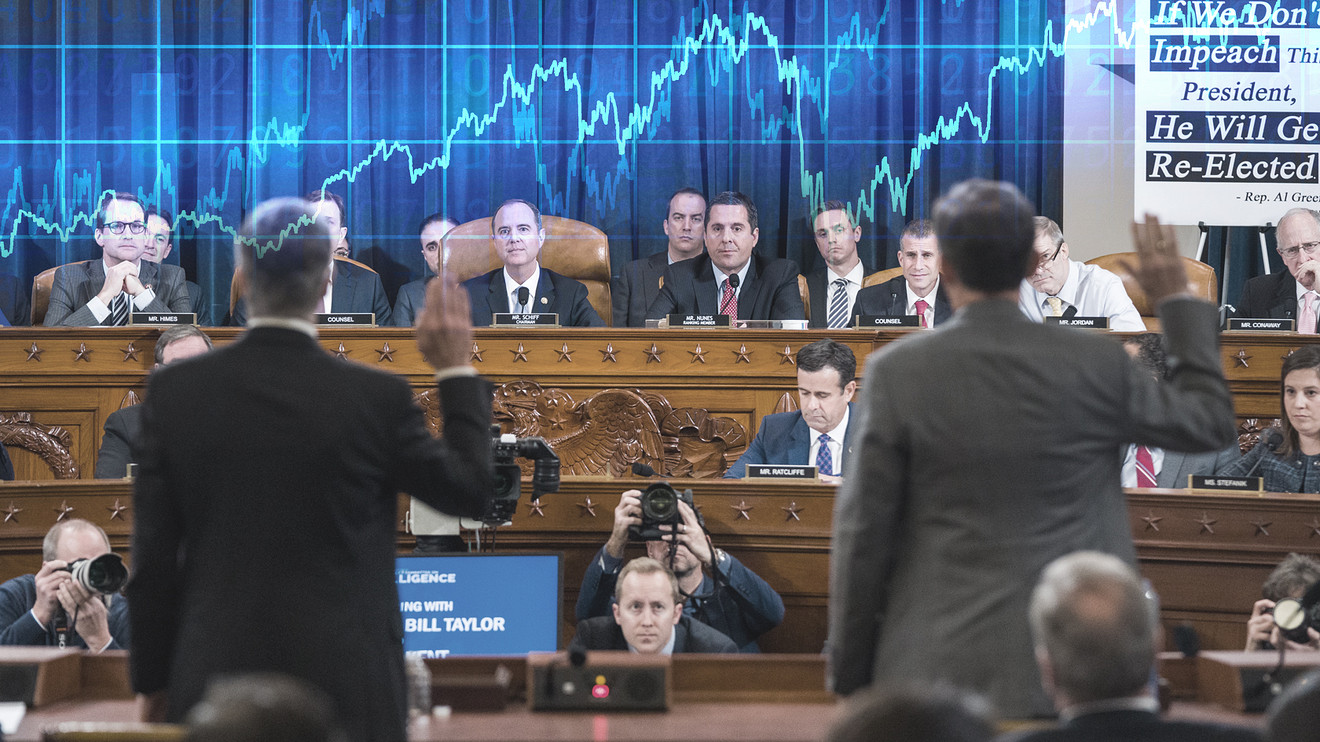 The first public impeachment hearings are under way as the House attempts to build a case that President Donald Trump acted inappropriately in his dealings with the president of Ukraine, but the stock market has been largely ignoring the dealings that could potentially see the 45th president impeached.

“For there to be any impact, there would have to be new information,” Brad McMillan, chief investment officer for Commonwealth Financial Network, told MarketWatch.

“At this point, enough information has leaked that markets are assuming impeachment, so there really isn’t much new that could happen to change that view. It’s already priced in,” he argued, referring to a House impeachment but not to a conviction of Trump in the Senate.

U.S. equity benchmarks are at or near all-time highs, with the Dow Jones Industrial Average DJIA, +0.35%, the Nasdaq Composite Index COMP, +0.00% and the S&P 500 index SPX, +0.11% having notched records over the past few sessions amid hopes for a détente between the U.S. and China on tariffs and some signs of progress toward a partial pact between the two largest economies.

Art Hogan, chief strategist at National Securities, told MarketWatch that politics aren’t even the main focus for markets because the trade clash has had the most influence on the global economy. “I think the market is more focused on the U.S.-China trade wars,” he said, noting, too, that historically markets have paid modest levels of attention to impeachment proceedings.

Indeed, MarketWatch columnist Mark Hulbert wrote back in September that impeachment hasn’t had a long-term impact on markets, and that is what investors tend to pay more attention to.

For example, stocks fell through the fall of 1998 as it became clear President Bill Clinton had lied under oath about a sexual relationship with Monica Lewinsky, then a 21-year-old White House employee, but then rallied as impeachment proceedings carried on in the House and then into a Senate trial, at which the president prevailed, Hulbert noted.

Back in 1973-74, stocks tanked as Watergate unfolded and bottomed as President Richard Nixon resigned.

Hogan said the important factor to account for is the relative state of the economy in those 20th-century instances of impeachment. It was vibrant during the Clinton years but weak as Nixon stepped down.

This time around, Hogan believes, he said, that the market is also focused on the economy’s health, in its historic 11th year of expansion and growing worries about slack elsewhere in the world, aggravated by the Sino-American tariff fracas.

Still, the National Securities strategist said that, while Trump’s business-friendly leanings and his focus on stock gains may have been good for Wall Street, those aren’t likely to go away even if Trump were to be impeached and removed from office.

“The pro-business policies that the Trump administration had put into place in 2018 probably don’t get affected necessarily by the impeachment process, even if the acquittal doesn’t happen in the Senate,” Hogan said.

Check out: Trump’s impeachment is more important to Washington than Wall Street

Indeed, if the House impeaches Trump, 67 votes would be needed in the Senate to remove Trump from the Oval Office, which appears unlikely at this point.

“I think the market looks at this as a difficult process to get through the Senate, where the math gets very difficult, so it is keeping this compartmentalized as noise and not news,” Hogan said.

Analysts at Nomura said they think the probability of Trump’s being forced out of office is “very low,” the strategists wrote in a research note dated Wednesday. “For that to change we would have to see a significant shift in public opinion, particularly among Republicans,” Nomura’s analysts wrote.

It is expected that the House will vote on articles of impeachment in the full House before the end of December. If one or more such articles ultimately pass in that chamber, a trial in the Senate is expected to follow in January, with Chief Justice John Roberts presiding.

For the market, however, more important drivers of its prospective success would be trade and interest-rate policy, overseen by Federal Reserve Chairman Jerome Powell, who is attempting to sustain the record run of economic growth or at least mitigate the effects of a slowdown.

That is why impeachment has been described as a sideshow by some market participants.

“In the market, perception is reality, and right now the market perceives this hearing to be a nonevent. So, barring some unforeseen damaging evidence, the hearing will likely not impact the market,” said Adam Sarhan, the founder of 50 Park Investments and a markets pundit.