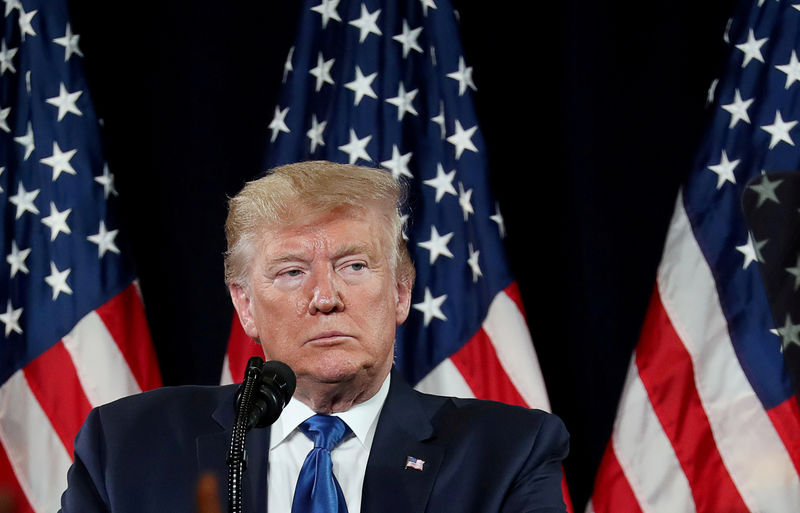 WASHINGTON (Reuters) – U.S. President Donald Trump’s threat to jack up U.S. tariffs on Chinese goods if the world’s two largest economies fail to reach a trade deal could raise the price of cellphones, laptops, and toys less than two weeks before Christmas.

Trump on Tuesday said a trade deal with China was “close,” but offered no details and warned that he would raise tariffs “substantially” on Chinese goods without a deal.

Stocks fell on Wednesday in Asia and Europe and initially in the United States as investors digested his comments. [L2N27S0OL]

Trump’s threat was a reference to previously announced 15% tariffs on about $156 billion worth of Chinese-made consumer goods scheduled to take effect on Dec. 15, according multiple trade experts and a source close to the White House. Known as the “4B” list of goods https://www.strtrade.com/assets/htmldocuments/USTR%20301%20List%204B.pdf, those tariffs would hit video game consoles, computer monitors, Christmas decorations and other items often given as gifts.

White House advisers said last week the Dec. 15 tariffs would likely be averted if a “phase one” trade deal was reached. Trump’s threat, and the markets’ reaction, illustrate how volatile the trade talks between the United States and China remains, and how important they are to the global economy.

The Trump administration hoped to avert the Dec. 15 tariffs, if possible, said William Reinsch, a former senior U.S. Commerce official and trade expert at the Center for Strategic and International Studies.

More so than previous tariffs, these would hit consumers particularly hard at a sensitive time, he said. “Trump does not want to do that right before Christmas. The optics would be terrible,” he said.

While most goods that Americans will buy before Christmas had been shipped long before, the imposition of the tariffs could trigger some “opportunistic price increases” on the part of retailers, he added.

Reinsch and other experts said they still expected Washington and Beijing to reach a “phase one” agreement before that point, but the timing was looking less certain.

“We’re in sort of a dangerous moment because both sides feel they have the upper hand, but I don’t think the talks have collapsed,” Reinsch said.

Trump could theoretically increase tariffs already imposed on $250 billion of Chinese goods, according to congressional aides, former U.S. officials, and trade experts. There is no indication the White House is considering that at this time.

Trump had agreed in October to skip raising those tariffs to 30% from the 25% rate in place now. That would affect goods ranging from industrial components and semiconductors to furniture and building supplies.

A 15% tariff on about $125 billion of goods that went into effect on Sept. 1, including flat-panel television sets, flash memory devices, smart speakers, Bluetooth headphones, bed linens, multifunction printers and many types of footwear, could also be increased, trade experts said.

People familiar with the discussions say that China has asked for these Sept. 1 tariffs to be removed completely.

Scott McCandless, principal at PwC, said he was still fairly optimistic about the two sides reaching a “phase one” deal, given the positive impact it would have on key constituencies such as farmers ahead of the 2020 presidential election.

More tariffs on consumer goods aren’t likely, he said. “Consumers have been a bright spot in the economy, so they will want to avoid any impact on that,” he said.