Home
Stocks
Upgrade: In this depressing — and all-too-common — scenario, you may need to sock away 44% of your income for retirement
Prev Article Next Article

The earlier you start saving for retirement, the less painful it’s going to be.

That’s one of the simple, but important, lessons illuminated in a new chart posted by data visualization site FlowingData.com — which revealed that many of us would need to save as little as 4% of our income, or as much as 44%, for retirement, depending on when you start saving and when you plan to retire. 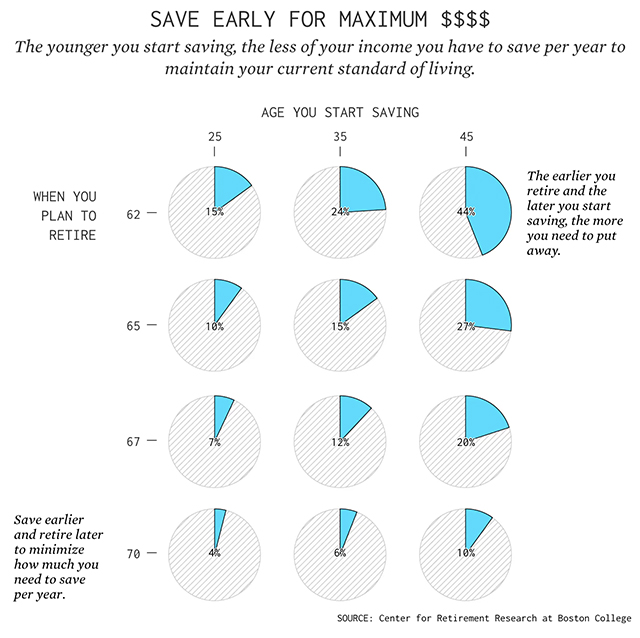 Other thought leaders think of the retirement savings calculations differently. Fidelity, for example, uses this guideline: “Aim to save at least 1x your salary by 30, 3x by 40, 6x by 50, 8x by 60, and 10x by 67,” it writes on its website. Others have thrown out numbers like $1 million (though MarketWatch points out that many of us will need far more than that) or calculations like 80% to 90% of your annual preretirement income and 12 times your preretirement salary.

Of course, exactly how much you need to save depends on factors such as the lifestyle you will want to live in retirement, where you plan to retire, how you invest and more.

But whatever you end up saving, one thing is clear: For many of us, it won’t be enough — at least if we want to maintain or improve our current standard of living.

“Currently, about half of working-age households are not saving enough to maintain their preretirement standard of living in retirement,” writes the Center for Retirement Research at Boston College in the report referenced by FlowingData.com.