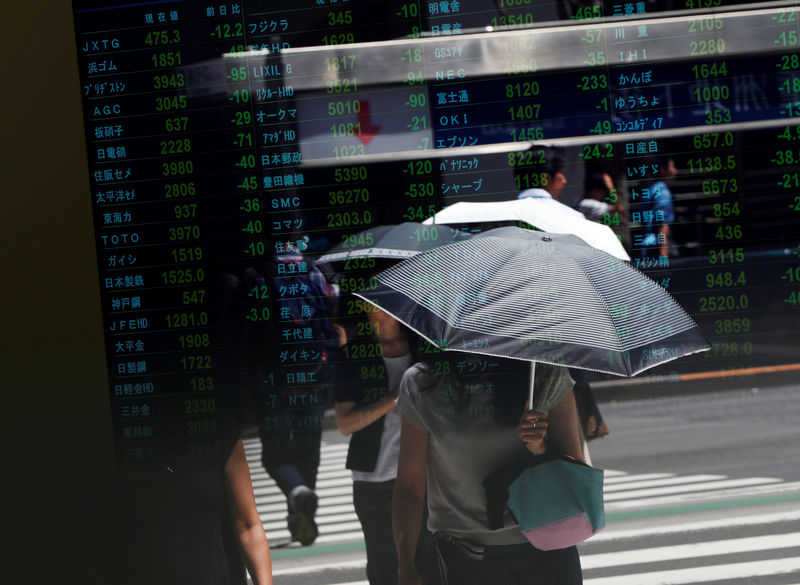 © Reuters. Passersby are reflected on a stock quotation board outside a brokerage in Tokyo

By Stanley White and Tom Westbrook

TOKYO/SINGAPORE (Reuters) – Asian stocks fell on Thursday after soft economic data in China and Japan showed the trade war between Beijing and Washington hitting growth in some of the world’s biggest economies.

European stock futures point to a flat open after recent rises. U.S. futures were down 0.1%, following a record-high close on the on Wednesday.

“The weakness in investment and production would suggest that confidence is down,” said Shane Oliver, chief economist at AMP Capital in Sydney.

The weak figures also come as market confidence toward a resolution weakens, with a new Reuters poll showing most economists do not expect Washington and Beijing to strike a permanent truce over the coming year.

Trump offered no update on the progress of negotiations in a policy speech on Tuesday. The Wall Street Journal reported on Wednesday that talks had snagged on farm purchases.

Meanwhile, the global fallout from the dispute is widening.

Data due at 0700 GMT will reveal whether Germany has entered a technical recession, as forecast.

Japan’s economic growth hit its slowest pace in a year in the third quarter as soft demand knocked exports.

“Looking around the region, you’ve had some near misses of recession – Korea’s been one, Singapore’s also been one and you’ve got Hong Kong in a recession at the moment,” said Sean Darby, global equity strategist at Jefferies in Hong Kong.

“So it’s not great. It’s not a cycle that is not leaving any scars,” he said.

Protesters paralyzed parts of Hong Kong for a fourth day on Thursday, forcing school closures and blocking highways and other transport links in a marked escalation of unrest in the financial hub.

Hong Kong’s fell 0.8% on Thursday to a fresh one-month low.

In currency markets, safe havens such as the Japanese yen and Swiss franc held on to gains.

The yen was quoted at 108.70 per dollar, close to a one-week high. The Swiss franc traded at 0.9900 versus the greenback, near the highest in more than a week.

The Australian dollar skidded to a one-month low on Thursday after a worryingly weak reading on employment re-ignited speculation about another cut in interest rates.