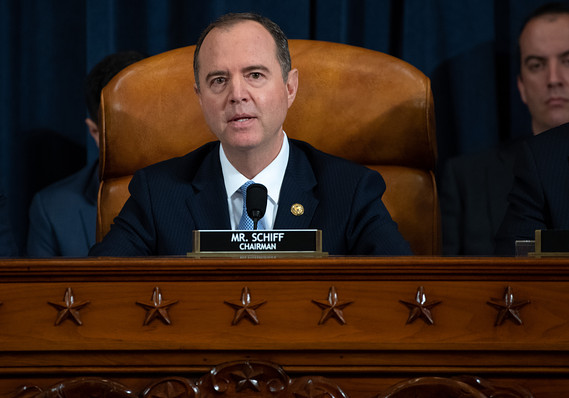 A flurry of witnesses will appear before the House Intelligence Committee, led by Chairman Adam Schiff, D-Calif., over the next week.

A flurry of witnesses are scheduled to testify over the coming week in the impeachment inquiry into President Donald Trump, as Democrats try to use the hearings to build their case in public.

On Friday, the House Intelligence Committee will hear from Marie Yovanovitch, the former U.S. ambassador to Ukraine who was ousted by Trump in the spring. Next week, eight additional witnesses are scheduled to testify in open session.

House Speaker Nancy Pelosi said Thursday that Democrats still haven’t made a decision about pursuing articles of impeachment against the president. But she said that testimony given Wednesday by two U.S. diplomats was evidence that Trump had committed bribery.

It’s unclear what, if any, new information will emerge from the hearings, which will feature White House official Alexander Vindman, former U.S. Special Envoy to Ukraine Kurt Volker and others.

“What we learn next may depend on how [House Intelligence Committee] Chairman [Adam] Schiff and the Democrats ultimately decide to frame the offense they want to find impeachable,” said Adam White, a legal scholar at the American Enterprise Institute. “What Democrats need to show is that President Trump leveraged U.S. policy specifically and intentionally to hurt his political rival, [former Vice President Joe] Biden,” said White in an email to MarketWatch.

Democrats say that Trump used his power to withhold aid to Ukraine in exchange for an investigation into Biden and his son Hunter. Trump says he’s done nothing wrong, and Republicans argue the president didn’t pressure Ukraine’s leader.

In Wednesday’s open hearing, acting U.S. ambassador to Ukraine William Taylor described a call between Trump and his ambassador to the European Union discussing a need for Ukrainian officials to pursue “investigations.” The Associated Press reported Thursday that a second U.S. embassy staffer overheard the call.

U.S. markets have largely ignored the impeachment drama in Washington, with equity benchmarks at or near all-time highs. The Dow Jones Industrial Average DJIA, -0.01%, Nasdaq Composite Index COMP, -0.04%   and S&P 500 index SPX, +0.08%   have notched records over the past few sessions.

Read: The stock market heads to record heights even as the Trump impeachment hearings enter a new phase — here’s why.