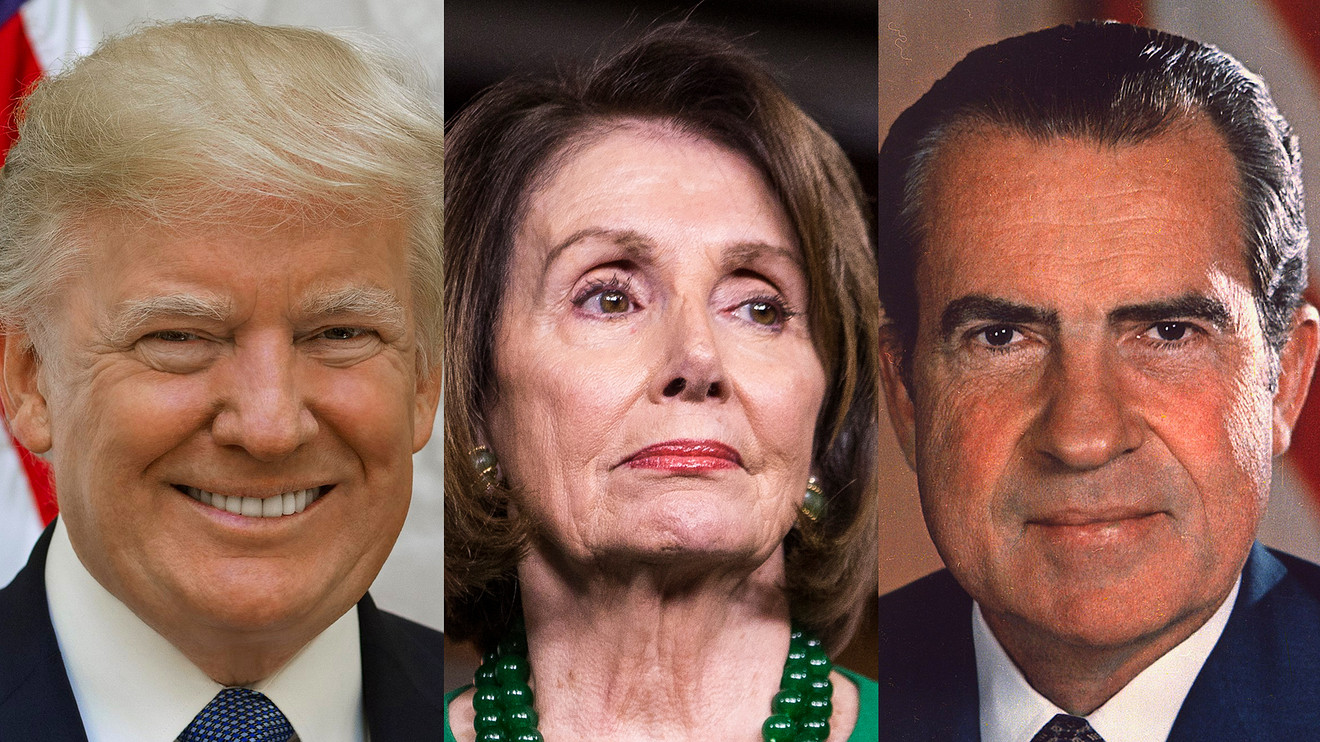 House Speaker Nancy Pelosi blasted President Donald Trump after the chamber’s first public impeachment hearings, comparing him unfavorably to former President Richard Nixon, who resigned in 1974 before the House could vote to impeach him.

Pelosi delivered this zinger Thursday at her weekly news conference:

‘What President Trump has done on the record in terms of acting to advantage a foreign power to help him in his own election and the obstruction of information about that, the cover up, makes what Nixon did look almost small — almost small.’

When a reporter asked her to clarify what counted as bribery in the impeachment inquiry focused on the Trump team’s dealings with Ukraine officials, the California Democrat said: “The bribe is to grant or withhold military assistance in return for a public statement of a fake investigation into the elections. That’s bribery.”

In addition, Pelosi said “all roads lead to Putin” with Trump. Russian President Vladimir Putin benefited from the delayed American assistance to Ukraine, as well as from Trump’s decision to pull back U.S. troops from northern Syria and from the president expressing doubts about NATO, she said. “The list goes on. I won’t even go into the elections.”

The House speaker pushed back against another reporter who asked why the whistleblower in the Ukraine case is being protected. “Any retribution or harm coming to a whistleblower undermines our ability to hear truth about power, so I will defend the rights of the whistleblower vehemently,” said Pelosi, as she referred to that reporter as “Mr. Republican Talking Points.”

Trump, for his part, was showing that he was thinking Thursday about the impeachment inquiry as he tweeted about a Wall Street Journal op-ed that said Pelosi had it right initially this year when she tried to avoid going down the impeachment path.

Among the reaction from investors to Wednesday’s testimony, Cumberland Advisors co-founder David Kotok told Politico that so far it’s “not a Nixon type story.”

“The markets SPX, -0.06%  see the impeachment process as a pure political ploy. So the metaphor is [Former President Bill] Clinton, not Nixon,” Kotok said. “If evidence surfaces to a smoking gun level like the Nixon 18½-minute gap in a tape, then things change.”

Related: The stock market heads to record heights even as the Trump impeachment hearings enter a new phase — here’s why

And see: The Trump impeachment inquiry could be good news for one major industry