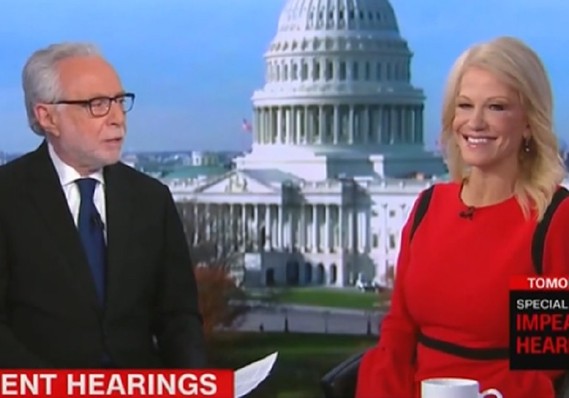 Wolf Blitzer, during a contentious interview on CNN Thursday, told White House counselor and tireless Trump shield Kellyanne Conway that he didn’t want to talk about her marriage to George Conway, a persistent critic of the president.

But he just couldn’t help himself, and he triggered a double-take from Conway when he let slip that he knows there are “issues” there.

“Did you just say there are issues there?” she fired back as he backpedaled, saying he wants to talk about the substance. The interview’s fate was sealed, however.

‘I think you embarrassed yourself and I’m embarrassed for you because this is CNN now? I looked up to you when I was in college and law school, I would turn on CNN to see what Wolf Blitzer had to say about war, famine, disruption abroad. I really respected you for all those years as someone that would give you the news and now it’s what somebody’s husband says.’

Blitzer tried to smooth things over, but Conway wasn’t about to play nice.

“You think somehow that that will help your ratings or that you’re really sticking it to Kellyanne Conway,” she said. “Where is the shame, where is the introspection.”

The interview had started off on tense footing well before the two tangled over her marriage. Conway was on the show to talk about the impeachment hearing, shrugging it off as a non-event and a waste of time.

But here’s where it really started to go sideways:

Wolf Blitzer to Kellyanne Conway: “I don’t want to talk about your marriage, I know there are issues there.” pic.twitter.com/ERvWX0L9eE

And she left with one last jab:

Kellyanne Conway melted down after Wolf Blitzer asked her to respond to something her husband said on MSNBC. #triggered pic.twitter.com/deESAcuHPB

What about those “gossip girls” of Twitter? They couldn’t look away, of course:

Watching Wolf Blitzer interview KellyAnne Conway in my hotel room and wondering if the hotel will simply add the cost of the smashed TV to my bill.

Answer: This interview between Wolf Blitzer and Kellyann Conway. Question: What is a train wreck Alex? #TrumpImpeachment #CNN pic.twitter.com/XqLotTJArw