Home
Stocks
The Tell: How the Chinese yuan’s growing global influence is shaking up the currency market
Prev Article Next Article

The Chinese yuan is turning into kind of a big deal.

Société Générale currency analyst Olivier Korber, in a Thursday note, observed that among the five largest U.S. trade partners, only the weight of China and Mexico have increased in the trade-weighted measure of the U.S. dollar since 2006, while shares for both the eurozone and Japan have dropped (see chart below).

And based on the currency weights used by the Federal Reserve in its trade-weighted dollar index, China has even overtaken Canada to make the yuan the second-most traded currency by the U.S., just after the euro, he noted. 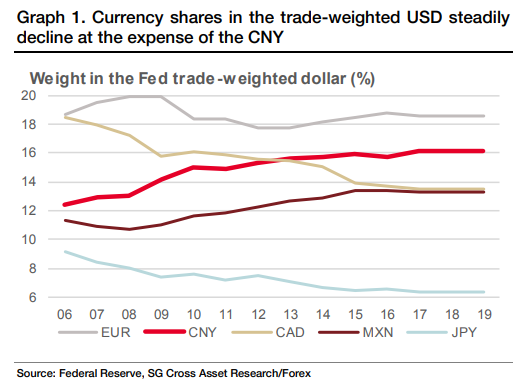 “The emergence of the yuan in trade-weighted currency baskets is redefining the relative importance of the main FX drivers,” Korber said. “China is reshuffling the cards by gradually promoting the yuan as a global currency.”

Yuan trading on China’s mainland is tightly controlled, with its level closely guided by the People’s Bank of China, or PBOC. The currency also changes hands in a an offshore market in Hong Kong and other financial centers. It’s weakened versus the U.S. dollar over the course of the U.S.-China trade battle, a move that’s reflected both the relative underperformance of China’s economy and what many economists see as an effort by Beijing to partly offset the impact of tariff increases on Chinese goods.

The yuan USDCNY, -0.0399%  traded at more than 7 to the dollar in August — a level Beijing had previously defended — adding to rising trade tensions at the time and breaching what many had termed a “line in the sand.” The yuan subsequently regained some strength, briefly changing hands at less than 7 to the dollar earlier this month. It traded at 7.0208 yuan per dollar in onshore trade on Thursday.

So how is that influence being felt? Korber said the PBOC’s “unpredictability” has turned the yuan into an “almost exogenous factor for market sources by creating a challenging source of uncertainty,” he said. Meanwhile, the long-running U.S.-China trade tensions are shifting the currency market’s “historical dollar-versus-euro polarization” toward a dollar-versus-yuan orientation.

Meanwhile, market participants have to deal with the new reality, Korber said. 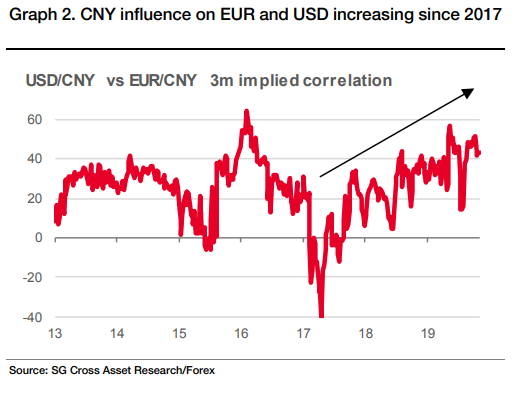 It explains why there has been a sharp uptrend in the implied correlation (see chart above) between the U.S. dollar/Chinese yuan pair and the euro/yuan EURCNY, +0.1333%  pair, reflecting how the yuan increasingly influences the euro and the dollar, he said, noting that the correlation is near the level seen in late 2016, when it topped 60% at the peak of the yuan’s massive 2014-16 depreciation.