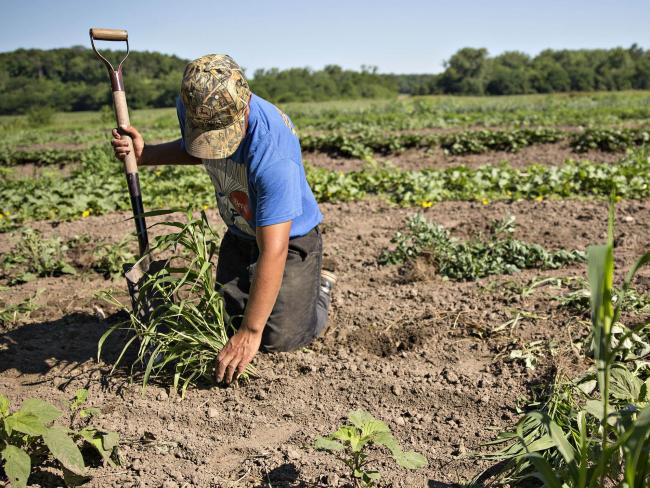 Farm finances deteriorated across a swath of agricultural states during the summer and early fall despite the Trump administration’s second round of trade aid payments and slightly higher prices, the Federal Reserve Bank of Kansas City reported Thursday.

The report underscores the mounting economic pressure on a key Donald Trump constituency as he confronts a re-election campaign and impeachment struggle while undertaking negotiations with Beijing on a partial trade deal that could provide relief from retaliatory tariffs hitting American farmers. The trade talks have bogged down as Trump seeks assurances that Beijing will deliver on commitments on agricultural purchases.

Farm income fell in the third quarter from a year ago in each of the seven rural states covered by the Kansas City Fed, according to its survey of agricultural credit conditions. The report cited the trade war, volatile crop prices and disruptions at a major beef processing facility.

Bankers contacted by the Fed said the drop in farm income was sharper than they expected going into the summer. Respondents expect income to decline further and credit conditions to worsen in the coming months despite trade aid payments. The USDA started issuing payments from its 2019 trade aid program in August.

“Extreme weather conditions and commodity prices continue to adversely effect the financial condition of our producers,” said one banker quoted in the report, identified only as located in Central Nebraska. “These conditions are potentially setting up a difficult renewal season this fall” for loans.

Farmers have responded by cutting back on spending and equipment purchases to preserve cash. Even so, their working capital deteriorated “at a modest pace,” according to the Fed.

The Federal Reserve Bank of Chicago, which covers five Midwestern states, also reported Thursday that farm credit conditions “slid yet again” in the third quarter. Bankers participating in the Chicago Fed regional survey also said they expected crop net cash earnings to drop in the fall and winter from levels a year earlier.

Other indicators also show rising financial stress. U.S. farm bankruptcies in the 12 months through September rose 24% from the same year-ago period to the highest since 2011, according to a report by the American Farm Bureau Federation. That report also highlighted farmers’ and ranchers’ growing dependence on government financial help.

Almost 40% of projected farm profit this year will come from trade aid, disaster assistance, federal subsidies and insurance payments, according to the report, which is based on Department of Agriculture forecasts. That’s $33 billion of a projected $88 billion in net income.