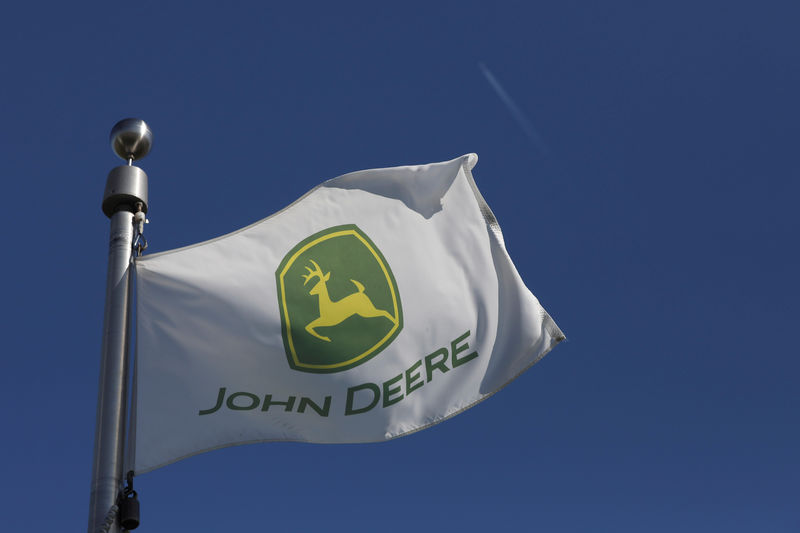 EAST MOLINE, Illinois (Reuters) – Devin Spencer has been on edge ever since Deere & Co. laid off dozens of his colleagues at its Harvester Works plant in western Illinois due to dwindling demand for farm combines.

He considers himself lucky to have escaped the indefinite layoffs, but has been relegated to a lower-level job with a pay cut. The 29-year-old welder blames America’s trade war with China, which has dented U.S. agricultural exports and, in turn, slowed sales of equipment, for his situation.

Spencer, who is married with a young son, fears the worst if sales continue to sag and Deere cuts more workers. He is not alone. Hundreds of workers at Harvester Works are facing an uncertain future as a result of the 16-month-old tariff war.

“Orders have sunk so low that I am lucky to have a job,” he said. “What happens if we don’t get orders? I am out of the door.”

Deere, the world’s largest tractor maker, said last month it had indefinitely laid off 50 employees at Harvester Works, part of 163 layoffs across Iowa and Illinois, adding that each factory balanced the size of its workforce with demand for its products.

Harvester Works’ union head David Thompson told Reuters that weeks later the company extended temporary layoffs for another 100 workers at Harvester Works until early January. The workers were due to return to work in November, he said.

Another 300 employees have been downgraded to lower-level roles, Thompson added.

Deere has not publicly disclosed the extension of the temporary layoffs or the relegation of workers. The company declined to comment for this story, citing a quiet period before quarterly earnings on Nov. 27.

All the layoffs and job shuffles, which Thompson says have affected about 41% of the plant’s roughly 1,100 workforce, show how the trade war is hitting the operations of some manufacturers like Deere, regarded as a bellwether for U.S. agriculture and manufacturing.

President Donald Trump’s trade war, coupled with poor weather in the U.S. farm belt, has dented the company’s earnings and forced it to cut production, as well as trim full-year profit and sales forecasts.

Retail sales of Deere’s combines in North America have been falling since May, according to the company which reports figures on a three-month rolling basis. Its rivals are also battling lower sales.

Trump blames China for hollowing out U.S. manufacturing, and says his tariffs are needed to force a change in the way Beijing does business.

He says his measures will ultimately benefit U.S. companies and workers by not only opening up the Chinese market, but also bringing manufacturing jobs back to the United States.

Thompson, who did not vote for Trump, a Republican, agreed some measures were required, but said workers at his facility were bearing the brunt of the fallout.

The mood was different in early 2018. A nascent recovery in demand had led to healthy growth in orders for Deere’s planters and combines. Harvester Works began hiring new workers, said Thompson.

But as the trade war began taking a toll on the farm economy, Spencer said farmers started cancelling their orders.

“We could all see the writing on the wall,” he said.

Deere is not alone. Rival Caterpillar (NYSE:), the world’s largest heavy equipment maker, has decided to let go of 120 workers in Texas, for example, while United States Steel Corp has had layoffs in Michigan.

U.S. Federal Reserve reports show American factories are running way below their long-run average production levels and companies are delaying capital spending due to uncertainty over trade policy. U.S. manufacturing activity fell to a more than decade-low in September.

Trump, however, said on Tuesday that industries had not been hurt by his administration’s trade actions.

Harvester Works is in Illinois, a heavily Democratic state. But some industrial swing states like Pennsylvania, Wisconsin and Michigan that Trump narrowly won in 2016 are now shedding thousands of factory jobs.

Deere’s shares have gained about 2% since Trump announced a “phase one” trade agreement with Beijing on hopes that more agricultural sales to China would encourage farmers to resume purchases. The deal, however, is still being put to paper.

Thompson worries the agreement will not be enough to help lift demand for his factory’s combines.

Meanwhile Spencer, the welder, is now sweeping the floor of the plant.

Apart from the psychological impact of doing a less skilled job, the change has reduced his earnings by more than a third. Spencer says he can no longer afford a vacation.

When Trump first declared a war on the global trade order last year, he said: “Trade wars are good and easy to win.”

However, employees at Harvester Works have yet to see any positives, according to Josh Saunders, who has been moved from a higher-paying welding role to an assembly job.

The 37-year-old, who has a wife and two stepsons, is worried losing a job with one of the better employers in the area could force him to sell his house and move away.

“I don’t know where this winning is coming from because we are having layoffs, and orders aren’t there,” he said.