Home
Stocks
Key Words: Yovanovitch pushes back against Trump in real time: ‘I … made things better’
Prev Article Next Article 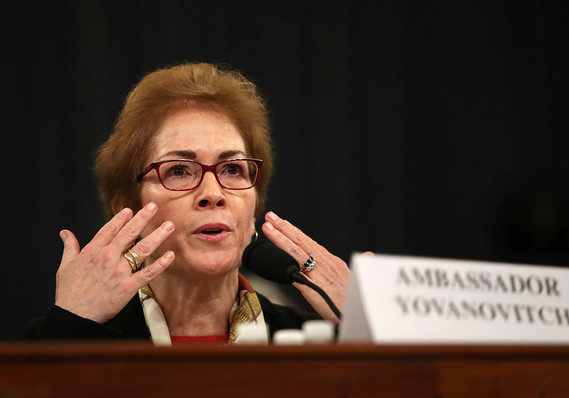 The ousted U.S. ambassador to Ukraine on Friday rebutted a critical tweet about her from President Donald Trump during the second day of open impeachment hearings, as she testified such attacks are “intimidating.”

‘I actually think that where I’ve served over the years, I and others have demonstrably made things better, both for the U.S. and the countries I’ve served.’

Marie Yovanovitch began the second day of open hearings by declaring that her abrupt removal by the Trump administration played into the hands of “shady interests the world over,” with dangerous intentions towards the U.S.

Everywhere Marie Yovanovitch went turned bad. She started off in Somalia, how did that go? Then fast forward to Ukraine, where the new Ukrainian President spoke unfavorably about her in my second phone call with him. It is a U.S. President’s absolute right to appoint ambassadors.

With Yovanovitch sitting at the witness table, House Intelligence Committee Chairman Adam Schiff asked her to respond. “I don’t think I have such powers, not in Mogadishu, Somalia,” she replied.

The congressman also asked about the effect of Trump’s attacks, prompting Yovanovitch to reply, “I can’t speak to what the president is trying to do, but I think the effect is intimidating.”

Schiff then said, “some of us here take witness intimidation very, very seriously.”

Democrats’ impeachment probe focuses on a phone conversation between Trump and Ukrainian President Volodymyr Zelensky, in which Trump asked his counterpart to “look into” former Vice President Joe Biden and his son Hunter. Trump says he did nothing wrong and calls the impeachment inquiry a “witch hunt.”

U.S. stocks SPX, +0.61%, meanwhile, were trading at fresh records as the hearings went on.

See: The stock market heads to record heights even as the Trump impeachment hearings enter a new phase — here’s why.