Home
Stocks
Mark Hulbert: The odds don’t favor KKR if it does a leveraged buyout of Walgreens
Prev Article Next Article

Walgreens Boots Alliance is unlikely to perform any better as a private company than as a public one.

That’s important information, because Walgreens WBA, +0.00%  stock has jumped in recent days on rumors that the buyout firm KKRis interested in taking the drugstore chain private. If the deal were to go through, it would be the largest leveraged buyout ever.

This outperformance is an illusion, however, according to Nicolas Rabener, founder of London-based FactorResearch. In an interview, he pointed out that, because the average private equity fund is more leveraged than the average public equity fund, you’d expect it to outperform during bullish periods. Yet that is not genuine outperformance, but instead a reflection of its greater risk.

To illustrate, Rabener reported on a hypothetical portfolio he constructed out of the publicly traded U.S. stocks that are similar to those that have been the target of private equity. These stocks tend to have smaller market caps than the overall market, lower valuation multiples, and higher leverage. Rabener found that his hypothetical portfolio over the last 30 years outperformed an index of U.S. private equity funds — as you can see from the accompanying chart. 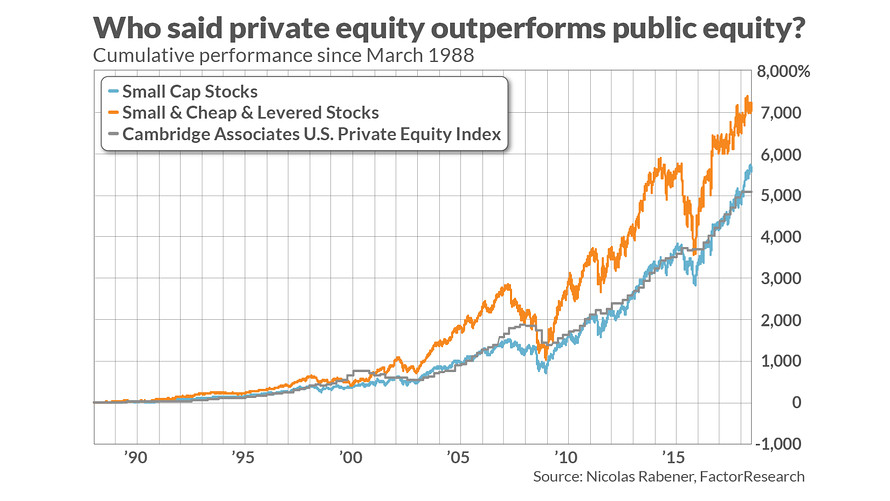 One comeback among some fans of private equity is that, even if PE firms on average haven’t outperformed the S&P 500 SPX, +0.08%  , at least their returns have been less volatile. During the 2008-09 financial crisis, for example, the average private equity firm lost less than the public markets.

But this lower volatility also is an illusion, according to Rabener. Since the companies owned by PE firms are not liquid, the firms have a lot of discretion in deciding how to value them. The inevitable result, he said, is that these companies’ month-to-month valuations (even quarter-to-quarter) are smoothed out, making them appear less volatile than they really are.

Rabener said he’s confident that, if there really were some way of accurately valuing PE funds as frequently as publicly traded firms, they on average would appear to be just as volatile. And their drawdowns during that financial crisis would have been just as great — if not greater. (Click here for an article Rabener wrote late last year in which he summarized his findings.)

Another defense of private equity is to insist that, on first principles alone, you’d expect a private company to outperform a public one. That’s because private companies don’t have to cater to the short-term demands of public shareholders. By being willing and able to incur short-term losses, they can pursue strategies that ultimately produce greater longer-term growth. That certainly makes sense — in theory. But it doesn’t appear to hold up.

Consider research published several years ago in the prestigious Journal of Financial Economics: “The Evolution of Capital Structure and Operating Performance after Leveraged Buyouts: Evidence from U.S. Corporate Tax Returns,” by Jonathan Cohn and Lillian Mills, both from the University of Texas at Austin, and Erin Towery of the University of Georgia.

The researchers were able to overcome what had been an impossible obstacle to comparing privately held companies’ performance with those of public firms. That obstacle was that, because a private company is private, there’s no way for an outsider to know how it is performing. But the study’s authors were given access to the corporate tax returns of over 300 previously public firms, and therefore able to deduce their operating performance in the years immediately after being taken private.

To compare them to public companies, the researchers carefully constructed a control group of publicly traded firms that were otherwise similar to the 300 firms that went private. On average over the three years after going private, Cohn said in an interview, the private firms did not perform any better than the comparable firms that remained public.

To be sure, Cohn added, his research isn’t the final word on the subject. It could be, for example, that three years after going private are not a long-enough period in which the benefits of doing so become evident in the firms’ operating performance. Nevertheless, he continued, his findings are consistent with the other research showing that, in a true apples-to-apples comparison, private-equity firms do not outperform public equities.

Of course, these research results are based on averages of many companies that have gone private, and there is wide variation in the performance of individual firms. So it could very well be that, if KKR’s takeover of Walgreens Boots Alliance goes forward, it will prove to perform better than it would if it were to remain a public company. But if you believe that now, you must base it on the specifics of Walgreens and KKR, not on the performance of private equity generally.

More: Why the prospective $70 billion buyout of Walgreens may signal the stock-market rally is about to end

Plus: Private-market investors feast, leaving scraps for the little guy