Home
Stocks
Market Extra: Dow on the verge of busting above milestone at 28,000
Prev Article Next Article

The Dow Jones Industrial Average was flirting with history on Friday—its first breach of a psychological milestone since mid July, as equity benchmarks mount an assault on records on the back of hope for progress in U.S.-China trade negotiations.

It has been roughly 90 sessions since the blue-chip benchmark achieved a 1,000 milestone and it took 372 days to trade above the last such psychological level. Here’s a look at the past round-number milestones for the 123-year-old stock gauge. 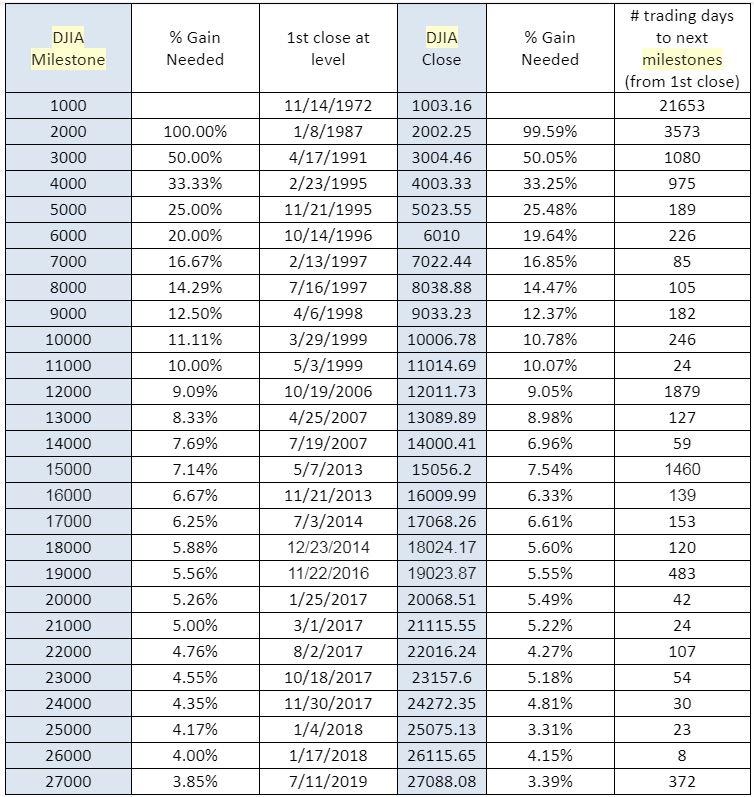 The rally for the Dow comes as the S&P 500 index SPX, +0.60%   and the Nasdaq Composite COMP, +0.64%  are on track to notch all-time closing highs after White House economic adviser Larry Kudlow on Thursday said negotiators are getting close to an agreement, but that President Donald Trump wasn’t yet ready to sign off.

Trump “likes what he sees, he’s not ready to make a commitment, he hasn’t signed off on a commitment for phase one, we heave no agreement just yet for phase one,” he said at a Council on Foreign Relations event, according to The Wall Street Journal.

President Trump’s international trade policies have been the biggest catalyst for volatility in U.S. stocks this year.

To be sure, there is nothing necessarily significant about the Dow eclipsing a round-number level but some market experts say such moves can spark so-called animal spirits, or bullish enthusiasm, among stock-market investors when benchmarks hit major milestones.