The Dow Jones Industrial Average marked history on Friday by finishing at a round-number milestone at 28,000, but the blue-chip benchmark couldn’t have scaled the thousand-point milestone without a rally in Apple and shares of Home Depot.

But to get that landmark level, the 123-year old benchmark received a 434-point boost from Apple Inc. AAPL, +1.19%, which finished at a fresh record on Friday and has surged more than 68% in the year to date, according to data from FactSet and Dow Jones Market Data.

Meanwhile, since mid-July, Home Depot HD, +0.31%   has contributed about 158 points to the benchmark and United Technologies UTX, +0.84%   added another 122 points over that period to Friday’s close. Home Depot’s stock has gained 38% so far this year and United Tech’s shares have climbed more than 40%.

The aviation and defense contractor has been wrestling with problems related to the grounding of its controversial 737 MAX fleet, which have been temporarily put out of commission since March following a pair of fatal crashes. It still remains unclear when the jets will return to service, but reports have suggested that it could come as soon as next month.

Meanwhile, the worst performers over the past 90-session stretch since the Dow’s latest milestone, have been McDonald’s Corp. MCD, -0.02%  and Travelers Cos. Inc. TRV, -0.28%, which each exacting 127-point tolls on the Dow. Shares of McDonald’s, which is still dealing with the ouster of its CEO Steve Easterbrook at the start of the month, are up 9.2% over the past 11 months, but have lost nearly 15% in November and 11.1% over the past three months.

Shares of Travelers have gained 8.3% in the year to date but have lost 8.3% over the past three months.

Check out a table of the Dow contributors below: 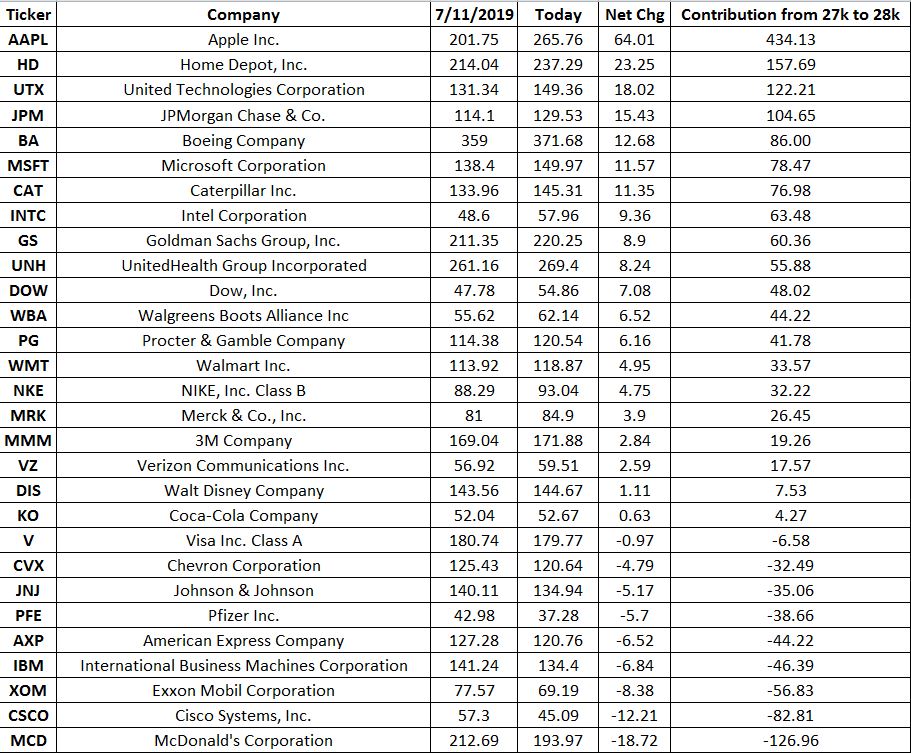