Home
Stocks
Market Extra: Elizabeth Warren’s ‘mug of billionaire tears’ costs $25 and is one of the hottest-selling items on her campaign website
Prev Article Next Article 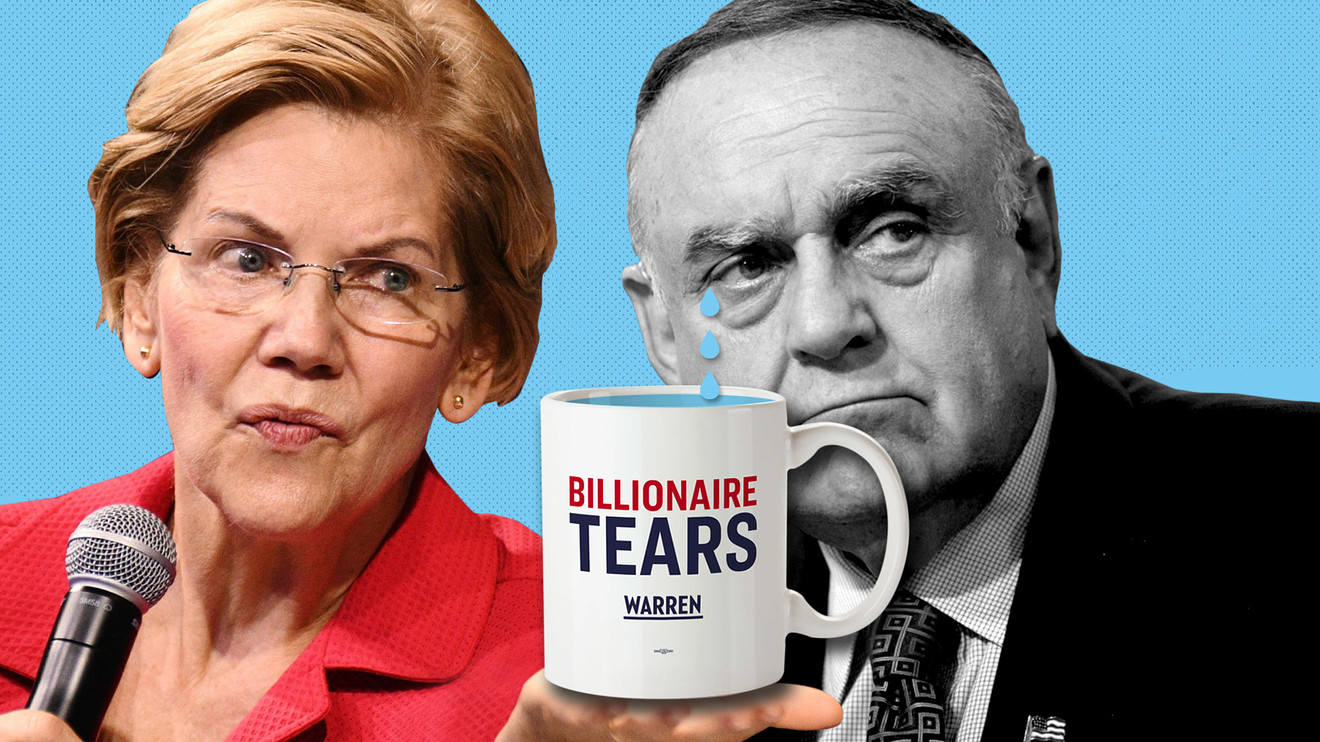 A cup for “Billionaire Tears” has become one of the hottest-selling items on Elizabeth Warren’s presidential campaign website, according to people described as familiar with that aspect of the campaign.

The cup is on sale for $25 and has been promoted by the 2020 presidential hopeful as a tongue-in-cheek knock at a number of billionaires who have groused about Warren’s tax on the wealthiest individuals in the country. It also rebuts the cups of “liberal tears” that became a minor sensation around the time of President Donald Trump’s election and afterward.

“Savor a warm, slightly salty beverage of your choice in this union-made mug as you contemplate all the good a wealth tax could do: universal childcare, student debt cancellation, universal free college, and more,” reads a description of the mug on Warren’s campaign site, which also notes that the 11-ounce cup is made in America.

It isn’t clear how many cups have been sold or the total sum raised in the approximately 48 hours since they went on sale, as Warren rolled out a campaign ad that took direct aim at Leon Cooperman, TD Ameritrade AMTD, +1.02% founder Joe Ricketts, former Goldman Sachs GS, +0.37% CEO Lloyd Blankfein and Silicon Valley luminary Peter Thiel.

Hedge-fund investor Cooperman, in particularly, has been vocal in his criticism of Warren. The Omega Advisor founder, who boasts a net worth of $3.2 billion, according to Forbes, said during one tearful declaration that Warren’s election to the presidency would lead to a plunge in the Dow Jones Industrial Average DJIA, +0.80% and the S&P 500 index SPX, +0.77% owing to what he has called her vilification of billionaires and other wealthy Americans.

Warren’s wealth tax is a proposed 2% annual levy on household wealth above $50 million and an additional 1% tax on wealth above $1 billion. It would affect about 75,000 households and raise between $2.6 trillion to $2.75 trillion over a decade, according to a Wall Street Journal calculation.

On Friday, a story in that paper described Warren’s tax plan as “the clearest expression of progressive Democrats’ fiscal philosophy. They lean heavily on taxes at the top of the income and wealth scale to finance these expanded programs.”

A number of Cooperman’s fellow 1%-ers, including Microsoft Corp. MSFT, +1.29% founder Bill Gates, have voiced a concern that it could appear wealth is being vilified by the Warren campaign. “You really want the incentive system to be there, and you can go a long ways without threatening that,” Gates said, speaking at the New York Times–hosted DealBook Conference.

Meanwhile, one article from Daily Caller appeared to find some irony in the fact that Warren’s mugs were being sold through Shopify SHOP, -0.01% , a company whose founder, Tobias Lütke, is worth $2.8 billion.