Home
Stocks
Need to Know: This forecast predicts barely any growth in U.S. stocks next year — and a big drop if there’s a recession
Prev Article Next Article

First, the good news — though it’s not great. In a new forecast, Oxford Economics expects the global economy to stabilize in the first half of next year.

“We believe the economy is bottoming out at close to its new structural rate of growth. Poor demographics, the cumulative effect of years of weak public and private investment and the ongoing weakness in productivity mean that we are going to have to get used to lower growth,” the Oxford Economics team writes. If a recession occurs, it will more likely be a 2001-style mild one rather than a 2008 bloodbath.

Now for the bad news: financial markets are overvalued, according to Oxford Economics. “The twin pressures of weak pricing power and low productivity imply a bleak outlook for margins – warning signs of a market that seems to have got ahead of itself,” it says. The expected return for U.S. stocks next year, according to the Oxford Economics model and our call of the day, is just 1%, and nothing at all for bonds. 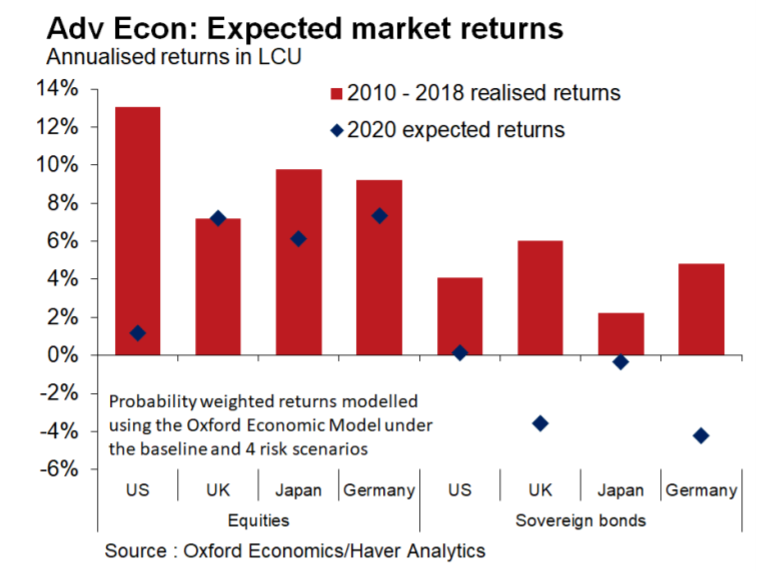 Innes McFee, managing director of macro and investor services at Oxford Economics, said U.S. stocks are overvalued by around 35%. So if there is a recession, a correction might hit stocks by that amount or even more.

He also pointed out that in the seven times when global GDP has slowed by 1% since the 1980s, G-7 central banks have cut interest rates by an average of 300 basis points. They clearly won’t be able to do that this time around, since the average interest-rate level right now is 75 basis points. “There is not a lot of room to maneuver,” he said. And it may be that policy rates are less effective than in the past in stimulating the economy.

Optimism was in the air after White House economic adviser Larry Kudlow told the Council on Foreign Relations that the “mood music is good” on reaching a potential early-stage U.S.-China trade deal.

The latest economic data showed that retail sales in October rose 0.3%, though not much at all when autos and gasoline were excluded, while a measure of New York-area manufacturing showed tepid growth in November.

Amazon AMZN, +0.08%  plans to protest the award of a 10-year, $10 billion Pentagon cloud-computing contract to Microsoft MSFT, +0.51%  that many assumed would go to the online retailing giant.

Nvidia NVDA, +0.58%  forecast a return to revenue growth after four quarters of decline as the chip maker beat estimates for its quarterly results.

The world’s largest Starbucks SBUX, +0.52%  store is opening, in Chicago. RH RH, +1.29%  shot up in premarket trade after a filling showed Warren Buffett’s Berkshire Hathaway is building a stake in the furniture retailer.

BT BT.A, -1.71%  shares fell in London after a proposal by the opposition Labour Party to partly nationalize it. 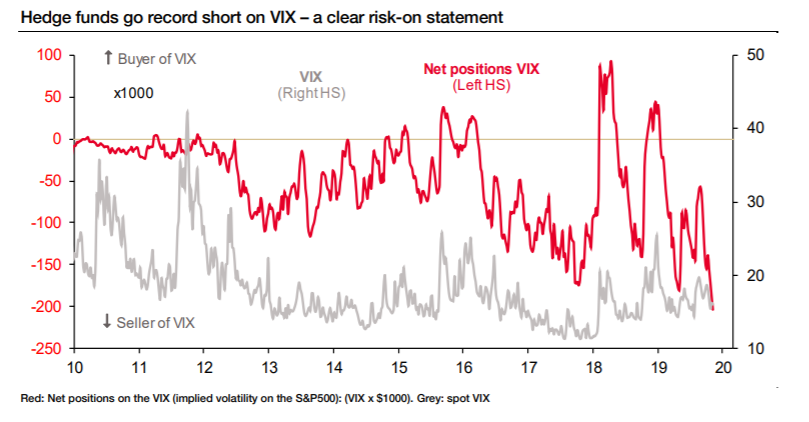 According to Société Générale’s tracking of hedge fund positions, via data from the Commodity Futures Trading Commission, there are record short bets against the VIX VIX, -1.76%, the volatility measure. “Such a bold move can be understood as a clear risk-on statement,” the French bank said. Net long positions on emerging market equities jumped to near-record highs in anticipation of a positive trade war result.

Cleveland Browns defensive end Myles Garrett ripped off Pittsburgh Steelers quarterback Mason Rudolph’s helmet and hit him with it at the end of the Browns’ 21-7 victory.

A government audit has revealed that NASA went out of its way to overpay Boeing BA, +1.36%   for its Commercial Crew Program astronaut launch services.

Ejected — a black hole threw a star out of the Milky Way galaxy.