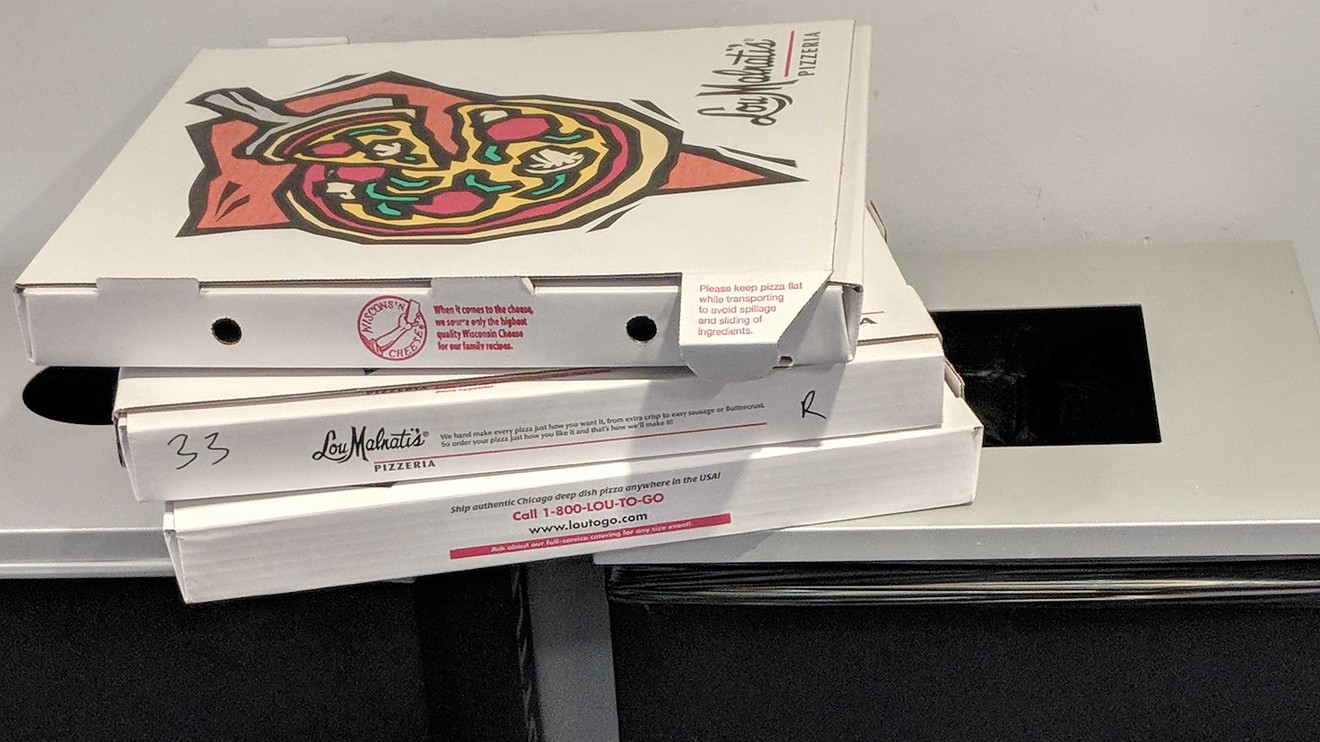 Tossing a pizza box into the recycling bin seems like a guilt-free chaser to America’s favorite dining shortcut. Yet a standard cardboard pizza box, with its greasy remnants, is large enough to contaminate other recyclables in the bin.

Pizza boxes are one of the biggest recycling sins among many committed by well-meaning consumers — “wishcyclers” is one term to describe them.

The best chances for successful paper and plastic recycling comes with abiding by tossing only “empty, clean and dry” containers and avoiding hazardous and too-large materials all together (more engine blocks and bowling balls have found their way into curb-side bins than you’d care to think about). Recycling small items, such as shredded paper, hurts operations at the sorting facility as well.

“The ketchup bottle, soda can, any type of container that has residue can pose a real challenge and the majority of packaging material is fiber based, which means liquid or food can really soak in and thus that’s contaminated if not washed and dried,” said Pete Keller, vice president of recycling and sustainability at Republic Services RSG, -0.25%  , the second-largest U.S. provider of non-hazardous solid waste and recycling handling, including sorting facilities.

Bottled water is nearly as prevalent as water itself, Did you know today nearly 60 million empty water bottles end up in landfills daily? #AmericaRecyclesDayhttps://t.co/7Mx3ZSH0hh pic.twitter.com/I7BYMDNHUq

On Friday, Nov. 15 was declared America Recycles Day, an event to build recycling program awareness, we offer tips from recycling-industry operators on how to keep recyclable items from still hitting the landfill.

1. Trash audit. One the most effective ways to ease the recycling sorting challenge and lend an even bigger boost to habitat preservation and keeping plastic out of the world’s waterways is to cut down on new plastic use. But small behavior changes may not achieve the depth of result you want. Instead, conduct a whole-house audit to see where you’re accumulating the most single-use plastics, and work to eliminate them, suggests Curbed.com, in its “101 Ways to Live Sustainably” guide. One blogger, in her own audit, discovered she generated 65 pounds of measurable waste (no, not that kind) in one month, some recyclable, some not.

2. Try topless. Take an extra beat to think how a particular item may best be recycled, perhaps in part not whole. One way to recycle that used pizza box is to cut off its presumably cleaner lid and recycle that portion exclusively. That is, unless it too has the forensic trail left by the pepperoni and mushrooms. Box makers may increasingly do their part to use smarter materials that could cut down on waste. Yum Brands Inc.-owned Pizza Hut YUM, +0.17%   is newly testing a round pizza box that uses less overall packaging and is compostable, meaning it won’t have to be tossed in with the recycables going to the sorting facility but can degrade on its own.

3. Major disqualification: recyclables in plastic bags. For household convenience and, presumably, because recyclers think it’s easier for the collectors and sorters, too many Americans toss cans and bottles in plastic grocery bags and drop the whole lot in the recycling bin. Keller of Republic Services says his sorters are trained to avoid plunging their hands into bags packed with items for their own safety, because the belt moves along too quickly for overly detailed sorting and because contamination will be likely. Instead, consumers should take plastic bags directly back to retailers and the collection bins often found there. There are also programs throughout the U.S. that ban plastic bag use and encourage nondisposable cloth bags for carrying groceries and other shopping.

Related: With refillable deodorant and naked products, Unilever thinks it can halve virgin plastic use by 2025

4. No batteries, no exceptions. Car battery-disposing programs help keep this violator largely out of the recycling bin, but consumers seem all too comfortable dumping other types of batteries in regular curbside recycling programs, where they don’t belong. Confusion may arise in part because batteries are marked with a “not-for-trash” icon that may be misunderstood as a greenlight to recycle them with other items. The ban extends to dry-cell batteries such as the AAA variety to the lithium-ion batteries commonly used for portable electronics. Consumers should try battery-specific recycling services such as the Call 2 Recycle program with receptacles at most home improvement stores. TerraCycle is another U.S.-based business that focuses on removal of hard-to-recycle items.

5. Recycling versus reuse. Experts say that too many clothing items and shoes find their way into the traditional container recycling programs operated by cities. Many of the sorting facilities are not equipped nor contracted to set these items aside and donate them to nonprofit reuse programs.The responsibility lies with consumers to donate clothing, including for instance to the jean programs that turn denim into building insulation.

6. Shredded paper is just trash, unfortunately. Electronic communication and file-keeping means there is less paper in circulation. But that physical paper trail — much of which may be recyclable if not coated or may even be made from recyclable material already — is an enemy of the sorting centers’ mechanical machinery once it’s shredded. Add plastic cutlery and straws to the no-list as their size and shape complicates the sorting process, too, and off they go to the trash heap.

7. Yard waste: Add a bin. Keller of Republic Services said some consumers are putting in the recycling bin the grass clippings, leaves, vegetable peelings and other biological waste than can break down via anaerobic digestion, just not alongside paper and metal. That means households should follow municipal rules for composting and keep this type of “recycling” in its own bin.

Read: MrBeast and PewDiePie will ‘freaking do something about climate change’ by planting 20 million trees

8. Beware the tanglers. A material might be recyclable technically but the composition of the item excludes it. Keller called them “tanglers,” hoses and ropes, for instance, that clog the machines at his sorting facilities. Diapers are another confusing culprit. Their inclusion in the color-coded bins might only be explained by the likelihood that too many households use the recycling bin simply as a second garbage can.

Read: Fast shipping isn’t great for the environment— 7 ways to cut the carbon footprint on your Amazon deliveries

9. Flexible packaging not a panacea. Changing the way that products are wrapped, including cutting down on rigid containers, using, as an example, detergent pods or refillable bottles using concentrates, has gained traction. But recycling center experts say flex packaging, for instance if a smaller package still requires multiple layers of covering including a foil layer for safe shipping, are challenging for their facilities. On Friday, two members of Congress and a coalition of businesses and trade groups in plastics, waste management and other materials advanced a $500 million federal legislative proposal that they see funneling more money to upgrading the recycling infrastructure, such as upgrades to material recovery facilities to better handle flexible film and other new kinds of packaging.