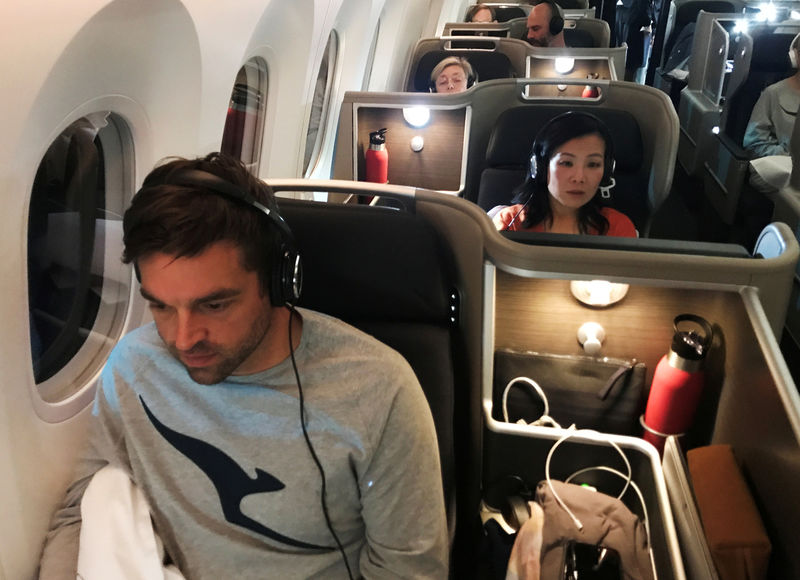 SYDNEY (Reuters) – When I signed up to join a trial run of the world’s longest commercial flight, I expected an exercise in endurance but not steak for breakfast and a physical work-out regime.

In preparation for its first 19-hour non-stop commercial flight planned for 2022-3, Qantas Airways is carrying out three dummy runs from London and New York to Sydney to test the effects of ultra-long haul flying on passengers, staff and pilots alike.

Although I travel frequently for my job as a TV journalist, this “research flight” was a whole new experience.

On board were six test passengers under constant electronic monitoring by the Australian carrier. I and a handful of other journalists largely shared their experience, minus the wires.

It began with a London sunrise and an early-morning dinner, followed by lights-out as we immediately adopted Sydney time – part of the regime drawn up by a specialist team to coax our body clocks into making the 11-hour leap.

That meant a sleep-inducing carb-fest of steak sandwich and soup instead of the expected breakfast. I turned down the wine.

So after the eight-hour blackout and a breakfast spiked with chilli – to boost the metabolism – Caillaud led regular bouts of stretches and squats, performed in the aisles with varying degrees of enthusiasm by her guinea-pig passengers.

Besides raising alertness, the airborne work-out is also key to reducing the risk of deep-vein thrombosis on such a long flight.

The meals, sleep schedules and encouragement to exercise are likely to figure to some extent in the cabin service eventually offered to Qantas’ commercial customers on these routes.

To fly direct to Sydney with a full passenger load, Qantas will need a longer-range plane than the Boeing (NYSE:) 787-9 Dreamliner we flew in, which was more than three-quarters empty.

The airline is betting that customers will pay more to avoid stop-offs. The new aircraft it’s poised to order from Boeing or Airbus will have cabin features tailored to ultra-long haul, and unprecedented space in coach class.

The interiors will offer a “very designed product for long-haul travel”, as Qantas CEO Alan Joyce explained to me during the flight.

“Our intention is to have a bigger seat pitch in economy than we’ve ever done before, and have dedicated stretching areas in economy.”

So how did I sleep?

And although I can’t be sure, the carefully scheduled meals and blackouts may have left me feeling slightly less destroyed than I otherwise might after soldiering through two sunrises, with a final flight time of 19 hours and 19 minutes.

More reassuringly, the test passengers did largely manage to sleep on cue, and fared much better.

“I feel really well,” Andy Chevis, a Sydney-based management consultant, exclaimed during the final approach. “Probably a lot better than I normally would at this point in the flight.”