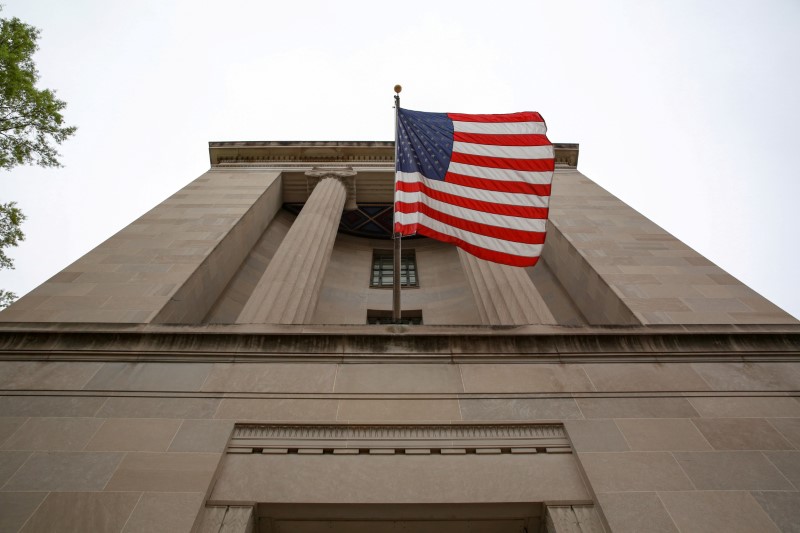 © Reuters. FILE PHOTO: A general view of the Department of Justice building is seen ahead of the release of the Special Counsel Robert Mueller’s report in Washington

NEW YORK (Reuters) – The Department of Justice has charged another former JPMorgan Chase & Co (NYSE:) executive with alleged racketeering and manipulating precious metals prices between 2008 and 2016, the latest in a string of similar prosecutions.

The indictment against Jeffrey Ruffo, who is also charged with other federal crimes including conspiracy to commit wire fraud, is the result of an “ongoing investigation”, federal prosecutors said in a statement.

Ruffo is the sixth person to be charged with alleged fraud in connection to JPMorgan’s precious metals desk.

The case relates to spoofing, which involves placing bids to buy or offers to sell contracts with the intent to cancel them before execution, allowing spoofers to influence prices. In recent years there has a been a surge in spoofing related prosecutions in the United States by the Department of Justice and the Commodity Futures Trading Commission.

A JPMorgan spokesman did not immediately respond to a request for a comment. The U.S. bank has said in recent regulatory filings that it is cooperating with various investigations relating to its metals trading practices.

According to the indictment, Ruffo worked at JPMorgan from 2008 to 2017 as a salesperson serving hedge funds investing in precious metals and he encouraged JPMorgan traders to place deceptive orders to create price advantages for his clients.

The indictment also alleged that Ruffo and his former colleagues defrauded JPMorgan’s clients who had invested in “barrier options” by pushing option prices to levels that benefited the bank.

An option is a financial instrument that gives buyers the right to buy or sell an underlying asset at an agreed price and at a fixed time. Its value is tied to the value of the asset.

While previous spoofing prosecutions have led to guilty pleas, a former metals trader at the Swiss bank, UBS Group, was acquitted by a jury in a similar case last year. The acquittal highlighted the difficulties in making a case that cancelling orders is a criminal act, given that many market orders go unfilled.

Some lawyers also argue it is aggressive to charge bank executives with a racketeering conspiracy, which is usually associated with organized crime.

The charges were filed on Thursday and made public on Friday.