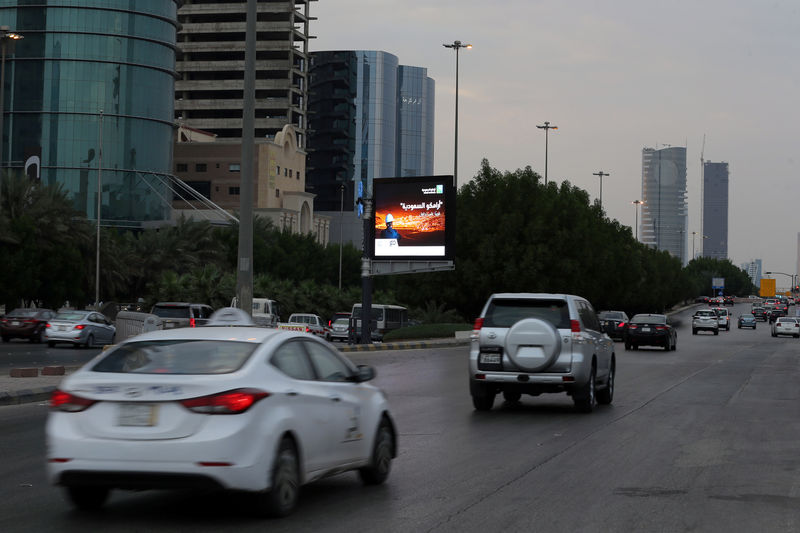 RIYADH (Reuters) – “No voice is louder than that of the Aramco IPO, the largest IPO on earth,” declared Ahmed Al-Arfaj, a Saudi Arabian TV talk show host, drumming up demand for what could be the world’s biggest initial public offering.

State oil giant Saudi Aramco began its repeatedly delayed share sale on Sunday, offering retail investors and institutions a stake in the world’s most profitable company through a listing on Riyadh’s Tadawul bourse.

Saudis clamoring to own part of the world’s top oil exporter can go online or to local banks, which have extended working hours to meet high expected demand during a sale process that runs until Nov. 28.

Roadside billboards and shopping mall adverts have trailed the listing for weeks, hailing “Saudi Aramco, soon on Tadawul”. On social media, in cafes and at family gatherings across the country, it has dominated conversations.

“I will invest in the company for the long term,” he told Reuters. “I will get bonus shares, and with the profits I will buy more shares. It is a once-in-a-lifetime opportunity.”

The marketing blitz contrasts with the other bumper share sale this month, the secondary listing of Chinese retail titan Alibaba (NYSE:) in Hong Kong, a city gripped by protests. Alibaba is not expected to carry out an advertising campaign for what will be Hong Kong’s first paperless listing.

In Saudi Arabia, retail investors will be entitled to one bonus Aramco share for every 10 they buy if they hold on to their stock for at least 180 days. Up to 5 million people are expected to participate, local media reports.

Tens of thousands of Saudis were seeking to invest on behalf of all their dependents, to increase the number of shares they can buy, two bankers told Reuters.

Saudi banks are also marketing loans, with some offering four times the usual limits, two other financial sources said, adding that they are able to do so as they will hold the stock on behalf of clients so have it as security.

A 37-year-old government employee who declined to be named said his bank offered him an interest-free loan repayable within three weeks, but that he planned to use his savings instead.

A member of the kingdom’s highest religious body, the Council of Senior Scholars, said during a weekly Friday radio show that investing in Aramco was permissible.

“It (Aramco) is a pillar of the Saudi economy,” Sheikh Abdullah al-Mutlaq told a caller asking about the offering. “I think even the scholars, we will participate in it.”

The government has been pushing rich Saudis to invest with cash held abroad, with many viewing it as an opportunity to show their patriotism after a September attack on Aramco facilities that struck at the heart of the kingdom’s energy industry.

Washington and Riyadh blamed regional rival Iran for the attacks, which temporarily cut more than 5% of global oil supply. Tehran has denied any involvement.

“Participating in the Aramco IPO is a national duty for whoever can afford it,” Saudi columnist Anwar Aboalela tweeted.

Another Twitter user, Meshal Althaidy, described Crown Prince Mohammed’s push to take Aramco public – the centrepiece of a reform agenda aimed at weaning the economy off oil – as “a fierce battle” that Saudis should support.

Although some locals think the government is wrong to relinquish even partial control of Aramco, the prospect of holding shares is hard to resist.

“Aramco will be a winning horse,” said Uber (NYSE:) driver Abu Mohsen. “I will subscribe only because of the expected gains but I remain against the sale, especially to foreigners.”