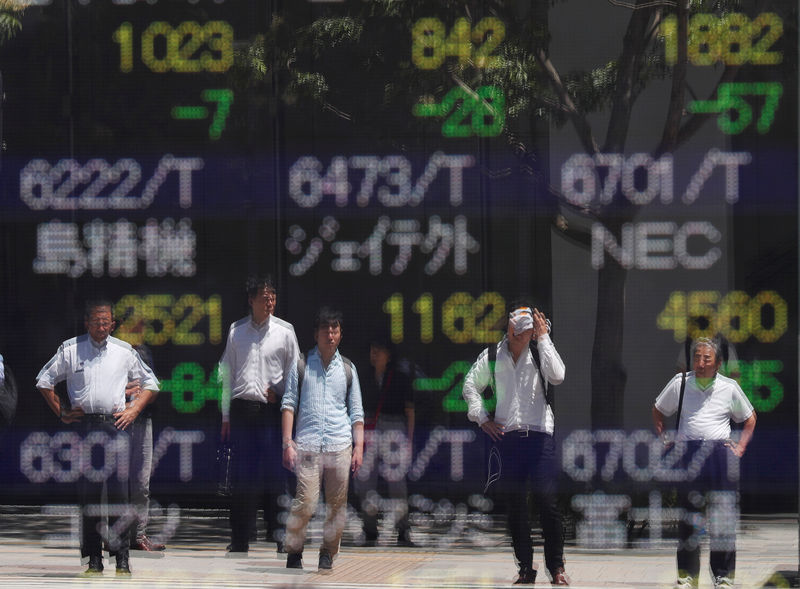 SYDNEY (Reuters) – Asian shares ticked higher on Monday after Beijing surprised markets by trimming a key interest rate for the first time since 2015, stirring speculation that further stimulus was on the way for the world’s second-largest economy.

Beijing’s latest policy shift added to hopes it might also be more serious about making progress in trade talks with the United States.

“More than in previous rounds, we see momentum toward reaching at least a limited trade deal, and certainly a mini-deal would remove some of the negative sentiment overhang for the real economy and markets,” said Patrik Schowitz, global multi-asset strategist at J.P. Morgan Asset Management.

“We have upgraded our outlook on equities as an asset class,” he added. “Emerging market equities are now our most favored region alongside U.S. large cap equities.”

LOOKING TO THE FED

In currency markets, the dollar was little changed against its main peers on Monday and well within recent tight trading ranges. Indeed, volatility in the market has been the lowest in decades recently and shows no sign of shifting.

The euro idled at $1.1063 () having found support at $1.0987 last week. Investors are awaiting the first major speech by European Central Bank President Christine Lagarde due on Friday for clues on future policy.

Sterling nudged up to $1.2926 as more polls showed the Tories well ahead in the election race.

The dollar and bonds are likely to be sensitive to minutes of the Federal Reserve’s last policy meeting, set to be released on Wednesday.

“The minutes are likely to reiterate that the U.S. economy is ‘solid’ and that current monetary policy settings are ‘appropriate’, which would support the dollar,” said Joseph Capurso, a currency analyst at Commonwealth Bank of Australia.

However, he noted the soft report on October U.S. retail sales released on Friday suggested previously strong consumption was showing some cracks.

“Any further weakness in consumption could warrant a material reassessment of the outlook by the FOMC.  Under our baseline, the FOMC would most likely start cutting interest rates again in 2020,” said Capurso.

eased a fraction to $1,466.17 per ounce as it tracks every passing twitch in risk appetite.

Oil prices were supported after Brent touched a seven-week high on Friday. [O/R]