Home
Stocks
Beat the System: These former hedge-fund managers quit Wall Street to live on the open seas — at $1,500 per month
Prev Article Next Article 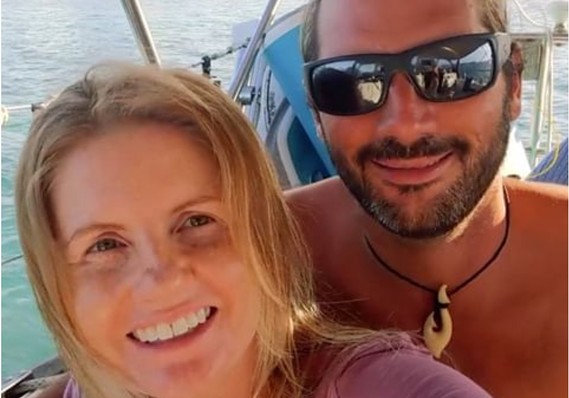 If you dream of ditching the 9-to-5, the miserable commute and the annoying office, and setting sail on the open seas, Grace Heaton has a simple message for you.

“If you want to do this, you’re not crazy,” she says. “There are so many more people out there than I had imagined.”

‘It’s made me a much stronger person and a more confident person.’

It’s now two years since Grace, 37, joined her husband Bill living full-time on their 36-foot yacht, Calico Skies. Both were working at hedge funds on Wall Street, earning more than $200,000 a year. They dumped it all to sail into the blue. They’ve already sailed more than 25,000 miles, including crossing the Atlantic both ways.

“I definitely value adventure and spontaneity a lot more than I did,” Grace says. “I’ve seen what these things have done to me as a person, and they’ve caused a lot of growth. It’s made me a much stronger person and a more confident person.”

The couple met in college and have been together ever since. Bill was the sailor. “I grew up sailing,” he says. “My grandfather taught me at a young age.” He had dreamed for many years of sailing around the world.

They spend about $1,500 a month aboard. That includes food, fuel, a cellular phone and a satellite phone, and insurance premiums for their yacht and catastrophic health care. For cheaper health care, they say, they also sail to places like Grenada, where it is far cheaper than in the U.S.

Boat maintenance and repairs are on top of that, and can easily run into many thousands a year. They paid $65,000 for their yacht, but have probably spent the same amount fixing it up. Buying a smaller boat, at 36 feet, has helped save them a lot on running costs, they say.

Their expenses include a cellphone, satellite phone, insurance premiums for their yacht and catastrophic health care.

What advice do they have for people are dreaming of following in their (wet) footsteps? “Save your money,” says Bill. The couple tightened their belts sharply in New York for a couple of years to save up before the move. That included slashing rent by $25,000 a year by moving from tony Manhattan to an edgier neighborhood in the outer boroughs, and cutting back on spending as much as they could.

For Grace it’s been a learning experience. She warmed up to it over time.

The couple bought their boat in 2009, and moored it near New York. Initially, they just spent weekends on it. By 2014, it was their home for five months of the year. They commuted to their Wall Street jobs every morning by dinghy, car and train. “Our co-workers thought I was pretty funny,” recalls Bill. “We didn’t have hot water for showers.”

“There were a couple of times when the dinghy engine wasn’t working and we had to row,” adds Grace.

In 2016, Bill dumped his job and moved to the boat full-time. Grace planned to join him a few months later, but initially got cold feet. “I was reluctant to quit my job,” she says. She made the move the following year.

Anyone who thinks that living on a boat is all lazy cocktails and sunsets is in for a rude awakening, they say. It’s hard work. The couple now have a YouTube channel GOOG, -1.07% GOOGL, -1.12%   in which they keep a video diary of their travels, and Bill notes that one of the common remarks among viewers is: ‘Wow, you guys are working hard.’

“You really don’t realize how many conveniences there are in everyday life until you don’t have them anymore,” says Grace. Life aboard means going without everything from flush toilets to washing machines to dishwashers. Buying food ashore, storing it and cooking it becomes a project. Toilets need to be hand pumped to flush. You have to cook every meal. “It makes everything in life a lot slower,” she says.

They’ve both had to learn a lot about yacht maintenance and sailing along the way. “I was not handy at all when I bought the boat,” says Bill. But they’ve had a lot of help along the way from their fellow sailors. There is, they say, a big and vibrant community of “cruisers” who have quit the rat race for the open sea.

There have been tough times, they admit. The main causes: Bad weather, and on-board breakages. There have been some brutal passages over rough seas, they say. Grace is vulnerable to seasickness.

“The highs are really high, and the lows are really low,” says Bill. Some of the experiences “are sublime,” he says. “You’re sailing through beautiful places or cruising the ocean.” They recently spent time in the Bahamas, spear fishing with other cruisers and holding bonfires on the beach most nights.

Cruising, they say, is very sociable. “There’s a sub-society of people doing this,” says Grace. “It’s a very spontaneous lifestyle. You get people coming over to introduce themselves and you end up having dinner together.” It’s not unusual, they say, to sail into a harbor somewhere in the Caribbean and encounter fellow cruisers you last saw hundreds, or even thousands, of miles away.

But most of the time is spent in close proximity together as a couple. “We’ve definitely deepened our friendship and our relationship,” says Grace. “You really spend so much more time with someone when you’re sharing a boat.”

They haven’t sailed around the world. Yet. Nor do they know what the future holds. They’ll carry on sailing so long as it stays fun, says Bill.

Finances, alas, are the tricky issue. The pair worked at hedge funds, but they were employees, not partners. Their combined income, more than $200,000 a year, is way more than that earned by most Americans. But this was in New York, so they were paying hefty taxes and living costs. They weren’t honchos making tens of millions. For now they’re living on savings. But they say they will need to earn money at some point.

They’ve tucked retirement funds away and are leaving them to grow quietly in the background. “It’s just a matter of working out how to plug the gap for the next 30 years,” says Bill. They hope to make money from their YouTube channel. They are planning to set up a Patreon account, where fans of the videos could subscribe directly. Bill says they may run boat charters if they need to. They are still looking at ideas.

What have they learned from their experience? The less you waste on land, the faster you can get on the ocean. “Don’t go chasing things that you think will buy happiness,” says Bill. “For true happiness you don’t need material things.”

“Don’t let go of the dream,” adds Grace. “Hold on to that, and nourish it. You need that fuel to make all these decisions and sacrifices, and to get where you want to go.”