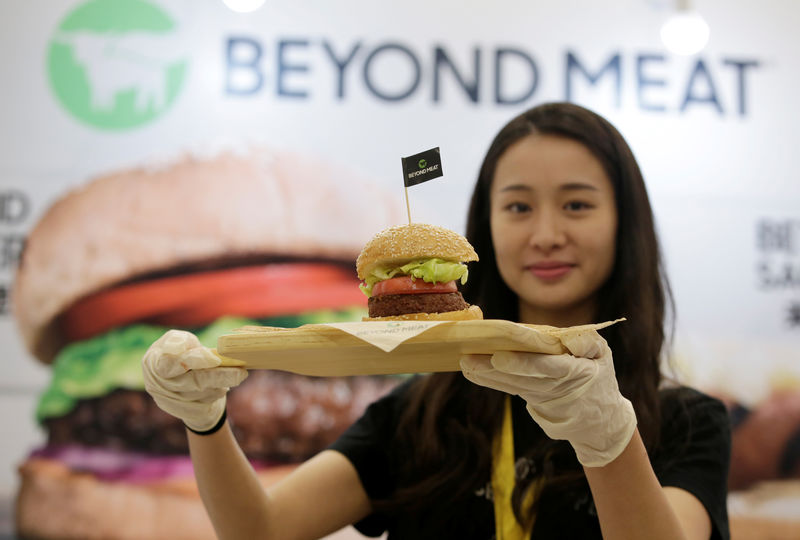 © Reuters. Staff member displays a burger with a Beyond Meat plant-based patty at VeggieWorld fair in Beijing

By Pei Li and Brenda Goh

BEIJING/SHANGHAI (Reuters) – U.S. plant-based “meat” makers targeting China like Impossible Foods and Beyond Meat Inc (O:) will need to battle homegrown rivals which are developing local favorites such as dumplings and mooncakes to nab a share of the lucrative market.

China’s meat substitute industry has seen a surge in interest in recent months, with startups, traditional food businesses and investors betting trend-loving Chinese consumers will take to plant-based protein like their U.S. counterparts.

A devastating pig disease and bruising Sino-U.S. trade war that have combined to push up meat prices are also playing a role.

Among the new players are names like Zhenmeat and Starfield, while long-time plant-based companies including Whole Perfect Food are rolling out new products.

Ham producer Jinzi Ham (SZ:) saw its share price soar 50% in a week after it announced in October it would start selling meat made out of plant protein that it developed with Danisco (China) Investment, a unit of U.S. firm DuPont (N:).

But unlike Impossible Foods or Beyond Meat, most Chinese companies are not making burgers, instead focusing on local dishes such as dumplings, mooncakes or meatballs, and opting for pork rather than beef flavors in recognition of local palates.

“American and European companies have rich experience in frying, roasting, and baking, we have a different dieting culture and cooking recipes,” said Zhou Qiyu, a marketing executive at Whole Perfect Food.

One-year-old Zhenmeat, whose name translates to “treasure meat”, for example, was touted by Chinese state media as the country’s answer to Beyond Meat after it used “meat” made out of pea-based protein in its mooncakes, a popular snack eaten during the country’s Mid-Autumn Festival.

Zhenmeat’s co-founder Vince Lu said the company, which has partnered up with noodle manufacturer Yantai Shuangta Foods (SZ:), was looking into making meatballs and dumplings.

“We are analyzing the flavoring behind pork meat, and we are taking on that to make a difference between our competitor from the U.S.,” he said.

Whole Perfect Food, which for the last 20 years has mainly catered to China’s mostly vegetarian Buddhists, recently rolled out a range of sausages made from soy and pea-based protein. The sausages come in 40 varieties, including spicy Sichuan and soy-seasoned beef.

Zhou said the firm was open to working with foreign companies. It had earlier this year conducted a trial partnership with Walmart (N:) which has since ended but has partnerships with Alibaba Group Holding’s (N:) Hema chain and Tencent-backed (HK:) retailer Yonghui Superstores.

China’s “free from meat” market, which includes plant-based products meant to replace meat, has grown 33.5% since 2014 to be worth $9.7 billion last year, according to Euromonitor. It predicts that the industry will be worth $11.9 billion by 2023.

Impossible Foods has identified mainland China as its No.1 overseas market for future expansion and says its Impossible Burger product can we easily adapted for use in Chinese cuisine.

This month showcased the use of its plant-based meat in dishes such as “Impossible Lion’s Head Dumpling in Broth” at a high-profile Shanghai import fair. It says it is developing prototypes of many different products including pork but has no immediate plans to commercialize them.

“We have tons of inbound interest. They are just waiting for us to get clearance to sell in China,” said its CEO Pat O. Brown, when asked if Impossible Foods had been meeting with retailers and restaurants.

Beyond Meat’s executive chairman Seth Goldman told Reuters it plans to customize its pea-based meat for the Chinese market to make dumplings and other products. The company is aiming to start production in Asia by the end next year before eventually expanding to China.

“It’s the same palate. There’s nothing about what we’re doing that prohibits us from making a product that would have appeal in the Chinese market,” he said.

China is no stranger to food using vegetarian ingredients to give a meat-like flavor, for years consuming tofu and similar “mock meat” products made out soy beans.

“If you simply use pea protein, or soy protein, and then add a lot of additives to make them stick together and then sell to the market, there is no real innovation, the taste is really bad, from a consumer perspective, we don’t believe the demand will be able to meet that oversupply.”

“The texture of Yangzhou-style meatball is very dimpled, while hotpot meatballs are crispy,” he said. “Foreign plant-based food might not succeed in China because they don’t fit Chinese stomachs.”

The sheer size of the market means ample opportunities are likely, and the timing looks good.

China is currently grappling with surging prices for pork, its mainstay meat, after culling an estimated half its herd due to an epidemic of African swine fever. A bruising trade war with the United States has also raised prices of beef and other meat products.

“We believe this is a huge driver for the trend of plant-based protein happening in China, but again, it’s slow,” said Ho of Bits x Bites.

Producers can rely on demand from younger Chinese consumers, many of whom are avid followers of food trends and love to try new cuisines.

Among them was 23-year-old Liu Dongyang, a vegetarian who traveled 160 km (100 miles) from her home in Guangzhou to try Impossible Foods’ meatless burger patty in Hong Kong.

She says the buzz over plant-based trend has sparked an interest in vegan diets from her meat-eating friends.

“My friends used to think vegetables and meat are completely different kinds of food. But now when we go to restaurants that serve plant-based food, they are very delighted and interested.”