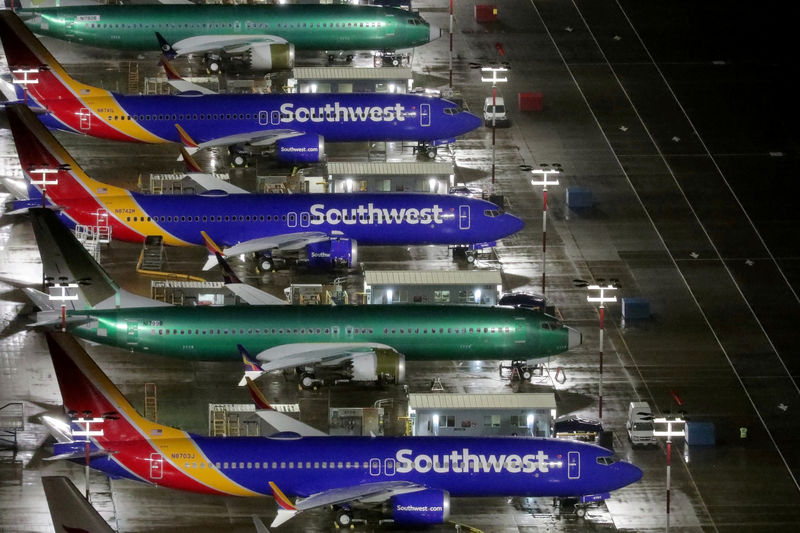 CHICAGO (Reuters) – Boeing Co (N:) this week will present to the board of its largest 737 MAX customer, Southwest Airlines Co (N:), an overview of its plans to return the grounded jet to service, a spokesman for the airline said on Monday.

The meeting on Wednesday and Thursday comes after Southwest Chief Executive Gary Kelly said last month that the airline could look next year at diversifying its fleet beyond Boeing 737 aircraft. Budget-friendly Southwest has structured its business model around flying only 737 aircraft for the past 50 years and bet its entire growth strategy on the 737 MAX, the latest iteration of Boeing’s narrowbody workhorse.

With the MAX parked since mid-March following crashes on Lion Air and Ethiopian Airlines that together killed 346 people, Southwest has had to scale back its growth plans and cancel north of 100 daily flights, wiping $435 million from its earnings between January and September.

Kelly, who is also Southwest’s chairman of the board, invited Boeing to address the timing and logistics of dozens of 737 MAX deliveries that it was supposed to receive this year. The meeting will also give Boeing a chance to defend its product and the steps it is taking to restore public confidence after the two fatal crashes, sources said.

“It’s an overview of the Return to Service Plan, timing, and plans moving forward,” Southwest spokesman Chris Mainz said. “Just a good chance for our Board to hear directly from Boeing, but nothing more to it than that.”

It is not the first time that Boeing has presented to a regularly scheduled board meeting, he said.

Southwest had 34 MAX jets in its fleet when global regulators grounded the aircraft in March. The airline was supposed to receive 41 more 737 MAX planes before the end of the year, but most of those deliveries are now scheduled for 2020.

Hundreds of undelivered 737 MAX jets are parked at Boeing facilities in Washington state, where the planemaker is facing a delivery logjam once the U.S. Federal Aviation Administration gives approval for them to fly commercially.

While Boeing is targeting approval in December, the FAA has pushed back on any fixed timeline.

Southwest has removed the 737 MAX from its flying schedule until early March. The airline has said it will need one to two months to train its pilots and prepare the jets for flight once regulators approve new software and pilot training.