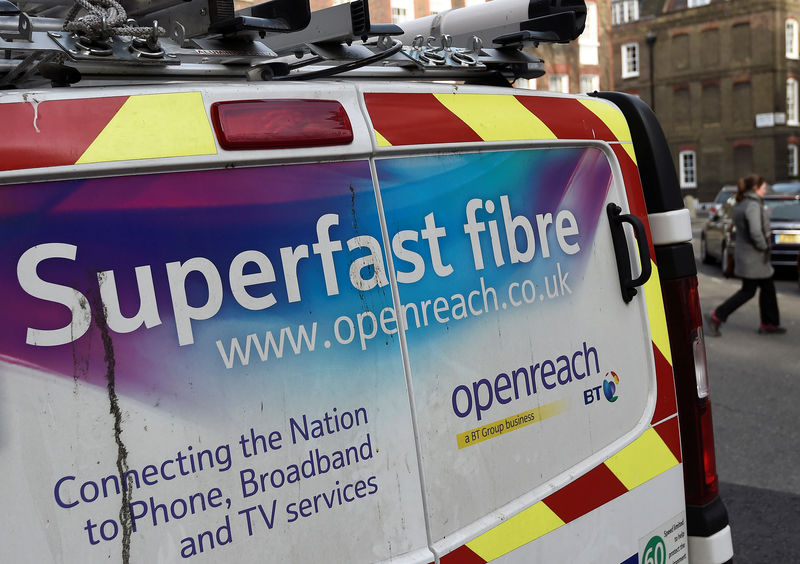 LONDON (Reuters) – British utilities are becoming increasingly popular with bond investors who believe their debt may benefit if a Labour government comes to power in December’s general election and takes them into public ownership.

Labour’s finance spokesman John McDonnell last week detailed the party’s plans to nationalize parts of BT (L:) to provide free broadband for all if it wins the election.

Previously, Britain’s main opposition party has spoken about plans to nationalize privately-owned, and in many cases publicly listed, energy, water and rail companies should they come to power.

Most opinion polls show the ruling Conservative Party with a clear lead ahead of the Dec. 12 poll, suggesting a left-wing government under Jeremy Corbyn is unlikely.

However, the Labour Party surpassed expectations at the previous election in 2017 and a Corbyn victory would be viewed as an unfavorable outcome by many in the financial markets community.

But some corporate bond investors are more sanguine.

“We believe that it would be a quite favorable outcome for British utilities on the debt side as the operating companies of these utilities will become more closely aligned with the UK government,” said one portfolio manager who works for a British fund manager.

As a result, he said the fund he works for has added British utilities to their bond portfolios.

Utilities and telecoms collectively make up more than a third of the 502 billion pounds ($651 billion) UK corporate bond market, according to Refinitiv data. Of this, the energy and power sector makes up about 22.8% while telecoms makes up another 15.7%.

“Labour have stated they want to pursue a model similar to TfL (Transport for London), which has a very close relationship with the UK government and enjoys a very high credit rating as a result,” the investor added.

TfL, which runs London’s underground and bus network, enjoys a credit rating of AA- from ratings agencies S&P Global (NYSE:) and Fitch, just a notch below the UK government.

A source close to that transaction said: “I think the market gave us a really easy time, there were no questions over nationalization… I was actually astonished.”

Investors say the rationale is clear.

“Labour publications suggest that bondholders at the regulated ringfenced level could be ‘honored in full’ and refinanced over a period of time so that the costs of debt are reduced,” said Sharon Vieten, a credit analyst at fund manager Columbia Threadneedle, in a July note.

She said the yield premium that investors demand to hold utility bonds over benchmark UK government debt, known as gilts, could fall.

“We estimate that at the 25-year maturity point, this tightening could reach a scale of 20-45 basis points (of yield) on UK gilts, compared to the current level of 140-160 basis points,” Vieten wrote.

There are also some signs of divergence within the structure of company debt that show investors are playing a nationalization trade.

For a graphic on SSE opco vs holdco debt, bond yields, click https://fingfx.thomsonreuters.com/gfx/mkt/12/8771/8685/SSE%20graphic.png

One caveat is nationalization would require additional borrowing and could push gilt yields higher, hurting the credit rating of the UK government and, by extension, British utility debt.

Ratings agency Fitch warned last week that the election pledges ahead of the vote heighten the United Kingdom’s fiscal risks.

But the portfolio manager said the nationalization plans wouldn’t involve enough borrowing to put the ‘Double A’ UK rating at risk, and wouldn’t deter him from investing in British utilities.