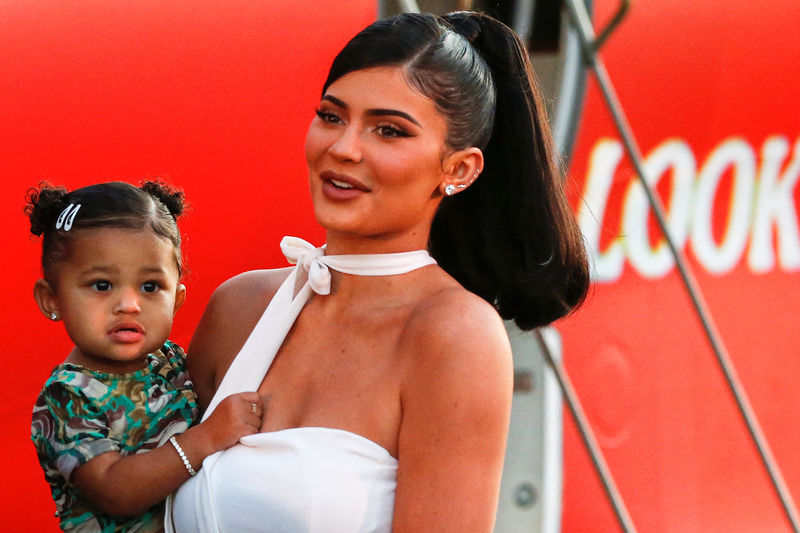 © Reuters. Premiere for the documentary Travis Scott: Look Mom I Can Fly

(Reuters) – Coty Inc (N:) said on Monday it would pay $600 million for a majority stake in Kylie Jenner’s make-up and skincare businesses, as it looks to tap into the reality TV star’s huge social media reach, driving shares in the company up 5%.

The move comes as the cosmetics maker doubles down on its skin care and fragrance products, rolling out new luxury fragrances and lipsticks, while spending more on marketing to combat falling sales.

Jenner, the youngest sibling of the wildly successful Kardashian family, a household name a decade after their reality TV show “Keeping up with the Kardashians” became a smash hit, started her make up line with lipstick kits in 2015.

The kits sold out within minutes of launching, an early sign of the power of her now 270 million-plus social media following, and Coty said Kylie Cosmetics had an estimated $177 million in net revenues over the past 12 months.

“Kylie is a modern-day icon, with an incredible sense of the beauty consumer, and we believe in the high potential of building a global beauty brand together,” said Peter Harf, chairman of Coty’s board.

Jenner brought in sales of an estimated $360 million in 2018, according to Forbes, putting her on its list of self-made billionaires.

Kylie Cosmetics also last year signed a deal with Ulta Beauty Inc (O:) to put her products in all of the retailer’s 1,163 U.S. stores.

The partnership will be accretive to Coty’s net revenue growth of its core fragrance, cosmetics and skin care business by more than 1% per year over the next three years, the company said.

The deal is expected to close in the third quarter of fiscal year 2020, Coty said.