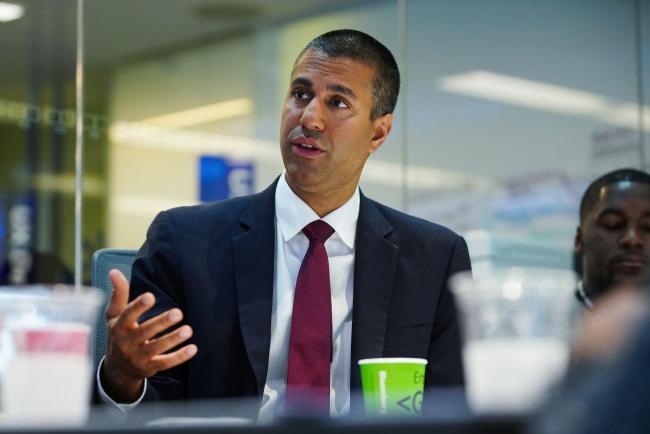 (Bloomberg) — The Federal Communications Commission moved Monday toward controlling a lucrative airwaves sale in a public auction rather than letting Intelsat SA and SES SA conduct a private sale of the frequencies as they had proposed.

The plan, which could slash the satellite companies’ payout by billions of dollars, was announced in a tweet by FCC Chairman Ajit Pai, who, according to agency officials, had earlier discussed the matter with President Donald Trump. The FCC could vote to adopt the plan early next year.

“I’ve concluded that the best way to advance these principles is through a public auction,” Pai said in a tweet. He didn’t say if any proceeds would be earmarked for the companies.Pai said the sale should free airwaves for 5G wireless use, do so quickly and generate revenue for the U.S. federal government.

The satellite companies signaled resistance, saying in a statement they would work toward an alternative and calling Pai’s plan “a significant departure” that “does not address the critical involvement of the incumbent satellite operators” in reconfiguring airwaves uses.

“Intelsat is significantly over-levered, they need a major spectrum windfall to right-size their balance sheet and end up with a capital structure that’s tenable,” said Stephen Flynn, a telecom analyst at Bloomberg Intelligence. “The more uncertainty and the longer it takes, it adds more risk.”

Intelsat and SES — both based in Luxembourg — want to sell some of the airwaves they now use to send shows to TV stations across the U.S. Wireless providers gearing up for fast 5G networks are seeking additional capacity and might buy them. The satellite companies plan to retain enough airwaves to continue servicing TV stations.

The satellite providers’ plan provoked opposition among lawmakers who expressed concern about European companies profiting from the sale of U.S. airwaves, including Senator John Kennedy, a Louisiana Republican who said he called Trump to raise an alarm. Trump called Pai on Oct. 30 and while the issue was discussed, the president didn’t direct the agency on what to do, said an FCC official who spoke on condition of anonymity.

Also Monday, leading Republicans introduced legislation requiring a C-band sale to begin by the end of next year, with taxpayers getting at least 50% of the airwaves’ market value.

“This legislation would get crucial mid-band spectrum into the market to benefit the American people and secure our position as the leaders in the race to 5G,” Senator Roger Wicker, chairman of the Senate Commerce Committee, said in an emailed news release.

FCC officials declined to discuss what portion of sales the satellite companies might get under a public auction. They said the agency intends to begin the sale in 2020.

Intelsat wants to use proceeds to reduce some of its $14 billion debt load, otherwise its leverage could rise to a potentially unbearable level by the end of this year, according to Bloomberg Intelligence.

On Nov. 15, the C-Band Alliance group made up of Intelsat, SES and Ottawa-based Telesat offered to voluntarily pay the U.S. Treasury 30% to 75% of the billions of dollars they could reap if they’re allowed to sell airwaves in a private auction.

The airwaves in question are in the 3.7 gigahertz-to-4.2 gigahertz area of spectrum, known as the C-band. Intelsat and SES dominate that patch of airwaves, which are considered well-suited for 5G networks.

Proponents say the frequencies are needed to help the U.S. beat China in a so-called race to 5G. The alliance that includes Intelsat and SES said its proposal would be quicker than an FCC-run auction.

The C-Band Alliance in its statement Monday said that to “the full cooperation of the satellite operators will be required to ensure the successful clearing of the C-band while protecting the incumbent broadcast services enjoyed by millions of U.S. households.”

(Updates with bond prices in the eighth paragraph.)