Home
Stocks
Kelley Blue Book: First review of the stunning new Polestar 1 hybrid coupe, and when you can get one
Prev Article Next Article

Polestar, which was launched in 2017, is an all-new performance brand from Volvo. The Swedish automaker, now under ownership of the Chinese Zhejiang Geely Holding Group, introduced Polestar to compete in the rapidly expanding electric vehicle sector with an entirely new business model – digital sales, boutique shopping, and a hassle-free ownership experience. This change of direction is much more than a new sales directive. Unlike Volvo, its “safe and responsible” parent, Polestar sees itself as “high tech and exclusive.”

Spearheading the initiative is the brand’s first offering, which is called the “Polestar 1.” This sleek 2-door coupe is visually stunning, with show car styling and a stage presence unlike any other Volvo product before it. But in sharp contrast to the brand’s planned future pure-electric offerings, the Polestar 1 is a gasoline- (PHEV). The Polestar 1 is a premium, low-volume, halo placeholder until the arrival of the slightly smaller and less expensive “Polestar 2” sedan next year.

The design of the Polestar 1 is loosely based on the Volvo Concept Coupe that made its global debut at the 2013 Frankfurt Motor Show. Despite its age, the sculpture holds up strikingly well. With bold and muscular shoulders, a wide stance, and pillarless side windows, the 2-door is distinctive, sleek, and dramatically attractive from every angle. Rather than use steel or aluminum, the engineering team crafted all exterior panels from carbon-fiber composites, which are strong and ultralightweight (their use reportedly shaves 500 pounds off the curb weight). And, to keep the exterior visually clean, there’s a hidden motorized aerodynamic spoiler tucked cleanly flush with the decklid that raises only when it is needed. 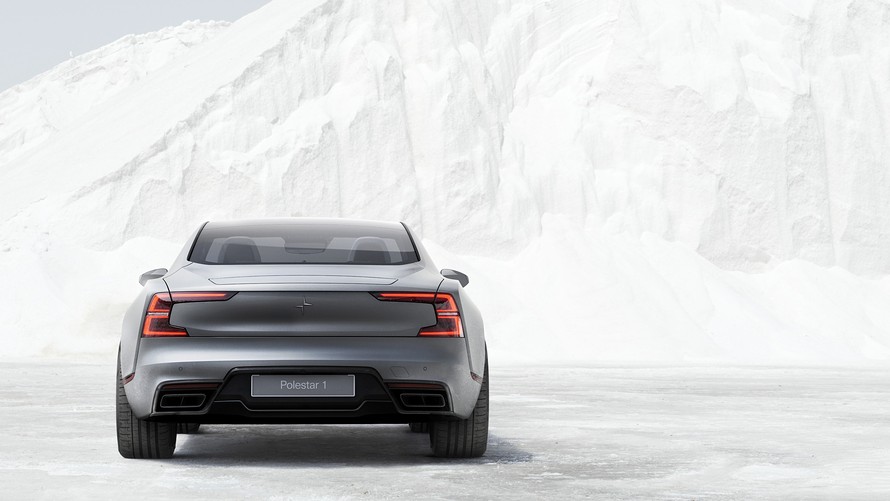 While the Polestar offers plenty of luxury features, it lacks a few expected amenities for the price.

While there is more than a hint of Volvo show car left on the exterior, there’s no mistaking the Polestar’s deep-seated Volvo DNA on the interior. The center console appears lifted directly from the high-volume Volvo XC60, as is much of the switchgear. But few will care, as the materials are premium grade and the driver and passenger are coddled in comfortable bucket seats swathed in premium Nappa leather. However, the token rear seats, which are uninhabitable by humans of any shape or size, will be only be comfortable for parcels, jackets, and groceries. Speaking of storage, there’s also a small rear trunk that will accommodate a few small bags or a set of golf clubs (the rear wall has an unusual clear panel that peeks at the rear battery pack).

Polestar uses a SPA (Scalable Product Architecture) floor structure as its core. The unibody platform is manufactured from steel and then reinforced with a carbon-fiber “dragonfly” cross member (to add a reported 60% increase in rigidity). The roof is made with rigid carbon-fiber tubes that are bonded to the panels, thus permitting thinner pillars and allowing frameless side windows without compromising safety.

The development engineers chose to forgo complex and heavy electronic adaptive suspension in favor of manually adjusted dampers made by Öhlins (a Swedish company acclaimed for advanced racing suspension). These are fitted to double-wishbone architecture at all four corners. While the shocks are preset at the factory, owners have the option to manually adjust them to fine-tune the ride (although we can’t imagine any Polestar owner even knowing where to find the shock towers). The majority of any hybrid vehicle’s braking comes from electrical regeneration from the motors, yet Polestar fits the coupe with robust 6-piston front brakes from Akebono (a Japanese supplier) for higher performance and emergency use.

Mash the Polestar 1’s throttle in “power” mode and the big coupe moves forward with brisk acceleration. It’s not neck-snapping, like the all-electric Tesla TSLA, +0.81%   Model S or Porsche Taycan Turbo, but the thrust increases with speed as the combustion engine builds its accompanying salvo of power. According to Polestar, the 0-60 mph run is just over four seconds (based on our derrière dyno, that number seems spot-on). Yet more impressive is its midrange passing power, where aggressive pedal inputs are countered with a stout push in the backside.

Also read: The best EVs and plug-in hybrids in 2019

Those seeking a less aggressive approach will choose to run in “hybrid” mode, where the rear electric motors power just the two back wheels. Acceleration is a bit more relaxed, but still quick. And, vehicle operation is near-silent. Only the hum of the motors, some road noise, and the whisper of the wind permeate the cabin. Thanks to a 34-kWh battery pack, the coupe will drive upward of 70 miles in this combustion-free setting. Once the battery is depleted, the Polestar 1 automatically reverts to hybrid mode and its gasoline engine delivers another 470 miles of travel (total estimated range, electric and combustion combined, is an impressive 540 miles).

Handling that defies its size and mass

Toss the Polestar 1 into a corner and it settles down immediately without undue bouncing or body roll. Some of the credit goes to the knee-high center of gravity, thanks to a carbon-fiber upper structure and hundreds of pounds of batteries below the load floor. But, more of the credit goes to the engineering team and the brilliant Öhlins dampers – they work nearly perfectly.

Torque vectoring is an added bonus, as each individual rear motor (and a planetary gear set) steer the chassis through corner after corner with near-telepathic accuracy. Driving enthusiasts may be dismayed that the steering effort is unnatural and feedback through the steering wheel is relatively numb, but they won’t be able to fault the Polestar 1’s ability to hold a line through a corner. It is magical for a vehicle that weighs over 5,100 pounds.

The Polestar 1 checks off dozens of the mandatory boxes in terms of luxury and features, but we noted that it leaves a few glaring blanks where discerning customers spending more than $150,000 may raise eyebrows. First, the trunk is spring-loaded without any power open or close mechanism. Second, the telescoping and tilting steering wheel has manual adjustments. Third, there are no grab handles above either door to ease ingress/egress. And lastly, while the sun visors drop straight down to keep the sun out of your face, they unexpectedly don’t pivot to block rays from the very large side windows (we suspect the carbon-fiber roof pillars have something to do with it).

While most of these oversights certainly won’t dissuade the first 100-plus buyers in the States (the total production run is 1,500 units world-wide over three years), Polestar must offer more exceptional appointments than its competition – not fewer – if it wants to establish itself as a legitimate premium player.

Despite being the first vehicle from a new brand, the handful of owners who purchase a Polestar 1 aren’t taking a risk on an unknown – the powertrain is proven, the engineering is solid, and the safety technology is first rate. Instead, owners are choosing a premium grand touring coupe that will turn heads with its exclusivity, pamper its occupants with innovation and luxury, and deliver efficiency far beyond that of any traditional combustion vehicle. For those select affluent buyers, the Polestar 1 is a winner.

How much is the Polestar 1, and when does it go on sale?

Base price on the 2020 Polestar 1 is $156,500 (including destination). The only additional cost option is matte paint, which adds $5,000 to the base price. Production has already begun in China, with first deliveries scheduled for early 2020.