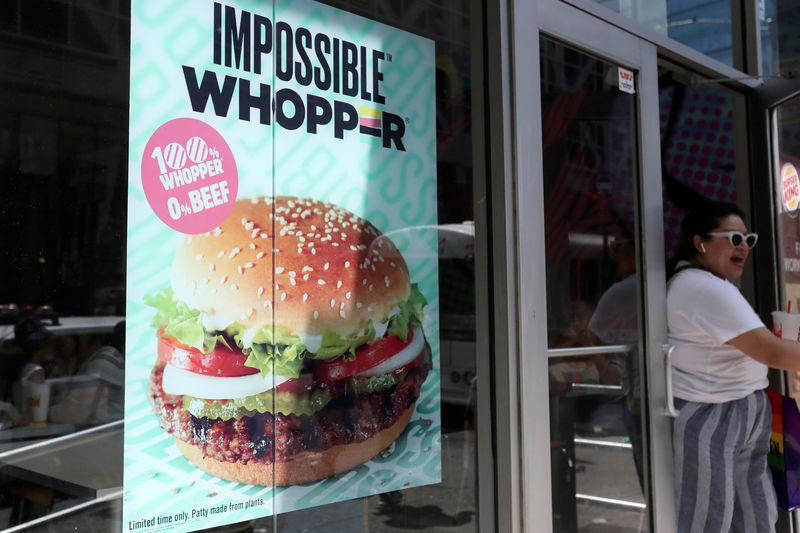 © Reuters. FILE PHOTO: A sign advertising the soy based Impossible Whopper is seen outside a Burger King in New York

By Jonathan Stempel and Richa Naidu

(Reuters) – Burger King was sued on Monday by a vegan customer who accused the fast-food chain of contaminating its meatless “Impossible” Whoppers by cooking them on the same grills as its traditional meat burgers.

In a proposed class action, Phillip Williams (NYSE:) said he bought an Impossible Whopper, a plant-based alternative to Burger King’s regular Whopper, at an Atlanta drive-through, and would not have paid a premium price had he known the cooking would leave it “coated in meat by-products.”

The lawsuit filed in Miami federal court seeks damages for all U.S. purchasers of the Impossible Whopper, and an injunction requiring Burger King to “plainly disclose” that Impossible Whoppers and regular burgers are cooked on the same grills.

Burger King, a unit of Toronto-based Restaurant Brands International Inc (TO:), declined to comment, saying it does not discuss pending litigation.

Its website describes the Impossible Burger as “100% Whopper, 0% Beef,” and adds that “for guests looking for a meat-free option, a non-broiler method of preparation is available upon request.”

Williams’ lawyer did not immediately respond to a request for comment on the disclaimer or the available cooking options.

Impossible Foods Inc, which helped create the Impossible Whopper, has said it designed the product for meat eaters who want to consume less animal protein, not for vegans or vegetarians.

“For people who are strictly vegan, there is a microwave prep procedure that they’re welcome to ask for in any store,” Dana Worth, Impossible Foods’ head of sales, said in a recent interview.